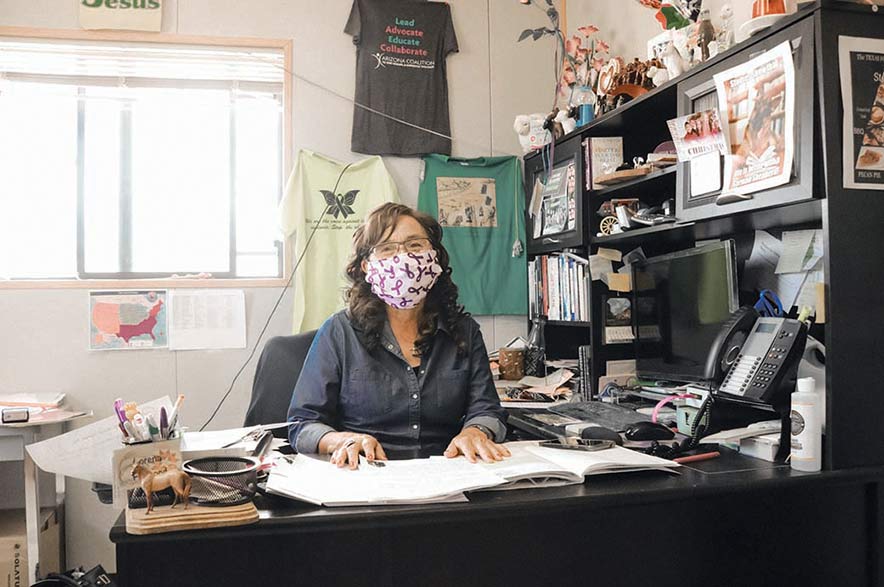 Courtesy photo | Darklisted Photography
Lorena Halwood works in her office at Ama doo Alchini Bighan in Chinle recently. The domestic violence program has received no federal pass-through funds from the tribe since October.

The Navajo Nation’s domestic violence shelters finally got the meeting with Division of Social Services higher-ups they’ve been pressing for on Monday, but instead of solutions to their delayed funding problem, they got yet another couple of roadblocks thrown at them.

“I feel more confused and frustrated than ever,” lamented Carmelia Blackwater, executive director of the Tohdenasshai Committee Against Family Abuse in Kayenta, Arizona, after the meeting.

Last month, the seven DV shelter directors received letters from the DSS informing them that their contracts with the Navajo Nation, which they had thought had already been awarded last fall, were null and void and the new contract period would be June 1 to Sept. 30 (the end of the tribe’s and federal government’s fiscal year), forcing them to spend their whole 12 months’ allocation in four months, with no way to bill retroactively for the expenses they had already incurred.

While they were still reeling from that blow, they got a letter from DSS last week saying they had to resubmit their insurance verification, including the Navajo Nation in the list of indemnified entities, under a new requirement from the tribe’s Risk Management Program.

Also, the shelters that offer counseling or therapy must pay an additional premium for “professional” rather than “general” services. Some of the shelters have already complied with that new requirement. But as of Monday, June 15, none of them had received their new contracts that supposedly started June 1. They had hoped the Monday Zoom meeting, mandated by the Navajo Nation Council’s Health and Human Services Committee two weeks ago, would resolve that issue.

Instead, they got body-slammed again. Social Services Director Deannah Neswood-Gishie told the women that, after researching their contracts back to the original request for proposals advertised by the Navajo Nation last summer, she had discovered yet another discrepancy. The contracts had been issued on a “bed-night” reimbursement basis — in other words, the shelters receive $100 per occupied bed per night.

But the shelter directors also had submitted budgets for supplies, salaries, etc. Since the “bed-night” reimbursement wasn’t listed in the RFP, it couldn’t be in the contract. So the contracts now have to be redone. This means they’ll have to go back through the dreaded “164” process, which requires signatures from the DOJ, the president’s office and the Navajo Nation controller before going back to the DSS to be given out.

“I’m very skeptical and very worried that we’re not going to have our contracts before the end of the fiscal year,” said Lorena Halwood, director of Ama doo Alchini Bighan in Chinle.

“The end of June is two weeks away and they haven’t even situated the contracts yet,” noted Blackwater.

If the tribe’s shelters don’t spend the $1.8 million in federal Family Violence Prevention funds by Sept. 30, they revert to the U.S. Treasury — and it may be difficult to convince the feds they need that money next year, said Jessica Cooper of Roberta’s Place in Grants, New Mexico.

The shelters do seem to have allies in the HEHS Committee. At last week’s committee meeting, even before the new revelations, Vice Chairman Carl Slater called the situation “a catastrophic failing of the Navajo Nation.” But the division falls under the executive branch, and the legislative has little recourse other than to vote not to accept Neswood-Gishie’s report, which they did.

“Where is the president’s office?” asked Slater. “Where is the help for our frontline essential workers?” After Halwood noted her staff had been working nine months with no pay, Slater declared, “That should be a gut-punch to anyone working on this.”

At the meeting between DSS officials and the shelter directors, Neswood-Gishie said that once the money comes in, the shelters could spend it under a line-items like “supplies.” But that doesn’t help them pay their workers or utility bills, and Blackwater worried the shelters would be accused of “double-dipping” if they’re also awarded money from the CARES Act for personal protective equipment and such.

After Ellison asked about the 30 percent the tribe takes off the top of the grant for overhead, the shelter directors got another punch to the gut. Neswood-Gishie revealed some of that money goes to the two shelters — one in Shiprock and one in Blanding, Utah, that the tribe runs — even though the Blanding shelter has not yet opened and has a total of one employee, the director.

“They’re paying her out of our money,” Halwood complained, “and she doesn’t even have clients.” Neswood-Gishie told the women she would be open to any ideas on resolving the situation, which could be emailed to Department of Family Services Manager Regina Yazzie. But in a conference call between the shelter directors after the meeting, no one could come up with anything. Blackwater said she resented being tasked with solving a problem that the shelters didn’t create.

“Social Services is the one that needs to fix their internal policies,” she opined. “The money is there. They just need to give it to us.” The president’s spokesman, Jared Touchin, did not respond to a request for comment by press time.