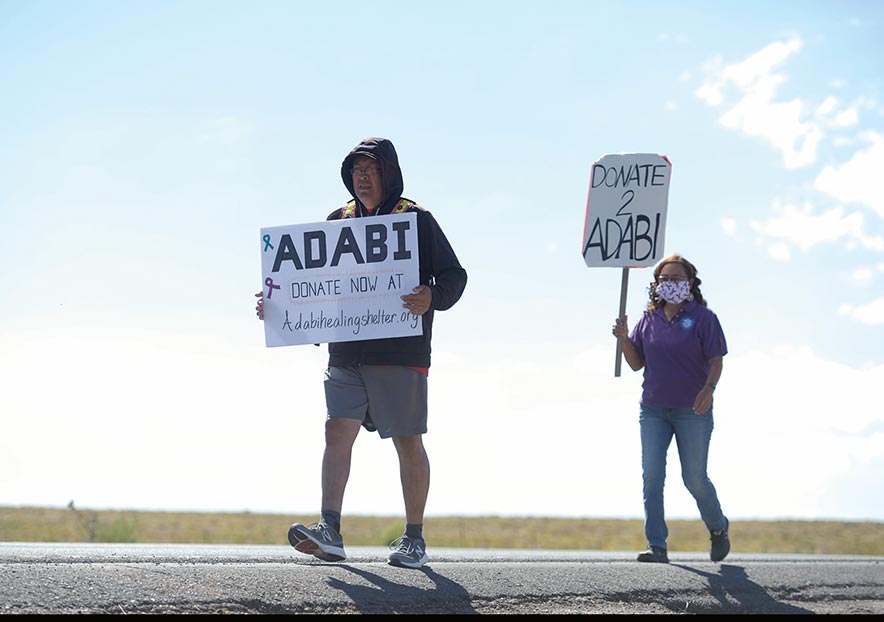 A blister had formed on her foot from walking more than 10 miles along U.S. Highway 191. The pain from the busted blister did not faze the 58-year-old domestic abuse survivor as she dabbed Vaseline on it.

The Navajo Times opted not to identify the woman because her case against her allegedly abusive husband is still awaiting a court hearing. “I been in an abusive situation,” she said of the alleged abuse she’s endured. “It started way back, like maybe 37 years now, and I didn’t really want to come out and tell anybody, you know, because I will get myself in trouble again if I ever did.”

The mother of two joined John Tsosie, founder of Healing the Walking Path Inc., in his walk to highlight the shelter’s need for funding. She said she depends on the shelter’s executive director, Lorena Halwood, and her small staff for just about everything, including getting support and a shoulder to cry on.

The shelter she got a blister for, Amá Dóó Álchíní Bíghan Inc., or ADABI, a domestic violence shelter that has been open since 1989, has been operating with just enough money to keep the lights on.

According to Halwood, the shelter and six other nonprofit domestic violence programs that operate on the reservation received their contracts almost two weeks ago. While that might sound like good news, she said she was on the ropes about whether to sign it because she wasn’t sure she could spend the $250,000 federal grant in two months, which ends on Sept. 30.

Brenda Tsosie, a Navajo Nation Division of Social Services principal accountant, last Wednesday said a no-cost extension could be granted to contracts that have not expended their funds within the allotted time.

The domestic violence survivor said she decided to take a stand for her and her disabled daughter after they were allegedly whipped with an extension cord in November. “That’s when I came down and I showed Lorena (Halwood),” she said. “I said, ‘I want you to know what’s going on in my home, what’s going on with us. I want you to see it now.’ I said, ‘We just came down really quick because we’re being timed.’”

By February, she said they were chased out of the house. With nowhere to go, she said they ended up staying in the Chinle Comprehensive Heath Care Facility parking lot. “I used to fix her bed, make her a bed,” she said. “And she laid in the back seat. And that was sitting up all night. And then the next day we would go home, thinking that everything is probably OK.” It would not be OK.

The two began the routine of living in their vehicle. Finally she went to Halwood for help. “’She said, ‘You should have came here,’ and then she put us up in a safe home for us,” the survivor remembered. “We would come here and then we would eat even though the funding was low. They will prepare a meal for us and we will eat here.”

Then in March, the alleged abusive husband was arrested, she said. But the sigh of relief would not last long. She said he was released. Halwood remembered the day she got a call about his release. “When they first released him,” Halwood said. “I tried calling around, I’m panicking. I told her, ‘He’s been released, get out of the house!’”

It was too late. “He came back and that night,” the survivor said. “He went and hit both of us. He hit me in the mouth, and he knocked up my front teeth. “He was starting to grab things. He grabbed a hammer and he hit me twice. And then I didn’t want to get hit with it again because he’s going to kill me. So I grabbed onto that hammer.”

She said he had pushed her to the ground and allegedly held her down with his boot when a relative of the man came in. “If that guy didn’t come in, I think he would have killed me,” she said. She said she lay still, careful not to cry, or else she’d get another beating, she said.

Around four in the morning, after allegedly smoking meth and drinking alcohol all night, he went into the bathroom. That’s when she said she grabbed her keys and bolted out the door, telling her daughter she was going to get help. “I came down to Chinle and I called the police station and I told them what happened,” she said. “They went back up there and they picked him up, he was already gone.”

He was eventually arrested, she said, and has been in jail since. She says the prosecutor tells her he won’t be getting out of jail until he has his chance to argue his side of the allegations against him.

For now, she said she and her daughter are home, but are constantly on the lookout for him. What ADABI has done for her, she said, has saved her life.

“We’re here to help,” Halwood said. “For the victims, that’s what we’re here for, no matter what. I’m not going to say, ‘I’m asleep, call me back tomorrow.’”

As for funding, Halwood said clothing designer and Orenda Tribe owner Amy Yeung, singer Jewel, former Miss Navajo Radmilla Cody, Chris Beavers and others have helped the shelter stay open and continue providing services, even in the midst of the COVID-19 pandemic. Through their efforts under the new Dzil Asdzaan collective, Halwood said a total of $75,000 was raised for ADABI after equipping the program’s website with a donate button.

Jewel also acquired a sponsorship to help the shelter get diapers. An SUV with OnStar and Wi-Fi capability was also in the works, which, if acquired, could help victims get on the internet and obtain protection orders.

Tsosie said his awareness walk has been going well despite the hot summer conditions. The motivational speaker and activist began his walk on Aug. 3 from Navajo, New Mexico.

“We’re getting a lot of attention,” Tsosie said, who was also nursing his own set of blisters he had sustained during the walk. “We’ve been getting lot of feedback, people wanting to contribute. So in that sense we’re doing, we’re generally good.”

Tsosie begins the third leg of his awareness campaign today at 8 a.m. and will stop at the shopping center parking lot in Navajo on Aug. 20. The following week, on Aug. 26, he will begin the last part of his journey and conclude at the Rio West Mall parking lot in Gallup on Aug. 28.