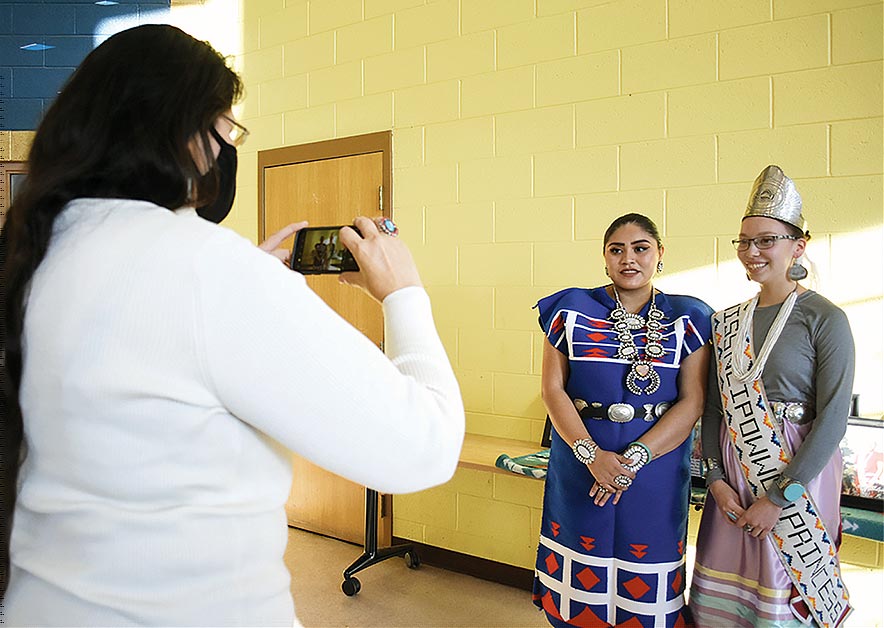 In front of a small group of participants’ families and NCI staff and board members, the coronation was held at Na’Nizhoozhi Center Inc. in Gallup on Jan. 3.

During the coronation, Begay – from Twin Lakes, New Mexico – said she has attended the annual NCI Wellness/Sobriety Gourd Dance & Pow-Wow since she was in elementary school.

She participated in the first powwow with her father and it became a traditional event each year for her and her family.

In 2019, she ran for the title with Martin. Begay was crowned since Martin was too young at the time.

Her annual powwow outings came to a crashing halt when the pandemic arrived in March 2020. Since then, Begay has been helping quarantined families and friends with food and other essential items.

Her experience with the virus has inspired her to go back to school to pursue a nursing degree.

“I really do want to go back to college,” Begay said. “I am thinking of maybe pursuing a career in nursing.”

Like Begay, Martin said she’s been attending the powwow all her life. Her favorite part of the powwow is counting the last few seconds before welcoming a new year.

“In the ending we all get to come together as a community, as a group of people celebrating our culture for another year,” Martin said during the coronation.

Martin shared some of her childhood experiences, which she said were traumatic.

Her late friend, Candice Dean, a star basketball player from Mexican Springs, New Mexico, was killed by a drunk driver in 2020. Martin said she heard about Dean’s death on social media, and she contacted another friend who confirmed it.

“I lost a really good friend to a drunk driver two years ago,” Martin said referring to Dean. “That left an impact within our community, my school, and Tohatchi.”

Dean, who played at Tohatchi High, helped her team clinch a playoff berth in the 2018 New Mexico Class 3A semifinal game against the Tularosa Lady Wildcats at the Santa Ana Star Center in Rio Rancho, New Mexico.

In a May 2021 interview with Navajo Times, Dean’s mother, Marinda Dean, said her daughter planned to attend college in Utah and eventually open a bakery on the reservation because she loved baking.

With that experience, Martin said she was inspired to help make a difference.

“Ever since then I just really wanted to do something about the abuse of alcohol and drugs,” Martin said. “I (would) like to make a difference within our communities to help slow down and put a stop to it.

“This opportunity is the second opportunity I’ve gotten to go for the NCI powwow princess,” she said.

Martin said she is a senior this year at Tohatchi High, where she’ll be graduating with a high school diploma and an associate degree. She stays busy playing sports as well.

NCI opened its doors as a state-licensed, adult, short-term residential care facility from 1992 to 2007.

The Navajo Nation, Zuni Pueblo and McKinley County took it over and formed a board of directors, which restructured in 2013 to include only Gallup and county members.

Since the center opened, alcohol-related emergency visits to the hospital dropped by 33%, according to a NCI brochure.

The last two years, the annual NCI Wellness/Sobriety Gourd Dance & Pow-Wow, which is held on New Year’s Eve, was canceled because of COVID-19.

“It was good to see people come and witness this opportunity to pass on the crown and allow us to have a princess to be able to represent NCI,” Foley said.

Duties of the princess include going out to communities and talking about alcohol and drugs, said Foley, and educating the public about the detox center’s importance needs to continue.

“It’s sad, but just last weekend (Christmas weekend), there were three exposure deaths,” he said. “Three people froze. That doesn’t have to happen in this world anymore.

“This has been going on since the 1800s,” Foley said. “Alcohol is the scourge of our people, and we need to change that.”

Even with the tragic news of the exposure deaths, the brochure stated the number of people freezing to death dropped by 60% since the center opened 30 years ago.

Eighty-five percent of the 438 people who went through the 90-day program have maintained sobriety after six months, according to the brochure.

Martin said she plans to represent the center even when she enrolls in college this fall.

Foley did not say if the annual powwow would be canceled again because of the pandemic.