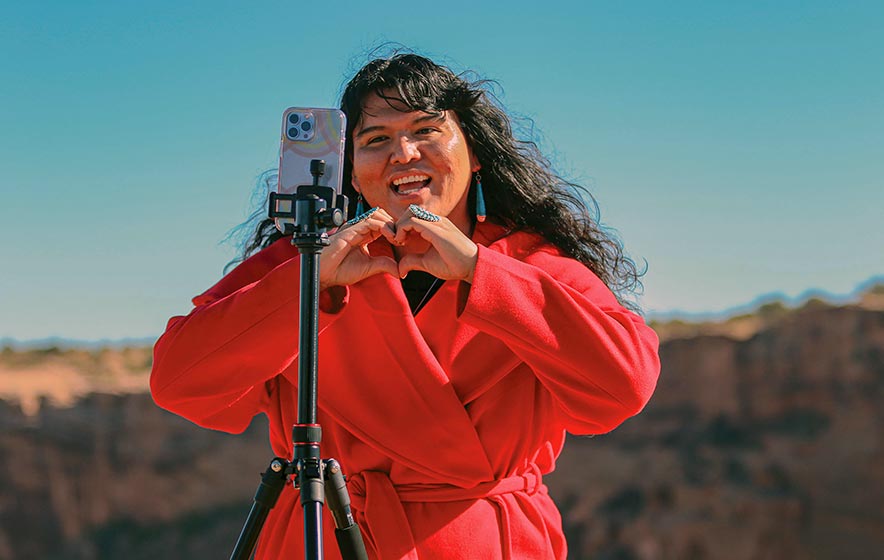 Navajo Times | Cyrus Norcross
Charlie Amaya Scott finishes a TikTok video with a hand sign symbolizing the heart and saying “I love you” near Tséyi Overlook. The video Scott created is about loving the Navajo Nation.

The app TikTok gained users quickly in the last three years and many Diné creators have gained a significant following.

Charlie Amaya Scott (they/she) and Nasheen Sleuth (she/her) are two creators who have been using their TikTok platform to bring attention to topics such as anti-Native racism and Native history.

Scott’s TikTok teaches followers about issues involving Native people either through educational content or fun lip-syncing. Some topics they touch on and teaches about in short videos are two-spirit people, missing and murdered Indigenous women and two-spirit, decolonization, and boarding schools.

They started her TikTok in September 2019 and has a total of 73,600 followers. However, before this, they had a decent following on Twitter.

They said TikTok has helped expand their following with the way they handle themselves and the content.

“TikTok has really changed how I approach my content and encouraged me to be more intentional with what I say and how I say it,” Scott said.

Sleuth, on the other hand, uses a different approach in her TikTok videos. She leans toward a comedic tone.

She uses the character she created, Auntie Mayazhi, as a collective matriarch to speak about culture. She touches on specific topics such as anti-Native racism, COVID-19, the Navajo clan system, and cultural appropriation.

Unlike Scott, Sleuth didn’t have much of a social media following when she started TikTok at the beginning of the pandemic. She has gained a total of 157,000 followers throughout the pandemic. She said it has been interesting gaining and meeting these followers.

Sleuth and Scott both said when it comes to bringing awareness to Native issues on TikTok, a lot of information can be shared in the limited amount of time given.

Scott said explaining complex issues in a limited amount of time takes skill and it’s something they are learning.

“I have three to five seconds to capture someone’s attention and even less to teach them on something as complex as settler colonialism,” Scott said. “And so, being able to do that in a 30-second video takes some skill and I’m glad to be learning this ability to communicate more effectively.”

TikTok gives Native activists a platform to discuss details of activism and issues that either have or are currently impacting Native people.

Some of these that were constantly talked about in the last year were the Line 3 pipeline and the discovery of unmarked graves on the grounds of former/current boarding schools.

Scott and Sleuth believe that, in cases like this, social media is important because it is being used to inform and lead discussions. Social media also gets the information out quickly. It can be a tool of resistance.

Sleuth said sharing activism helps to raise the voices of Native people and connects those from different tribes and nations with one another. 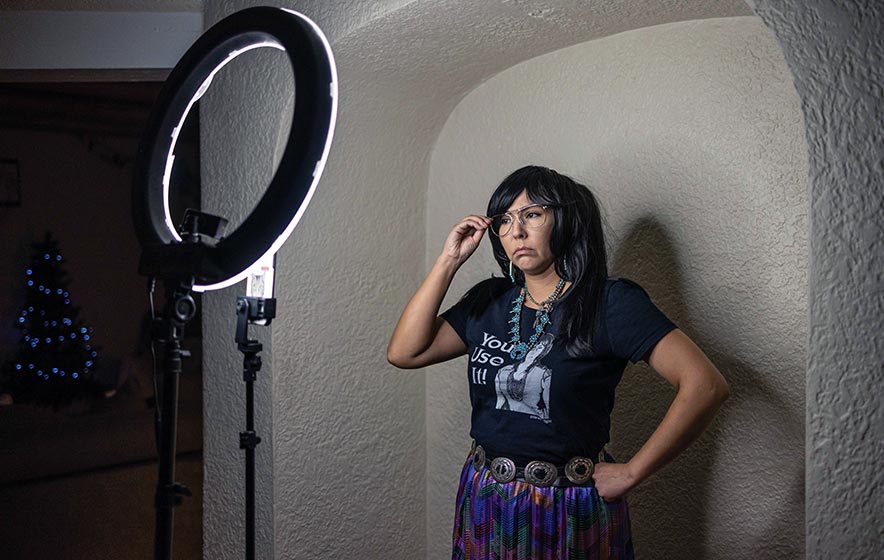 Special to the Times | Sharon Chischilly
Nasheen Sleuth portrays Auntie Máyazhí for a TikTok video on Nov. 22 in Albuquerque.

Scott believes online Native activism allows people to get involved because of the access they have.

“It provides on-the-ground access and personalization of issues that many of us are passionate about,” Scott said, “which allows us to really humanize these issues and inspire people to get involved with Native activism.”

However, TikTok creators do not use the platform only to teach non-Natives and for activism. They also use them to connect to Native youth through humor and by inspiring joy through Native pride.

Sleuth said Natives and Native youth are thankful for the creators who share Native cultures because many grew up away from the reservation and/or do not have anyone to teach them.

Scott believes that Native TikTok creators inspire Native youth by being the representation that they can see themselves in.

Scott uses herself as an example and said that they have become the representation she needed as a child being Native, queer and transgender.

“What I learned through this, though, is that social media really provides complex and diverse representations of Indigenous brilliance and that is inspiring and affirming to Native youth,” Scott said. “We have access to people who look like us, who are us, and that is beautiful.”