The annual event to honor and remember the first Native American woman to pay the ultimate sacrifice during the Iraq War in 2003 begins today. 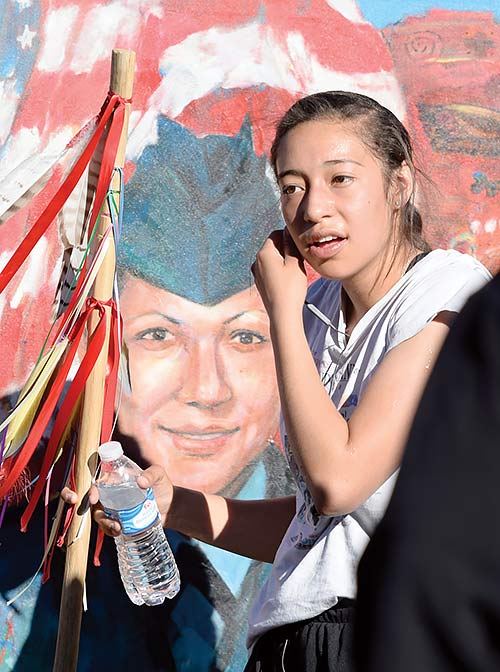 Navajo Times | Donovan Quintero
Sixteen-year-old Carla Piestewa, daughter of fallen soldier Spc. Lori Piestewa, who was with the 507th Maintenance Company in Fort Hood, Texas, walks with an eagle staff in hand she ran with to the top of Piestewa Peak in March 2016 during the Sunrise Service at Piestewa Peak in Phoenix.

Three days later, Piestewa and the 507th were performing their mission of hauling supplies and helping combat units like the 3rd Infantry Division from Kuwait.

According to U.S. Army accounts, on March 23, a wrong turn due to a navigational error proved to be fatal. The single mother of two – Brandon, 4 at the time, and Carla, 3 at the time – along with Pfc. Jessica Lynch and 11 other members of their unit and two Marines were caught in an ambush in the southern part of Nasiriyah, Iraq.

The Humvee Piestewa was driving was hit by a rocket-propelled grenade. Piestewa and Lynch, along with Spc. Shoshana Johnson were captured. Three other people who were in the Humvee, the two Marines, and another member of their unit were killed.

Piestewa, a Hopi who grew up in Tuba City, sustained injuries from the explosion.

The three women were shown in a video, which reportedly showed Piestewa. She eventually succumbed to her injuries the same day. Lynch would later be rescued.

Since her death, the annual Piestewa Fallen Heroes Memorial has been held in the Phoenix area. This year, the two-day event will begin with the Honoring Our Fallen and Their Families at 5:30 p.m. at the Holy Trinity Greek Orthodox Cathedral (1973 E. Maryland Ave.).

Chischilly was severely injured when he stepped on an improvised explosive device on Oct. 9, 2010. He’s scheduled to give a presentation during the dinner called “Overcoming Adversity.” Humetewa is the guest speaker.

On Saturday, the Piestewa Fallen Heroes Sunrise Memorial will be held at Piestewa Peak in Phoenix. The memorial is expected to begin at 6:30 a.m.

A posting of colors will begin the ceremony followed by the singing of the national anthem by 2012 Miss Native American USA Shaylin Shabi. A sunrise memorial and a flag song will be done by the Phoenix Oyate Singers.

A recognition of Gold Star families will be held after a blessing ceremony. After that, Joseph Hudson, a friend of Piestewa, will do the Remembrance of our Fallen Heroes.

Near the conclusion of the memorial, Piestewa’s family will speak.

Here is a list of the Gold Star families who’ll be recognized: