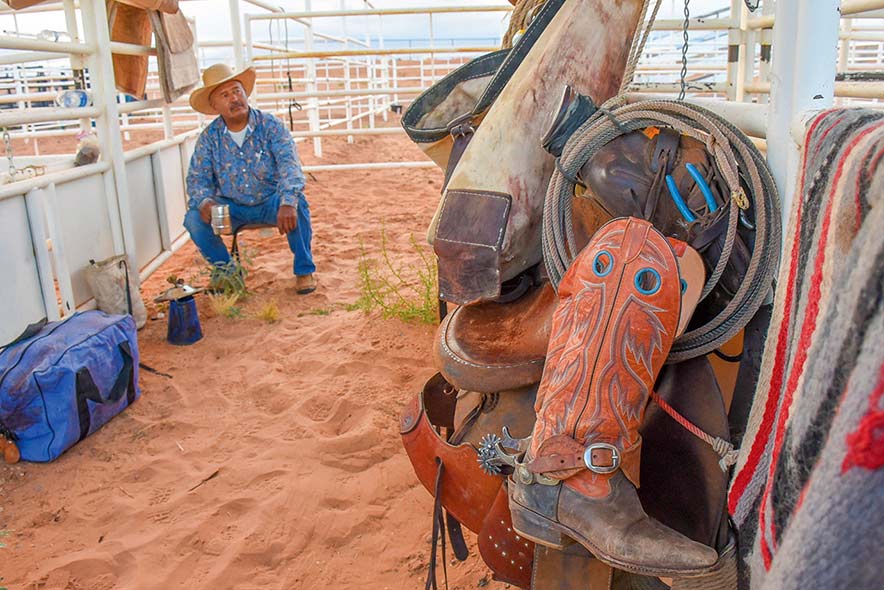 Navajo Times | Krista Allen
Gene Shepherd’s pair of peony-red cowhide Tony Lama boots and Western saddle gear hang on a panel at the Western Navajo Fair rodeo grounds, where Shepherd sipped coffee and talked about his travels before making his way to the confluence of the Colorado and the Little Colorado rivers during the Fourth of July holiday.

When he arrived at the Confluence Overlook on the eastern rim of Bidáá Ha’azt’i, he made an offering with tá’dídíín.

Akałii Gene Shepherd, a skillful equestrian and a rancher from Rocky Ridge, Arizona, said he’s never been down at river level, at Tooh Ahidiilíní, where the turquoise water of the Little Colorado River flows into the more prominent and darker Colorado – sacred to at least 13 federally recognized tribes in the region.

Shepherd arrived at 11:30 a.m. on July 2. He saw the sagebrush desert for miles, almost untouched, except by wild horses and livestock, and the area where developers wanted to build the billion-dollar Grand Canyon Escalade with hotels.

“In the old days, the people used to take mules and donkeys down there, pack them up with salt and take it all the way back up,” Shepherd said. “It’s a sacred place where Áshįįhí Asdzáá resided.

“In the old days, it was considered one river (Bitsíís Ninéézí),” he said. “There’s a sacred name, and when you’re crossing those rivers, you utter those names for them. You make an offering, and you always carry your tá’dídíín.” 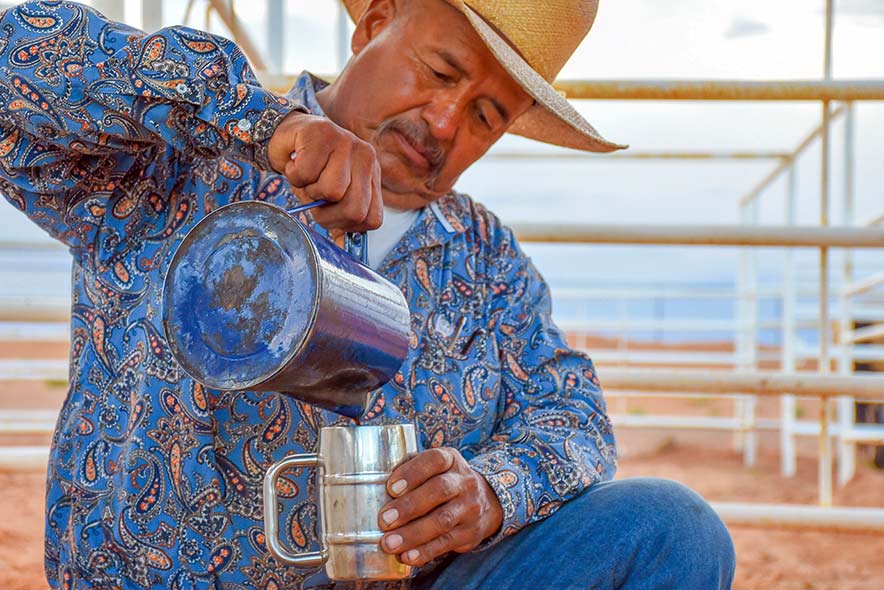 Navajo Times | Krista Allen
Gene Shepherd pours himself coffee he boiled over a bottle-top propane camp stove at the Western Navajo Fair rodeo grounds in Tuba City, where he camped for one night en route to the confluence of the Colorado and Little Colorado rivers.

Shepherd left his home in Rocky Ridge at 6:30 a.m. on July 1, hoping he’d make it to the overlook by July Fourth.

Together with the buckskin horse “Lonesome Cowboy” and dog “Tonapah,” they powered through the morning on an English saddle until noontime when Shepherd’s wife, Gwenda, delivered a more comfortable Western saddle, supplies, and “Midnight” just before crossing the Coalmine Canyon area.

“I packed saddle on (Lonesome), and I jumped on Midnight,” Shepherd said.

Because Tonapah tired out, it headed home with Gwenda.

Hours later, Shepherd and his horses made it to the Western Navajo Fair rodeo ground, where a horsemanship clinic was in progress.

He had a Navajo Taco dinner with the participants that evening, after which he mingled with some old friends before camping under the announcer’s stand.

He said sleeping at the rodeo ground reminded him of competing in the saddle-bronc competition in this arena in the good old days.

“I slept real good,” Shepherd said. “I didn’t go to sleep until close to 11 p.m. I was going to sleep on the grandstand, but it was raining on and off.”

He said his camping gear is comprised of a canvas, sleeping bag, small stool, blue enamel coffee pot, and a single portable burner for brewing coffee and making meals quickly.

But ahwééh is the most important.

“I carry (the burner) with me all the time,” Shepherd said. “And my (Folger’s) ground coffee is right here, and I carry all my coffee stuff in a little bag.”

He said the enamel coffee pot he bought at Burnham Trading Post in Sanders, Arizona, had seen a lot of miles across Diné Bikéyah.

Like many people, he lost the lid “somewhere” on the trail.

Shepherd has traveled across the Nation with his horses. He’s traveled to events such as Ééhániih Day in Naatsis’áán, Arizona, and the Western Navajo Fair.

This Fourth of July, he decided to travel to Tooh Ahidiilíní to reconnect with the land in the west and see the ancient trail of Áshįįhí Asdzáá.

Shepherd said he knows the Navajo names of many places here, such as Bikooh Dootł’izhii, Beegashii Habikéé’, and Tsii’áál, where there’s tobacco – most likely Diné don’t know about.

“There’s a trail that comes out of the canyon where cows have been walking for probably over 100 years,” he said.

Shepherd said livestock know they must step in the hoof imprints, or they’ll slip and fall into the canyon, where there’s a pile of animal bones.

“Your horse has to jump up to the ledge, then you lead them up,” he said. “I’m going to come here again during the Western Navajo Fair in October. During that time, the days are shorter, and we won’t get here until after sundown.”

Shepherd said he’ll leave for Naatsis’áán at the end of the month and arrive at the Ééhániih Day ground in eight days.

His usual route begins at Padres Mesa, going through several communities, including Keams Canyon and Polacca.

From the sacred red-rock temples to the blue-green waters, developers want land for projects near Bidáá Ha’azt’i.

They say their development would “bring jobs and help the Navajo economy.”

“Eventually, they’ll get their way,” Shepherd said. “Maybe not in our lifetime, but when we’re gone.

“All these young people, they’re going to give it away,” he added. “Eventually, someday, they’ll put something there.”

But in the meantime, Shepherd says, the best way to navigate Diné Bikéyah and its canyons’ slopes is by horse, and lodging is anywhere – a lesson in millions of years of Diné history.