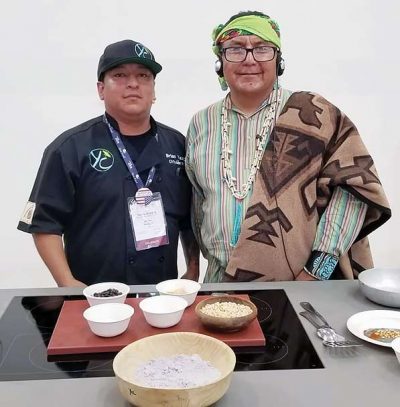 Chef Brian Yazzie of St. Paul, Minn., left, and rancher Roy Kady of T’iis Nasbas, Ariz., pose at the Terra Madre event in Turin, Italy, with ingredients they brought from the Navajo Nation.

You wanna talk about slow food?

It has taken traditional Native American cuisine a thousand years to be recognized in international foodie circles … but it’s finally making some waves. In the slow food world, of course.

“Slow food” is a reaction to fast food — the mass-produced, corporate-controlled, over processed substances that pass for nourishment in most of the world today.

Fast food is easy, that’s for sure … but, according to its critics, it has displaced centuries-old farming and cooking techniques, knocked the spiritual aspect out of food production and led to a worldwide rise in obesity and diabetes.