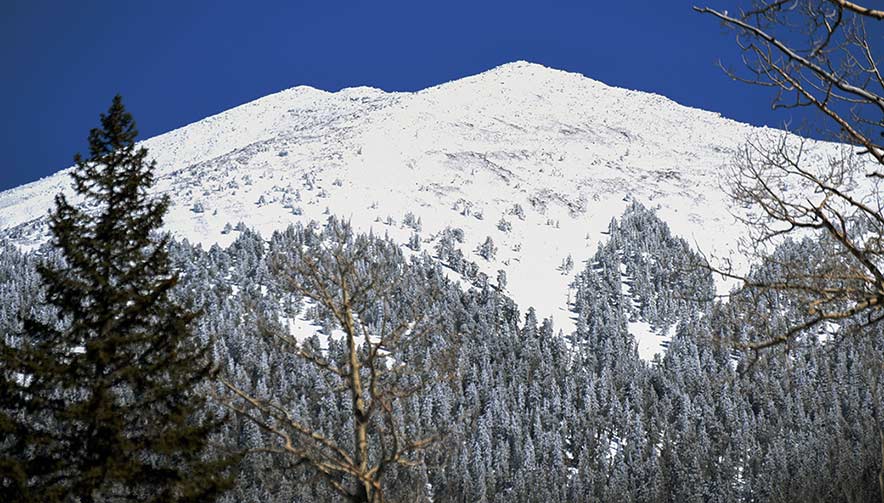 Special to the Times | Krista Allen
The San Francisco Peaks, Dook'o'oosłííd, are covered with snow Feb. 18, 2021, in Kinłání.

A new master plan, which has been two years in the making, outlines projects envisioned to be completed over the next 15 years. The proposed projects would increase the recreational opportunities that can be offered at Snowbowl without expanding the current ski area boundary of 777 acres.

The master development plan, or MDP, establishes a vision and a proposed enhancement at Snowbowl, said Rob Linde, the general manager at Arizona Snowbowl on Dook’o’oosłííd.

“There are certainly some exciting developments for Snowbowl for both winter and summer,” Linde said. “Our hope is to improve the resort and address many of its current shortcomings.”

Linde said one of Snowbowl’s primary objectives is to create more indoor facilities to keep people out of the cold and the elements at 9,300 feet.

“Sitting on the floor in an overcrowded lodge is not a great experience and it’s crucial that our guests are comfortable at Snowbowl,” Linde said. “Another key element of the plan is to broaden our summer activities.”

At the top of the list is to create a brand-new mountain bike park along with other types of summer mountain adventures in addition to new lifts, expanded trails that elevate the overall mountain experience, said Linde.

“All of the enhancements are within the existing ski area boundaries,” Linde said. “Through all of this, we recognize the cultural heritage and spiritual significance of the San Francisco Peaks. We consider it a privilege and understand the great responsibility of operating this recreational facility in such a special place.

“We respect and plan to work with the indigenous people who consider this unique mountain sacred. We’re humbled to provide a place where so many people can enjoy the incredible scenery and natural environment of the Peaks through skiing, snowboarding and summertime activities.”

Linde added that it’s important to note that the MDP does not constitute an approval of planned projects. Each of the proposed enhancements will be strictly analyzed with environmental impact studies followed by the National Environmental Policy Act review process.

Environmental activists, along with members of the Indigenous Circle of Flagstaff, are asking Congressman Tom O’Halleran, who sits on the House Committee on Agriculture, to hold an oversight hearing to review the Arizona Snowbowl.

“We would like for Arizona Snowbowl and the Forest Service, their relationship and history of decision-making records to be examined closely,” said Christopher Jocks, who’s Kahnawake Mohawk, a senior lecturer in the applied indigenous studies department at Northern Arizona University.

“We’re challenged,” Shawn Mulford, who’s Diné, told O’Halleran during his stop in Flagstaff en route to Page and to LeChee.

“We’re all with masks on and that was prophesied already,” Mulford said. “There’s more (challenges) coming on the horizon if we don’t straighten ourselves up and start adhering to the laws and the rules of nature, of God’s creation. This – (including the coronavirus pandemic) – is just the tip of the iceberg.”

Mulford said humans are the ones impacting the physical environment in many ways such as deforestation for the expansion of Snowbowl. He said changes like these have triggered things like soil erosion and undrinkable water.

“The foundation of this nation was built on the papal bulls in the late 1400s and we have to acknowledge that so we can begin to address it,” Mulford explained. “When we talk about sacred sites, we also have to look at the papal bulls.”

The papal bulls are edicts made by popes Nicholas V and Alexander VI in the fifteenth century that instructed European explorers how to treat Native people. The Vatican directives became the basis of centuries of discriminatory laws in Canada and in the U.S.

Mulford also alluded to the Johnson and Graham’s Lessee v. William M’Intosh court case that held that private citizens could not purchase lands from Native Americans.

The opinion of the court suggests, “The ceded territory was occupied by numerous and warlike tribes of Indians; but the exclusive right of the United States to extinguish their title, and to grant the soil, has never, we believe, been doubted.”

“I doubt it,” Mulford said. “I’m sure the Creator doubts it. So that’s the challenge that we’re having, that we have two foundations here.”

“But we better get ourselves together because we’re here with masks on,” Mulford added. “And we’ve got to figure out how we’re going to come to the table with these disagreements and these misunderstandings, and to put ourselves together in the right (direction). We’re hopeful to sit down and schedule a meeting (with the House Committee on Agriculture).”

Impacts on way of life

Lorenzo Max, vice president of the Diné Hataałii Association, said there is great concern over the expansion of the Arizona Snowbowl, a private concession of the Forest Service, which uses reclaimed wastewater to make snow.

The wastewater not only contaminates the 777 acres Snowbowl is situated on but also the rest of the sacred San Francisco Peaks, said Max.

“As a traditional hataałii I have the responsibility with moral and ethical obligation to protect, just as any clergyman or clergywoman would to protect their place of worship or church, shrine or temple with elaborate cathedrals,” Max explained.

“Our hataałii places of worship are connected to nature and it is done in a hogan or dwelling, or under a tree sitting in a circle on the ground out in the open,” he said.

Max pointed out that non-Natives may not understand that Dook’o’oosłííd is only one of the sacred mountains that mark Diné Bikéyah and the foundation of the Diné.

“The sacred peaks are living deities,” Max said. “They guide us on the path with light. They are our mother and our leader just like the Ten Commandments that were brought down from Mount Sinai in the Old Testament.”

Max said the sacred mountains give Native Americans in the region similar commandments with mountain songs that take four nights to finish.

“These (mountain songs) mention our historical ancestral knowledge,” he said. “The mountain commandments teach us not to lie. They teach us to foster into a state of hózhǫ, meaning happiness, love, harmony and compassion.

“Hózhǫ is our foundation for living a long and healthy life,” he said. “They teach us about family and the respect we must have. This love extends outward into the world.

“And they teach us that we’re related through kinship we call k’e,” he said. “This means we’re related – through k’é – to the animals, the wind, the trees, the mountains, the water and everything else in the universe. We’re all connected.”

“Today, I see something very dangerous happening here: (The use of sewage effluent to make artificial snow),” Max added. “It has disrespected (the Natives) in the highest degree. And songs and ceremonies related to (Dook’o’oosłííd) cannot be conducted because of the disturbance.

“Our voice has to be heard,” he said. “(Dook’o’oosłííd sustains our well-being and forms our identity.”

“There must be protection for our sacred mountain,” Tenakhongva said. “(The Hopi) have sacred shrines and sacred sites there.”

Tenakhongva said some of the sacred sites that are near Dook’o’oosłííd – home to the Hopi deities, Cloud Gods and the Katsinam – include Sunset Crater, the Awatovi Ruins and Wupatki.

“Snowbowl damages all life,” Tenakhongva said. “The most recent one is the expansion without consultation, without any appreciation of life for the Native American tribes.”