Daughter donates part of her liver to ailing mother 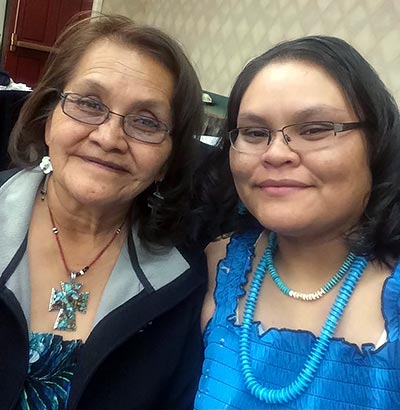 Courtesy photo Lynelle Ramone, right, sacrificed part of her liver so her mother, Helen, could live.

Before Helen Ramone was about to go into surgery for a liver transplant, she thanked her daughter, Lynelle Ramone, for being her donor. “I told her, ‘Thank you, Daughter. Thank you so much,’” Helen emotionally recalled of the November surgery. “She said ‘Mom, you always told us that it’s hard to grow up without a mom, so I need to help you.’” After they both prayed for a safe and successful surgery, Lynelle was taken into surgery first to remove part of her liver, followed by Helen.

The operation was a success, but now the family is trying to get the finances needed to help Helen have the means to stay in the transplant recovery home near Denver, and to assist Lynelle with her own expenses that she’s been accruing since she hasn’t been given the green light to go back to work. The Ramones are a tight-knit family who have navigated the tough times together. Helen’s clan is Tsin Sikaadnii.

When Helen was diagnosed in 2015 with non-alcoholic steatohepatitis, better known as fatty liver disease, it was her daughter, LaSheena Ramone, who eventually moved home to Casamero Lake, New Mexico, from Tucson in order to be her mom’s caregiver.

“When she was diagnosed with her sickness … but up until two years ago I moved back,” said LaSheena. “It’s because her symptoms started to get worse. She was home with my dad and brother but I took the responsibility of wanting to take care of both my parents.”

LaSheena said as time went on Helen’s condition began to worsen and she started to experience “episodes.”

Trying to address the issues the family tried to get Helen seen and after about a month of no success, she was finally able to have a checkup. Doctors found fluid in Helen’s stomach, which had to be drained.

After another checkup, the doctor told Helen she needed a liver transplant. “My GI doctor said, ‘Well, Ms. Helen, it seems that your health is going down,’” said Helen. “’You’re not supposed to be going down this fast. The only option is to get a liver transplant.’” At this time COVID-19 had hit the Navajo Nation and Indian Health Service hard.

The entire country as well as the Navajo Nation was still figuring out how to operate in this new world. It only caused more running around in circles for the Ramones when trying to start the process of getting Helen the transplant she needed. “We had to go between Crownpoint and Albuquerque,” said LaSheena. “Because COVID was getting serious, everything was closed.”

In this new COVID-19 environment the process had to start electronically. Eventually the Ramones were given the option to either have the transplant done in Texas or Denver. They chose Denver. Getting the hospital picked was one hurdle, but after a few more checkups and more waiting, the next obstacle would be finding a living donor, which Helen said her doctor suggested because it would be much faster.

Here was no hesitation whatsoever from her five daughters and two grandchildren to get tested to see if they would be able to donate part of their liver to the matriarch of the family. LaSheena, who is an electrical engineering student at Navajo Technical University, said she wanted to be the donor because financially she was secure. But she didn’t qualify.

Out of all the sisters, Lynelle was the perfect fit to be her mother’s living liver donor. “The reason I did it is because you would basically do anything for your mom,” said Lynelle. “She is the one who gave me life, and I thought of it as away to give her life back.” Although happy to find a donor, the family was still concerned about the process.

It wasn’t long before this that Helen’s younger sister was going through a similar operation. Her illness impacted both her kidney and liver and the severity of her illness was greater than Helen’s.

During the operation Helen’s sister’s heart stopped and she passed away. So when Helen got word that she would have her operation in November, she remembered asking to go to the mountain to pick piñons for her children as she thought of the upcoming surgery.

“I had a younger sister who had the same problem but we didn’t know until she got really sick from it,” said Helen. “She didn’t make it through the surgery. That kept going through my mind. “That’s why I was scared,” she said. “But a lot of my family and friends kept telling me I’m a strong lady. They gave me words of encouragement, prayers; they even gave me donations, even five dollars.”

Not only was Lynelle qualified to be a donor, but she also proved to be somewhat of a medical marvel. She said she had given less than 50 percent of her liver to her mom, and since the operation she has been recovering strongly and quickly, much to the surgeon’s surprise. “They said I was one of the few that took the transplant the strongest,” said Lynelle. “They said it was going to be painful afterwards, but in all actuality I did not feel pain. There was soreness, tightness, but hardly any pain that came with it.”

Surgery may have been a breeze for Lynelle, but the financial aftermath is taking its toll on her and her family.

Since the November surgery had happened faster than they expected the family wasn’t able to prepare as much as they would have wanted moneywise. Lynelle is the guardian of two children, and the hospital hasn’t given her the OK to start work again.

She doesn’t qualify for unemployment, and the rest of the family is giving what they can while also paying their own bills. “I’m still not able to go to work because I have a weight lift restriction,” said Lynelle. “My doctor said they won’t (allow) me to work for six to eight weeks just to make sure I fully heal on the inside.

They don’t want me to have a hernia.” For Helen, she has to stay in Denver in order to regulate her medication. She’s been staying at a recovery center, which costs $840 a week, with LaSheena. But because it’s so expensive Helen said they will probably have to move into a hotel instead.

“The first week after surgery was tough and I struggled,” said Helen. “The doctors and nurses were good. I have my ups and downs. One day I’ll be up and around, and then the next day I’ll be back to Square One.” The family has a Gofundme account, and is appreciative of all the donations they receive thus far.

Information: To donate, got to gf.me/u/y4ihz2. To learn about fatty liver disease, which affects about 3 million Americans a year, visit https://www.niddk.nih.gov/health-information/liver-disease/nafld-nash