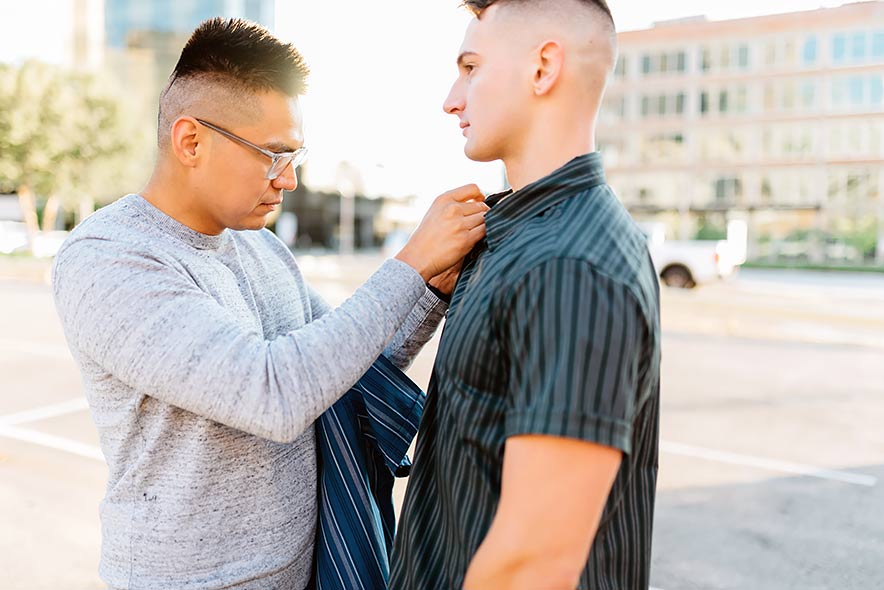 Courtesy photo
Hashké Reno Tsosie, 27, of Sweetwater, Ariz., buttons a model wearing a piece from his collection, Northern Travel at Dusk, from his fashion label Hashké – a menswear line that centers Diné culture with storytelling and fashion.

Ever since flipping through pages of fashion catalogs as a boy, Reno Hashké Tabaaha Tsosie, 27, knew he would be in the fashion industry with his own label.

He credits his inspiration to become a designer, innovator and entrepreneur to his early childhood memories of seeing the creativity of his late mother, Anita Tsosie, of Sweetwater, Arizona. He would watch her sit at her loom strings and create rugs. He’d also gloss through Dillard’s department store magazines.

“I’ve always been interested in fashion,” Tsosie says, noting that his earliest memories saw him draw models and clothes in elementary school. “I carry that with me. Both of my parents were artists.”

Originally from Sweetwater, Tsosie grew up in Cortez, Colorado, and Farmington, New Mexico. His maternal clan is Tábą́ą́há and he is born for Táchíi’nii. His maternal grandfathers are Hashtł’ishnii and paternal grandparents are Ta’neeszahnii.

Always a good student, like his sister Carrie Tsosie-Jim, he also graduated from Stanford University, where he studied American studies with a concentration in arts and culture, and costume design training from the school’s theatre department.

That led him to the fashion world in New York City and other high-end capitals. In New York City, he worked at New York Fashion Week under the houses of Dennis Basso and J Mendel.

At J Mendel, Tsosie worked in women’s luxury, and learned behind the scenes how a fashion house operates from a concept to the public and then to the buyer.

“That was a good experience and it was honestly a sprint to get things out,” he recalled.

After J Mendel, Tsosie worked in luxury home décor with Neiman Marcus in Dallas. There, he worked on brand development and one-on-one with designers.

Tsosie is also an alumnus of Neiman Marcus’ Executive Development Program, where he gained more understanding of leadership in the world of fashion, according to his website.

In 2018, he left Neiman Marcus to create his label – Hashké – a menswear line that tells about Diné culture through stories and fashion.

“I created this brand – Hashké – as a way to offer something authentic,” Tsosie said, while also citing his middle name for his brand’s inspiration.

He explained that one of the factors that also influenced his launch are the consistent cultural insensitivities and exploitation of Indigenous culture in the fashion industry.

Too many times, he said, he has seen misrepresentation of Diné culture among fashion designers. For example, one collection that offended Tsosie tried to portray Diné culture as leather and fringes under the theme of “Navajo Nation.”

Basically, it was a lot of “Bohemian-style looks,” Tsosie said.

He had to educate his colleagues about what is Navajo/Diné. It is a people, a language, a way of life, he said.

“Navajo Nation is not a trend,” Tsosie remembers telling his colleagues. “It is a recognized, functioning government and body of people. Even if you’re going to use Navajo as a trend, none of these things shown here represent what it is.”

Luckily, the cultural lesson from Tsosie resulted in a new name for that collection. Another cultural appropriation example Tsosie saw was with a French brand, which had appropriated the Diné Tree of Life rug design on the back of a thousand-dollar sweater.

“There was no mention of Navajo, or Native American,” he said. “There was no credit given at all. It was not a re-creation of any sort of piece, but they (the French brand) literally took someone’s tree of life.”

The French company’s rationale was that it had taken inspiration “from the real and imaginary” for its concept.

“It was very offensive. A lot of it was pseudo-spiritual things of what they thought Native American was and the primitiveness of land,” Tsosie said.

Tsosie’s efforts to get Diné and Native artisans credited for looks at fashion houses essentially inspired him to launch his label. He has more creative freedom now as a Diné designer and storyteller.

“I wish there was something that was out there that was authentic that was not traditional clothing,” Tsosie remembers telling a vice president, adding that his initial idea was to launch a brand in the luxury market: “something new and a contemporary version of Navajo fashion.”

But, after learning how the luxury market basically targets the one percent and how those types of fashion looks generally are worn only once, Tsosie thought a brand inclusive of all would be the best outcome for his fashion career. He then began thinking about the overall industry and then decided on the opportunity to launch Hashké.

To be sure, he polled close friends and family members about any cultural insensitivities and whether he was culturally appropriating with Hashké.

“I really fell in love with Hashké having a very layered meaning. It is associated with leadership and a lot of strong emotions that tend to lean to masculine emotions of anger, determination, strong-willed,” Tsosie says about how he chose his fashion name.

To date, Hashké features two collections – The Emergence, which is now retired, and Northern Travels at Dusk.

Consumers can buy five designs under the Northern Travels at Dusk collection, which range in prices from $100 to $115 for short-sleeve men’s shirts.

This theme focuses on maintaining mental harmony, he said, before adding, “I reflected on the experience of walking alone at night on the northern edge of the Navajo homeland.”

When a consumer buys a look, Tsosie will send a postcard along with the order to explain aspects of Diné culture, such as with historical figures and tricksters of the Diné universe.

“The mission of Hashké is to create menswear that draws from Navajo culture and share the Navajo journey through artistic storytelling,” Tsosie said.

With the worldwide pandemic, Tsosie said he has made sure to maintain a strong digital presence, and is relying on Diné and Native social influencers to amplify and promote his label.

The long-term goal for Hashké is to bring viable jobs to Diné people and help build a diverse economic portfolio for the Navajo Nation.

“While this is just beginning, I have a long-term vision for the brand,” Tsosie said. “Today, Hashké supports a small group of creators and artisans, but tomorrow I would like to bring jobs and economic diversity back to the Navajo Nation.”