‘Fight Like A Woman’ continues Sihasin’s journey to healing 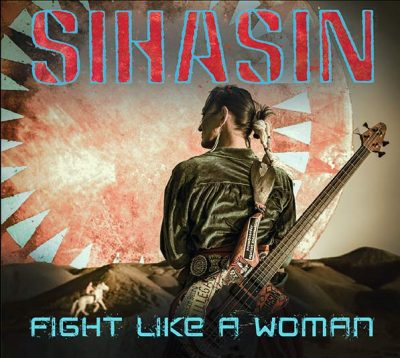 Courtesy photo
On April 22, Sihasin will host a release celebration for their new album “Fight Like A Woman” at the Orpheum Theater in Flagstaff in conjunction with Earth Day activities.

Sihasin is a Navajo band thinking with hope and reassurance.

On April 22, Sihasin will host a soft release celebration for their new album “Fight Like A Woman” at the Orpheum Theater in conjunction with Earth Day activities. Jeneda (bass) and Clayson Benally (drums), formerly of Blackfire, are the members of the two-person group from Flagstaff.

Band manager and mother, Berta Benally, said the album’s release is aimed at bringing awareness to issues Native Americans face in northern Arizona. The new album is going to be released on Tacoho Records. Commemorating the Treaty of 1868 is also on the band’s schedule.

Next up on the band’s schedule are shows in Window Rock, Sedona, Phoenix and New York. “We are absolutely doing shows to commemorate the treaty signing with the Heard Museum and the Museum of Northern Arizona,” Berta said. Clayson said the soft release is a preview for their official new album release date on May 25. “We are so excited to share and play songs from this new project. We started recording in February 2017,” he said.

Clayson admits music has been a part of his life for more than 30 years and that it is healing.