While the rest of the Navajo kids in Kirtland, New Mexico, dreamed of basketball, Jordan Johnson chose soccer as her sport.

“It’s always the different thing that speaks to me,” she said. “I’ve always been like, ‘What else is out there? What else is going on?’” 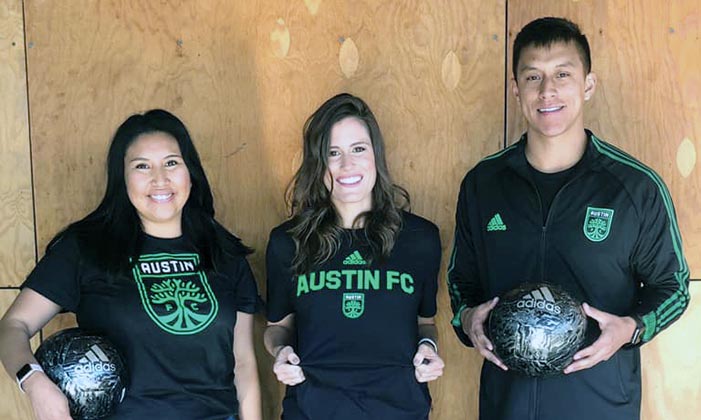 Something as seemingly inconsequential as her choice of a childhood sport proved fateful for Johnson, 25, who is Tábaahá born for ’Áshiihí. She’s now program director for a nonprofit in Austin, Texas, that uses soccer to build life skills for low-income youth, combining her athletic prowess with a master’s from Harvard University.

Named “Upper Ninety” after the sweet spot in a soccer goal where the kick is unstoppable, the program has caught the eye of Austin’s brand new professional Major League Soccer team, Austin FC. The team’s foundation, 4ATX, will take the three-year-old nonprofit under its wing, and Upper Ninety’s founder, Kaitlin Swarts, will become Austin FC’s vice president for community engagement.

The group will still have to fund-raise, but “it gives us the operational support we haven’t had,” Johnson explained. “Before, Kaitlin and I each wore about a thousand hats. We did our own accounting, our own HR, you’d see one of us filling the water cooler. Now we’ll have an accountant for real, a lawyer … it gives us more time and energy to serve kids, which is what we’re trained for.”

On Austin FC’s part, it gives the new franchise access to roots in the community Upper Ninety has already planted. “They’re setting all this groundwork, they’re building a new stadium in the middle of the city,” observed Johnson, “and it’s exciting to see the community rally around soccer and our kids. Because of this new partnership, we are now able to have a greater platform to do our work and build relationships with the power of soccer.”

Johnson and Swarts were classmates at Harvard, where they discovered a mutual passion for soccer and for “preventive practice,” which Johnson explained as creating strategies to keep kids from getting into trouble “instead of saying, ‘Oh, let me fix the situation after.’”

Upon graduating, Swarts discovered Johnson was thinking of moving to Austin, where Johnson’s fiancée lived. Austin happened to be Swarts’ hometown. “She said, ‘Hey, I’m starting this nonprofit,’” Johnson recalled. “’Would you like to be a part of it?’

“It was kind of scary because it was this brand new thing,” she said. “But on the other hand I had this opportunity just waiting for me.”

Swarts knew her program would have to do with soccer and helping kids, but “we had no sense of how we were going to do it,” Johnson recalled. “I helped build it from the ground up.”

Johnson was interested in the Navajo concept of nalyeeh, called “restorative justice” in academic circles. She incorporated that in the form of a “team circle” before each game where the kids can talk openly about issues affecting their lives and work through conflicts together.

“Maybe I’m not working with a Navajo population, but these are the pieces I’m bringing from my own family and my own culture,” she said. “I keep who I am at the forefront of what I do and how I do it. It’s great to bring that to Austin.” After the team circle, the kids play soccer with, according to the program’s website, “social-emotional lessons baked in.”

The sessions finish with a “Mindful Close” that gives participants tools such as guided breathing to practice self-calming and focus anywhere and any time they need it. Of the 350 kids the program has helped, 99 percent of them are students of color, most of them Latinx. They usually mistake Johnson for Hispanic.

“We have a whole conversation about Native Americans and where I come from,” Johnson said.

Even though she doesn’t share their culture, the kids seem at ease with her. “Skin color is still a very powerful thing,” she said. “For them to see a brown-skinned person here directing a program, I think it allows them to see themselves in that position.”

In fact, as the program has expanded, it has been able to offer jobs to six of its graduates, which in turn offers the chance to teach them interview skills, work ethic, and other things they can take with them into college or career.

“It’s challenging because they’re 18-year-olds who are still learning all aspects of the job, “Johnson said. “But on the other hand, it’s so rewarding, and we offer them this great opportunity to transition into whatever field they want to go into.”

And what does Johnson want for her future? After all, she’s only 25 and has her whole life ahead of her. “I know eventually I want to come back and work with my own people, either on the reservation or in Farmington,” she mused. “I’d like to take what I’ve learned in Upper Ninety and bring it home.”

Meanwhile, she’s looking forward to returning to Farmington in May for her traditional Navajo wedding … the start of yet another productive partnership.