It can be difficult to talk about and even harder to process, but in the past few years an insidious wave of sex trafficking has hit the Navajo Nation and Navajo Nation Council delegates want people to be aware so they can help protect potential victims. 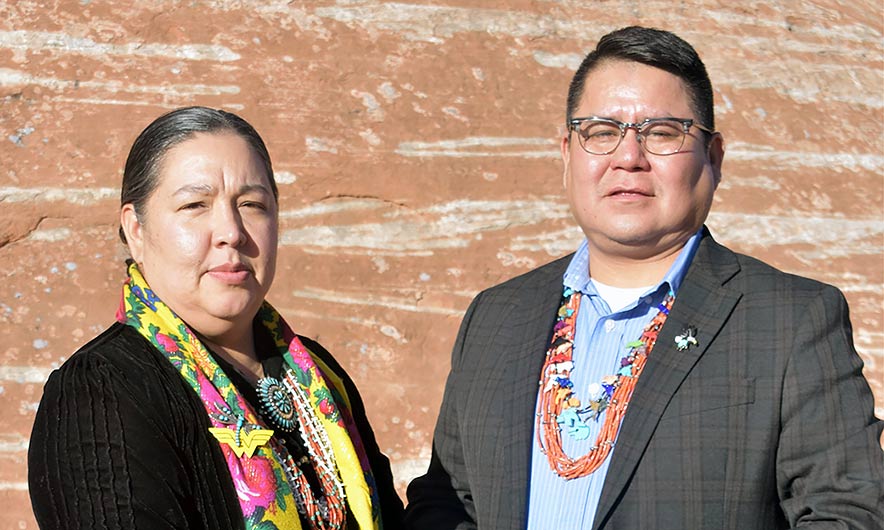 Delegates Amber Kanazbah Crotty and Nathanial Brown say raising awareness about the issue is crucial to mitigating the threat that has permeated Navajo’s highways, byways and border towns. “We have to let offenders know this is not a target area,” said Crotty, “that we are going to protect our children and our community members.” Sex trafficking is defined as the use of coercion, force or fraud to elicit commercial sex acts in exchange for something of value, whether that is money, or goods and services.

Three participants are involved in the sex trafficking transaction — the buyer, the seller, and the victim, who can be a man, woman or children. Furthermore, there is an intersection between sex trafficking and missing and murdered indigenous relatives, said Crotty.

Sex trafficking is prevalent at casinos, hotels, and highway truck stops or gas stations, where there are a lot of people coming and going, and the buying and selling of sex can occur largely undetected. Additionally, sex traffickers use online resources and social media to seek out vulnerable youth, said Brown. Facebook and Instagram are used to lure and trade victims, he said, and there are also apps that can be used to buy sex.

Crotty said it’s important to monitor your children’s online and phone activity. “Someone’s being groomed and someone’s being exploited,” Crotty said. “It’s not happening by accident.”

It’s also important to develop more support services for Native survivors of human trafficking on the Navajo Nation, say Crotty and Brown. “This is an emotional journey regarding not just human trafficking, but sexual assault prevention,” said Crotty. “This is how we got on this road – it was community members pleading with us that they were suffering in silence.”

Last week Crotty and Brown presented a white paper to the Naabik’iyati Committee that addresses “defining and preventing” sex trafficking on the Navajo Nation and elevates the issue to a public safety and public health crisis.

“This is a modern-day monster that we’re fighting,” said Brown. The report was prepared by the Navajo Nation Sexual Violence Prevention Working Group, the Sexual Assault Prevention Subcommittee and the American Indian Law Clinic at the University of Colorado Law School.

The paper states, “In order to create holistic and effective solutions to end this heinous act, communities and leaders must be aware of the dynamics that are creating a ‘breeding ground’ for sex trafficking on the Navajo Nation.” “I know this is a very tough report,” Crotty said to delegates.

“This issue hits home in the communities, the families,” said Delegate Daniel Tso. “We need to collaborate. Not one agency or entity can address this alone.” The paper proposes that the generational trauma that has contributed to high levels of poverty, substance abuse, and sexual and domestic violence on the reservation can make Navajo citizens, especially youth and children, more susceptible to exploitation.

“Violence touches every individual on the Navajo. It’s a terrible threat that always binds us all,” said Crotty. “What we’re looking to do is restore healing in the communities and encourage them to tell their stories.” Sex trafficking is especially prevalent in isolated rural areas with high unemployment.

Brown said it’s time to put K’é into action and look out for everyone in the community, to keep an eye on neighbors, and learn the warning signs. “Look at your own children, your nieces and nephews, your grandbabies,” said Brown. “Imagine if someone took them.”

Brown also encourages students to look out for one another at school. “They are the first line of defense,” he said. “They protect each other.” He said it’s important to tell your children you love them because a lot of time the traffickers make victims feel loved in order to manipulate them. Brown said Native women, children and LGBTQ citizens are among the most highly targeted by traffickers.

Crotty added that children and young teens between 8 and 14 are particularly sought after. “I know this is a very challenging task,” said Delegate Charlaine Tso. “You lose sleep over it. You hear stories of survivors who have escaped and attacks they have faced.”

While traffickers can come from off-reservation, they are often within the victim’s family or social circle, much as with sexual assault and abuse, said Crotty. Addiction to alcohol or drugs, in particular, can increase a victim’s vulnerability and potential dependency on a trafficker. Sometimes children are even trafficked by their own families to sustain the adult’s habits or to pay household bills.

“We have to tell that story, not to shame people, but to tell people if that happens to you, we have resources to help heal you,” Crotty said. The paper states that bootleggers, gangs, and sex trafficking rings also help fuel the sex trade on Navajo.

“Some of these issues go on day and night, but we never see or hear about them,” said Delegate Thomas Walker. “Our citizens are wandering around in despair. We feel their pain from a distance.”

A large problem with sex trafficking is that the bulk of it goes unreported for reasons such as shame, financial need, or fear of the trafficker. Overall, it is estimated that about half of cases of exploitation and missing and murdered women and children go unreported in Indian Country.

The paper points out, however, that the lack of data about trafficking on Navajo does not establish the absence of the crime itself. Additionally, some of the historical Navajo Nation sexual assault data is also now being linked to sex trafficking.

The paper states that in many cases, reports of missing Native women and children do not get timely federal law enforcement investigations. Crotty adds that Navajo still doesn’t have an accurate number of missing and murdered Diné relatives.

She said because so many people have been hurt by sexual assault and nobody has done anything about it for generations, many people don’t bother to speak up. Family members often shame victims and protect perpetrators too, said Brown. “A lot of perpetrators are getting away with behavior and victims get victimized all over again,” he said.

There is also a great deal of confusion over how, when and where to report instances of human trafficking, sexual assault and stalking on the Nation. “The thing that really gets to me is the runaround as to where to report this,” said Delegate Charlaine Tso. Tso says in her communities there is a great concern over lack of response from various reporting entities.

“If someone says they’re being followed, we need to consider that a life-or-death moment,” she said. Crotty said just three years ago, federal law enforcement partners said that there was no sex trafficking on the Navajo Nation, but that is turning around now. “We are working on strengthening our federal laws because it affects us at the Nation, county, state and federal level,” said Crotty.

‘You can’t unsee it’

In 2017, Brown and Crotty spearheaded the passage of the comprehensive Navajo Nation Law Against Human Trafficking that designates trafficking as a criminal offense and creates a pathway for coordination among government and civil institutions to address the issue, prevent trafficking and prosecute perpetrators.

Brown also sits on the Arizona Human Trafficking Council, where he works with a variety of victim advocates and law enforcement officials to track and prevent sex trafficking.

This includes sting operations that often reveal a wealth of information about the nature of the crimes and how young people are vulnerable to coercion. “You can’t unsee it and you can’t unhear it,” said Brown. “It’s a tremendous responsibility.” The paper recommends updating federal policies that often work against tribes when it comes to prosecution and jurisdiction issues, which predators are often aware of.

Also encompassed in these efforts would be an increase in the number of victim advocates. Delegate Eugenia Charles-Newton, chairwoman of the Law and Order Committee, said laws need to be strengthened.

She expressed concern over the lack of data that could help attract funding to address the issues. “When we go to Congress and we start advocating for monies, the first thing that they ask for is numbers,” said Charles-Newton.

Delegate Elmer Begay suggested that Navajo Police officers and investigators need to be trained on how to track down offenders and locate missing persons, and broadband internet coverage needs to be expanded to aid in those efforts. The paper states prevention and education are crucial, especially for children. Sharing traditional teachings like the Moth Way can help children understand healthy and unhealthy interactions among family members and kinship relationships, said Brown.

Brown concluded that it is the deep suffering of victims that keeps advocates like him and Crotty motivated along with an “army of allies out there fighting” on and off the reservation. “We have to go deep in the center of who we are, into the trauma that’s affected us and be brave and vulnerable enough to say ‘I want to tell my story, I want to heal, I want to live, and my life matters,’” he said.