‘I am from the Navajo Nation’: Raremetals youngster preparing for Miss Illinois Teen USA

She’s running for Miss Illinois Teen USA to mark the Native community in Chicago on the map and illuminate Indigenous issues across the country.

Nizhoni Ward, 17, is preparing for the official state preliminary competition at Illinois State University in Normal, Illinois, from May 28 to 30.

Ward is the eldest daughter of LeAnn Hascon Osby and the late James Ward. 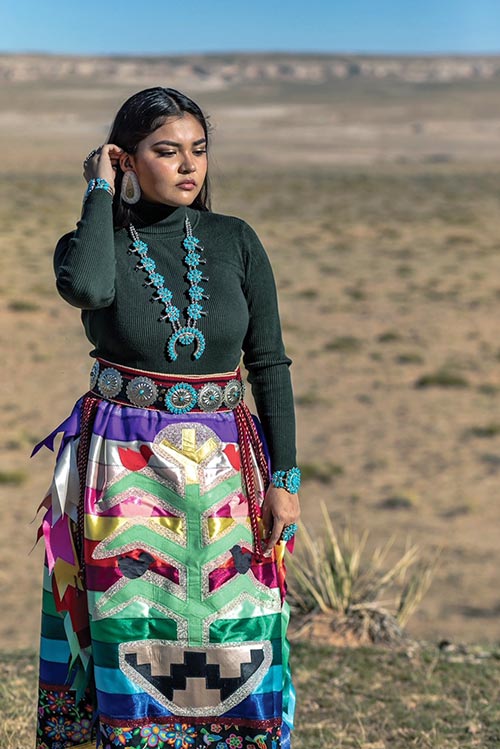 Courtesy photo | Gilbert Honanie
Nizhoni Ward, 17, from Raremetals, Ariz. is preparing for the Miss Illinois Teen USA Pageant from May 28 to 30. Ward is the current Miss Indian Chicago titleholder.

Each contestant will compete in three equal phases of preliminary competition: activewear/swimsuit, evening gown and interview.

The scores are added up and the contestants with the highest composite scores become semifinalists.

The contestants will be scored on their communication skills and personality.

Once the semifinalists are announced during a final interview, they will compete in activewear/swimsuit and evening gown phases, narrowing the field to a group of five finalists.

The top five will then each have an onstage interview conducted by the emcee, after which the judges will make the final rankings based on their overall impression of each contestant.

And the winner receives a prize package that includes cash, wardrobe, and travel.

“I don’t know about pageants like that,” said Osby, Nizhoni’s mother. “When we got into the pageant system, it was a whole new world.

“Even down to makeup,” she said. “You can’t have too dark or too light makeup. Judges have to see you.

“So, we have to YouTube a lot and get advice from people who do makeup,” she said. “It’s a lot of learning.”

For those not familiar with the pageant world, the Miss Illinois Teen USA is a beauty pageant.

For Nizhoni, it’s a way to celebrate her homeland – Diné Bikéyah – where she plans to return after achieving her goals and earning college degrees that would allow her to help Diné.

“I really want to show everybody that we’re still here,” Nizhoni said. “I am from the Navajo Nation, but I do live in an urban setting where I represent the Native American Center of Chicago and the Native communities out there.

“I also represent all the kids out here in the Navajo Nation and all the Indigenous kids all over the U.S.,” she added. “I want them (youth) to know they are in for so much. It’s not really for myself or for my platform.”

The stakes were high at the Western Navajo Fair Baby Contest in October 2005, when Nizhoni was 10 months old.

She won the competition. And it was fierce, said Osby, who was teaching Nizhoni Diné culture, tradition and language at the time.

She competed for the title again when she was 4 years old and placed first runner-up.

Nizhoni’s held many pageant titles over the years, including the American Indian Center of Chicago’s Junior Miss Indian Chicago, 2013-14/2016-21, Miss Teen Globe United States 2020-21 and Miss Indian Chicago 2021-22, among others.

“I ran for Miss Teen Globe Illinois United States in 2019,” Nizhoni said. “I ended up getting third runner-up because of a dress. It wasn’t an evening gown. Maybe because it wasn’t sparkly enough.

“I thought I messed up an interview,” she said. “But the judges said, ‘No, you did fine. It was the finale dress.

“That’s when I realized they heavily judge what I wear,” she said. “I had the highest points in my interview, but I still lost. It was really different.”

“We didn’t know,” Osby said. “The pageant was an eye-opener for us.

“We started researching the difference between an evening gown, dresses, and cocktail,” she added. “We had to figure out what was going on. We had to call the pageant director and ask them to give us some samples.”

In the world of beauty pageants, there is no such thing as a no-makeup look, said Osby, who travels with Nizhoni to competitions.

And glamour is the go-to for the young women who compete for the crown.

Nizhoni’s presence onstage may seem effortless and sometimes intimidating for the younger girls, but it’s hard work to get to the top because it can get pricey.

Everything must be perfect, from her glow-up to a movie-star look down to her beauty regime, because even the slightest cosmetic error – or dress error – can result in points lost, said Osby.

“We’re still learning today,” Osby said. “When Nizhoni has a competition, we say, ‘Make sure it’s right.’ Even down to walking. You can’t bounce too much – it’s so amazing!”

Nizhoni said even the competition background music all sounds similar.

“Dresses are $500-plus,” Osby explained. “She could do her own hair and makeup or pay someone to do it, which is about $400. We take all of these things into consideration, and if we get a sponsor, it makes things way easier.”

Nizhoni is working with some Indigenous designers, artists, and entrepreneurs, such as her mother’s LeAnn Osby Designs, Gilbert Honanie Photography from Tuba City, and Ahsaki Báá LaFrance-Chachere, founder and owner of Ah-Shí Beauty.

Osby said many of Nizhoni’s sponsors are Native, like Sara Honanie Images and Crystal L. Dághaa’ii.

While Nizhoni isn’t worrying about makeup that’s unapologetically labor-intensive, she’s beading and studying for the nursing program at the University of Arizona in Tucson, where she’s moving in August.

“But I also want to do pre-med,” Nizhoni said. “I want to go into the medical field to become a traveling nurse or a traveling pediatrician in the Navajo Nation. I want to minor in American Indian studies – just to have that.”

Because she isn’t fluent in the Navajo language, she said she’ll take classes to speak with the elders when she returns home to Western Navajo to work.

Nizhoni finished high school a year early and had been preparing for college at home alongside running her project, “Nizhoni Hózhǫ Project,” and running her small business: Nizhoni Hozho Co.

Nizhoni started the Nizhoni Hózhǫ Project at 13 to give back to Native youth. She makes ribbon skirts for Native residential students, masks and beaded earrings. All profits go toward her project.

During the first and second years of the coronavirus pandemic, Nizhoni made cloth face masks for hundreds of people in need. She said her love of sewing comes from her mother and grandmother, who make clothes and traditional outfits.

“The support from my family is what really helps,” Nizhoni said, adding that when she competes in pageants, her family fills a section to cheer for her.

Some of the Diné who reside in the Windy City are from New Mexico, said Osby.

Nizhoni, her 13-year-old sister Lilliana, and their three younger sisters represent the Diné the best way they can, said Osby.

And Nizhoni is taking the non-Native and Native pageant world by storm and providing much-needed representation for Indigenous people.

“They look at us like we live in teepees,” Nizhoni said of the non-Natives who often approach her as she wears traditional outfits.

“They make gestures and take so much pride in the Native American mascots because they think that it’s something that reflects good back on us Natives,” she said.

Nizhoni said she often tries to explain and share with non-Natives the Indigenous culture, languages and dancing.

“But sometimes it does get tiring when it’s someone who’s constantly asking, and you have to keep explaining it,” she said. “At first, it really affected me, and I do my best to say it nicely.

“I show them who I am with my dancing,” she added. “And I explain to them the Navajo basket. I speak my language out there, and I introduce myself. I talk about my mom and sisters, my grandmothers and everything – I show everybody what I’m doing and what I’m creating.”

Nizhoni said she thinks about running for the coveted Miss Navajo Nation crown. If she is going to compete soon, she’ll immediately move home to Raremetals to sit with her elders to learn how to be a Miss Navajo Nation.

“I want to make sure that I’m ready and have my grandma’s permission to run,” Nizhoni said. “I’d represent my family and show people that my family takes pride in me, and I take pride in them and my culture, the stories, and the history of my family.