On April 29, Delegate Eugenia Charles-Newton announced on Facebook that she will be running for Shiprock/Nataani Nez Council delegate again and, if elected, will throw her “hat into the ring” as a candidate for speaker of the Navajo Nation Council.

If selected, Charles-Newton would be the first female to lead the Council in this capacity. 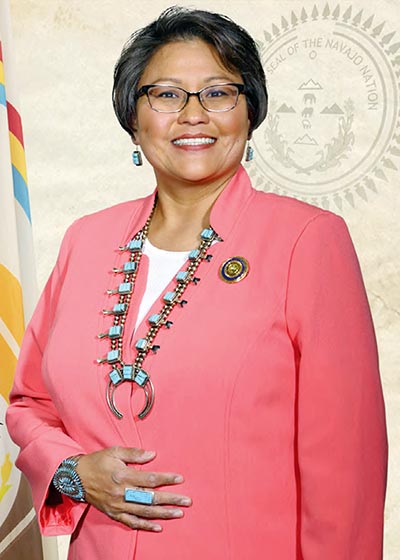 The speaker serves at the pleasure of the Council and is chosen by delegates and confirmed for a two-year term. This is the first order of business on the fourth Monday of January during the winter session.

Charles-Newton, who is chair of the Law and Order Committee, is one of the few delegates who regularly shares live updates on Facebook – even what is going on behind the scenes.

In an interview with the Navajo Times on Sunday, Charles-Newton said public communication and educating people about what the legislative branch has been doing has been critical, especially during the times of COVID-19.

“I truly believe in transparency,” said Charles-Newton. “Our Navajo people – this is their money and the decisions that we make each day at Council affects them.”

Through her extensive community outreach efforts, she has also worked hard to bring in the needs of the people directly into Council forums.

One example of this has been Charles-Newton’s work to give Hardship Assistance payments to the Navajo people, which she said was the toughest political battle she’s had to fight because many leaders were not for it and criticized her for pushing it.

“I know right now everyone is trying to take credit for it, but I can say I fought hard for the Hardship,” she said.

Without her unwavering advocacy along with that of delegates Vince James and Amber Kanazbah Crotty, the Hardship Assistance legislation might not have passed, at least not at the higher dollar amounts they finally did.

“We won,” said Charles-Newton. “We were able to get the Hardship out to the Navajo people, which should have been the first thing that was done when the money was received.”

Charles-Newton says she was also very active helping to provide COVID-19 relief during the worst of the pandemic.

“I was in my community 100 percent,” she said. “I was out there delivering food, wood, helping the people as much as I could.”

As a delegate, she has also worked to bring road improvements and expansions, clean-up for abandoned structures, and has been a strong advocate for public safety, including pressing forward with law enforcement infrastructure projects.

“I would like to sponsor more legislations for the Navajo people,” she said. “Legislations that will better the way that we live and most importantly put the people back into government.”

The speaker is paid a salary of $30,000 and is offered housing in Window Rock.

The speaker’s duties include managing the legislative branch, presiding over the Naabik’iyati Committee and Council, appointing a speaker pro tem, assigning delegates to standing committees, voting in the event of a tie, calling special sessions, recommending the annual operating budget, and issuing certificates of recognition and memorials.

Charles-Newton says as the head of the governing body of the Navajo Nation, she would continue to forge better government communication, education and transparency.

“As speaker, I think it’s going to be really important to continue that communication to let the people know what’s happening at Council, to let them know what legislations are being passed,” she said. “And, most importantly, keep them informed about how their money is being spent.”

She plans to hold regular press conferences and make the most of online resources and social media to share information and to reach youth.

“We are no longer just citizens of our communities or the Navajo Nation, we are global citizens of the world,” she said.

“We also have Navajo people throughout the world and we need to be able to communicate with all of our people to keep them informed about what’s going on,” she said.

She said when she was in academia, it was her job to know what the most updated platforms and teaching tools were and to make use of them to the fullest extent.

“We need to bring Council into this next generation of technology,” she said. “There’s always some way people are connecting to social media, so we should be using that to our advantage.”

She wants to start a Council YouTube channel where delegates can be interviewed about legislation, why they’re sponsoring it and how it affects constituents.

“I want to be able to take Council to that next level and really open up those doors of communication and show our Navajo people, this is your government in action,” she said. “And to ask them that question, are we ready for reform, do we want reform?”

She plans to improve the legislative branch website to be more user friendly and informative.

“I would like to see every delegate having their own webpage on the website outlining what projects they have at the community level,” she said.

Charles-Newton said, as speaker, she will expect her staff to be responsive to public information inquiries, improve customer service, and perform their duties with a high level of integrity and professionalism.

The speaker has the authority to appoint a new chief of staff and other key positions.

Charles-Newton said she will work to fill vacancies, such as the Office of the Auditor General, which is currently short-staffed and being led by a delegated auditor general.

“We have to remember this is not an ordinary year,” she said. “We’re not just using general funds. We’re auditing funds that have been given to us by the federal government. These funds need to be accounted for because the Navajo people need to know.”

Charles-Newton says she will also work to update the Navajo Nation Code, last printed in 2005, which means it has not been updated to include all of the amendments that have been passed since then.

“It is so important that our Navajo people know the current law,” she said.

She said even as a delegate and former law librarian, she sometimes wonders whether she is looking at the most current version of the law.

“When we’re talking about updating and using technology to our advantage, we should be able to not only provide in print the most updated laws, but we should be updating the Navajo Nation Code webpage,” she said.

This is the responsibility of the speaker, she said, which has been neglected.

‘Raised on the land’

Humble beginnings notwithstanding, Charles-Newton said she is the mostly highly-educated delegate serving on the Council.

She and was admitted into the Navajo Nation Bar Association in 2017.

In her professional career, she has worked as a prosecutor, a law librarian and a professor and has published many of her scholarly papers.

She originally comes from a family of 12 children and has five sisters and six brothers.

“We grew up in Shiprock with no electricity and no water,” said Charles-Newton. “We were raised on the land. My dad always made it very clear to us that we need to learn to live that way.”

She said their entertainment as kids came from their animals and taking care of the ranch, and a very special donkey named Apple, with which they grew up.

“We would ride Apple to the store and around the neighborhood,” she said.

Charles-Newton now lives and maintains a farm in Shiprock with her husband, Leroy Newton.

To this day, she still keeps a special rescue donkey – Brandy – in the family.

“Brandy represents a piece of my childhood and continuing that teaching,” she said.