‘I represent everybody’: Diné to lead Winslow as first Native American mayor

The city of Winslow made history on Nov. 3 by electing Roberta “Birdie” Wilcox Cano to be the first Native American mayor of the iconic Route 66 hub. 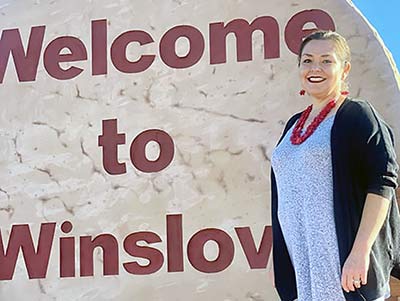 Courtesy photo
Roberta “Birdie” Wilcox Cano, Diné/Pueblo and Scottish, is the first Native American to be elected mayor of Winslow.

Born and raised in Winslow, mayor-elect Wilcox Cano speaks of her idyllic childhood when the “whole town” used to come together for community and cultural events, and everyone embraced diversity with a spirit of inclusion and mutual respect.

“Everybody was included, and everybody was the same,” she said. “I want to be back to that. I want everyone to feel like every part of this town is important and here’s why I know – I’m a part of everything. I represent everybody.”

Wilcox Cano, daughter of a Navajo/Pueblo railroader and a Mormon teacher of Scottish ancestry, says she is uniquely positioned to take the helm as mayor.

“That’s my biggest asset – I have experienced every aspect of this town,” she said. “I’m a hometown girl.”

After graduating from high school in 1993 as a “proud Winslow Bulldog,” Wilcox Cano left Winslow to work for the Arizona Department of Corrections in Yuma.

Twelve years later, she decided it was time to return home.

“I came back with all of the hope in the world to raise my children in my hometown and give them the experience I had growing up,” she said.

In 2013, Wilcox Cano began working for the city of Winslow as an entry level secretary and moved up through the ranks to become the City Hall administrative assistant, where she worked with a variety of boards, councils and commissions.

“As an employee of the city, I got to see the inner workings of everything and I just could see how we can do better,” she said. “I started stepping into more of a leadership role, even as recording secretary, to start planning and executing bigger projects.”

In demonstrating her “can-do” attitude and skills, she was promoted to community services coordinator in 2017 where she served as the city’s liaison for planning and organizing events.

“I kind of took the reins on it,” she said. “I had a very good network of people that I could rely on for these types of things.”

As mayor, Wilcox Cano believes she can use her experience to make the city more business friendly. She’s seen Winslow miss opportunities that could have helped grow the local economy.

“Some of our ordinances are kind of antiquated and there’s definitely room for change, which could open a lot more doors for people,” she said. “We’re on I-40, we have the railroad and all these great amenities, and it shocked me why we could never actually move forward.

“You would think businesses would be knocking down our doors to develop along the exits of I-40,” she said, “but it never really happened.”

She believes Winslow has everything in place to be a thriving, economically sound community that can attract new industries.

“Not that we want to be a giant city, but just to bring in some more revenue and taxes so we can improve our parks, have higher wages for our employees and things like that,” she said. “We just need the one thing to push that wheel to go.”

Additional housing also is a priority to attract new business and workers, she added.

“If we were to have a big, new housing development, that would help to bring people here,” she said.

Wilcox Cano says she will also continue to focus on bringing the community together.

“We used to have so many community-oriented annual events that everybody went to,” she said. “There was always something going on. While some of those things are still happening, they’re not as communal as they used to be.”

To repair some of the fragmentation that has occurred in Winslow, Wilcox Cano wants to promote unity and combining resources to build the community back up.

“I think there’s just a ‘This is how we’ve been’ kind of apathy and attitude,” she said. “People are maybe afraid to try new things or bring newcomers in. I think if we can come together on a unified front on some of these issues, we would be unstoppable.”

With her experience as a community organizer, she said she will lead by example as mayor.

“It’s a lofty aspiration, but I feel it can be done,” she said. “There’s an energy here untapped that is just phenomenal and the people that come from here can do anything. It’s just so open for new opportunities. I am super-excited, and I have faith in all of it.”

However, until now, white males had led Winslow.

“I could not believe that in the history of Winslow, right in the middle of Navajo Country, and with our neighbors the Hopis, that our community has never had a Native American mayor,” she said.

“We were very underrepresented in the history of Winslow,” she said. “There was a disconnect between who was running for office and who’s actually in our city. I think a lot of people didn’t want to engage because they thought ‘this person doesn’t know my life, our community, our people.’”

She hopes that with her being elected mayor, more people are opening their eyes to possibilities of serving in city leadership.

“We need it to look like our actual demographic,” she said.

Wilcox Cano acknowledges that being part bilagáana and part Navajo, she “has felt the tension” in Winslow at times in facing some of the complex issues that are common to border towns.

As a former corrections officer, Wilcox Cano says she can also appreciate “all sides” that can emerge in public safety issues.

She intends to reach out to leaders, including on the Navajo Nation and Hopi Tribe, to try to combine efforts to attack systemic problems, including addiction and homelessness, that overlap communities, as well as equity in law enforcement.

“One thing that I am happy for is that I have a very good relationship with the Winslow PD,” she said. “The way things are changing with policing in America, I know for a fact that there is the potential for a very serious, sobering, open dialogue to how we move forward.”

Winslow made national headlines in 2016 when a white police officer shot a 27-year-old Navajo woman, Loreal Tsingine, to death after she charged him with a small pair of surgical forceps.

Wilcox Cano said Winslow has been developing new training at the police department to encourage officers to step back from charged situations before reacting.

“That is a national thing that most agencies are doing,” she said. “That’s something I want to convey to our police department, that aside from life or death situations, to take a step back and really assess what’s going on and give it more time to make a better decision.”

Wilcox Cano says her own experience working in the corrections system was invaluable to being in a position of leadership.

“Working for the prison, you have to be very tough,” she said. “You have to learn how to diffuse any situation. I feel like I could walk into any circumstance and know what to do.”

Despite the COVID-19 pandemic, Wilcox is optimistic about the future.

“Now that we’re in a position where we understand ways to protect ourselves and others, I feel like there are opportunities to provide services and move forward with a lot of ideas but do it in a safe manner,” she said.

“We are in the ‘second wave’ and we just have to be more vigilant,” she said. “I feel very confident that we will very soon have an opportunity to come together and get back to the norm.”
Wilcox Cano will be sworn in as mayor at the next Winslow City Council meeting on Dec. 8.

The Winslow mayor position is somewhat unusual in that the job pays only $400 a month, along with providing medical coverage, but regardless Wilcox Cano says she plans to devote herself fully to the job.

“It’s not about the money or the glory,” she said. “It’s honestly from the heart about this community and how we can do better.

“If we wait on other people to do the things we’re capable of,” she said. “It’s just going to lead to being frustrated and disheartened by things, so someone just has to take charge and do it.”