Through his work at the NASA Jet Propulsion Laboratory in Pasadena, California, mechanical engineer Aaron Yazzie is now part of the mission to identify signs of ancient life on Mars. 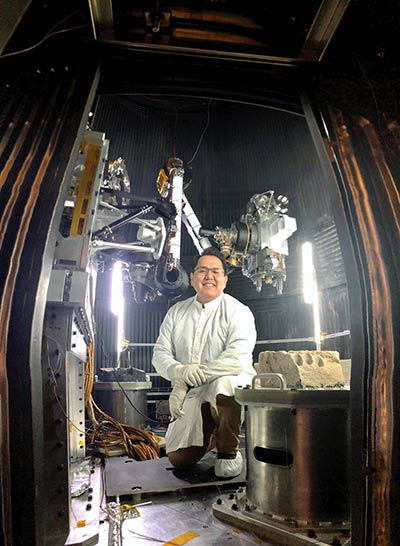 When asked what it feels like to be so closely connected to a planet 65 million miles away, Yazzie says because he’s been studying the planet so closely, in some ways, Mars feels like it’s “right next door.”

“It kind of makes our solar system seem kind of small, more attainable, more reachable, but at the same time, the universe is so big, and we are just a tiny spec in that,” he said.

Although Mars and earth took different paths in their evolution, they are fundamentally the same type of planet, having a core, a mantle, and a crust.

“They are shaped by volcanic activity, earthquakes and ‘marsquakes,’ and by wind and water,” he said.

“I always say that it reminds me of the Navajo Nation,” he said. “That’s because it’s a rocky, terrestrial planet that developed in the same way that earth did over billions of years.”

He also suggests that Mars also offers a different perspective on earth.

“You turn around and look at Earth and see all of the life we have here, the plants, the animals, the insects, the humans,” he said. “It makes me feel so awestruck at life on earth and how we are here existing.”

Yazzie believes it’s essential to recognize and appreciate just how unique the earth is.

He said that having such a “beautiful balance of water and land” and creating all the nutrients needed to live and thrive makes earth distinctly unique in the solar system and the entire universe.

Born in Tuba City, Yazzie, 36, was raised in Holbrook by his mother, Shirley Yazzie, a math teacher from Shadow Mountain, Arizona, and his father, Kee Yazzie, a civil engineer from Black Mesa.

“Both my parents are the first in their families to venture out and go on a path of higher education and getting a degree,” Yazzie said. “They kind of conditioned us to know that we were going to go to college.”

Yazzie says he was also self-motivated to get the most out of his education and took advantage of extracurricular opportunities, including the gifted student program.

“I also did sports,” he said. “I was on the soccer team and the track team.”

Yazzie also always had a curiosity about “how things work.”

“Whether it was doing craft projects, the kind of things your science teacher would tell you to do in school, but I would just do it on my own,” he said. “I thought it was fun.”

Overall, he says he had a great early school experience.

“My parents set up an environment where education was important and allowed us to understand that ‘sky’s the limit’ and you can achieve whatever you want,” he said.

However, his mom always said if one wants something for the future, they would have to make it happen, said Yazzie.

“I would seek out summer programs on my own and apply to them,” Yazzie said. “When it came to looking at colleges, he reached out to admission counselors to get help with applications and scholarships.”

After high school, he went on to earn a bachelor’s in mechanical engineering from Stanford University in 2008.

“I definitely did not breeze through it,” he said. “Not only is engineering a hard discipline, but at the time I applied at Stanford, it was one of the top 30 engineering schools in the nation.”

Yazzie says many people today ask him if he always dreamed of being an astronaut or working at NASA.

“That dream never came to me – it didn’t even occur to me that that was an option for a kid like me, growing up in Holbrook,” he said.

His first introduction to NASA was after his junior year of high school when he was accepted into the NASA Summer High School Apprenticeship Research Program.

“They basically allowed students to explore the field of engineering that they were most interested in,” he said.

He went to the University of Michigan, where he worked with a mechanical engineering grad student helping him design parts for an experiment.

“I really liked it – it kind of combined the technical, math, and science part of my brain with being creative and using my hands,” Yazzie said. “It seemed like a very cool, creative project that was both artistic and technical at the same.”

When he returned to Holbrook, people started calling him the “NASA boy,” he said.

“Just the association with NASA was the first time I got the idea that maybe I could do something like that, and it just continued to grow from there,” he said.

The summer after his first year in college, he applied to the American Indian Science and Engineering Society internship program. He went to work on a project at the NASA Goddard Space Flight Center in Greenbelt, Maryland.

The following summer, he worked as an intern at the NASA Glenn Research Center in Columbus, Ohio.

“Over time, these experiences helped increase my confidence in myself and made me understand what my capabilities actually were,” Yazzie said.

Yazzie applied to the NASA Jet Propulsion Laboratory, where the focus was robotics, space exploration, and research regarding finding a place to work after college.

“They flew me down from school, and I was interviewed for a day with like five different managers,” he said.

Shortly after he left, he got a call that he had been hired.

“It was amazing; I was doing a happy dance in the airport,” he said.

Looking for signs of life

Since then, in his 13-year career at NASA, Yazzie has worked on several Mars Rover projects at the Jet Propulsion Laboratory.

“Back when the Curiosity Rover was being built was when I started working at the JPL,” he said.

He was put on the team that did testing on the rover to assess its capabilities.

Then he joined the rover “Downlink” surface operations team.

“While the rover is on Mars, it sleeps at nighttime, just like humans do,” Yazzie said. “It receives a set of commands from earth, and it will execute those plans during the day. It sends back to earth the information about what it did that day.”

Then the Downlink team analyzes the data, he said.

Yazzie also got to work on the InSight Lander, which landed on Mars in 2018, that is stationary.

“Its main purpose is to study the deep interior of Mars to figure out what’s going on underneath the surface, how hot the core is, and what kind of activity is going on to see how Mars evolved into what it is today,” he said.

That mission was the first time Yazzie was able to build a part called a pressure inlet probe.

“It’s a little probe that sits on top of the Lander and allows us to get a fairly accurate reading of Mars’ atmospheric pressure,” he said.

Most recently, Yazzie has worked on the Perseverance Rover that landed on Mars in February of 2021 in a crater that he and his team believe was once a giant lake filled with water.

“We know that where water once existed, there’s a potential for life to start to develop,” he said. “So, we’re driving (the rover) around in this giant, ancient lakebed trying to find rock that existed there during that time.”

When they do, they drill into the rocks and extract samples. Yazzie was the lead engineer for the drill bits used in the process.

“When you look at Mars now, it’s just become a big desert landscape, so life didn’t thrive there, so right now we’re looking for evidence of past life,” he said. “We’re hoping that these rock core samples will hold ancient fossils of microbial life.”

The goal is to bring the samples back to earth so that they can study them with high-powered instruments.

Yazzie is responsible for ensuring the sample tubes successfully go through all the steps they need to go through to be delivered back to Earth in 2033.

“Even though that seems like a long time from now, for a space project, that’s short,” he said.

He said meeting up there with other STEM professionals and scholars is like a yearly reunion.

“AISES has just been a huge part of my life,” Yazzie said. “They’ve been with me in every major step in my education and my career.”

“They gave me a four-year scholarship when I went to college, I got my two NASA internships through them, and I met the recruiter for NASA JPL at the AISES National Conference Career Fair,” he said.

This year, Yazzie participated in a panel called “Natives at NASA,” where they discussed “weaving culture into STEM stories.”

Now Yazzie also helps NASA try to recruit Native Americans to increase the representation of Natives in the workplace.

Yazzie said from the time he left Holbrook for Stanford, he’s often been the “only Native American in the room,” whether in a class, an internship, or in meetings at his job.

“It can be lonely without other people from the community with you,” he said. “When I go to the AISES conference, there are thousands of Native Americans who are in the STEM field, who understand my experience. It’s a beautiful support network.”

One step at a time

Yazzie advises young students not to be discouraged if they don’t see somebody that looks like them in the field they want to pursue.

“Don’t think that if you want to work at NASA or you want to be an astronaut that it’s too big of a dream for you,” he said.

“Be self-motivated,” he recommends. “You shouldn’t have to have somebody tell you what to do. You should want it so much for yourself that you’re doing it on your own.”

Yazzie said, in retrospect, he spent a lot of time worrying about what career path he should take when that was unnecessary.

“I just needed to take it a step at a time, take advantage of the opportunities around me,” he said. “I really love my job at NASA JPL and could easily see myself staying there long term. I’ve found myself in a really good place.”