Nez and Nygren debate at NTU 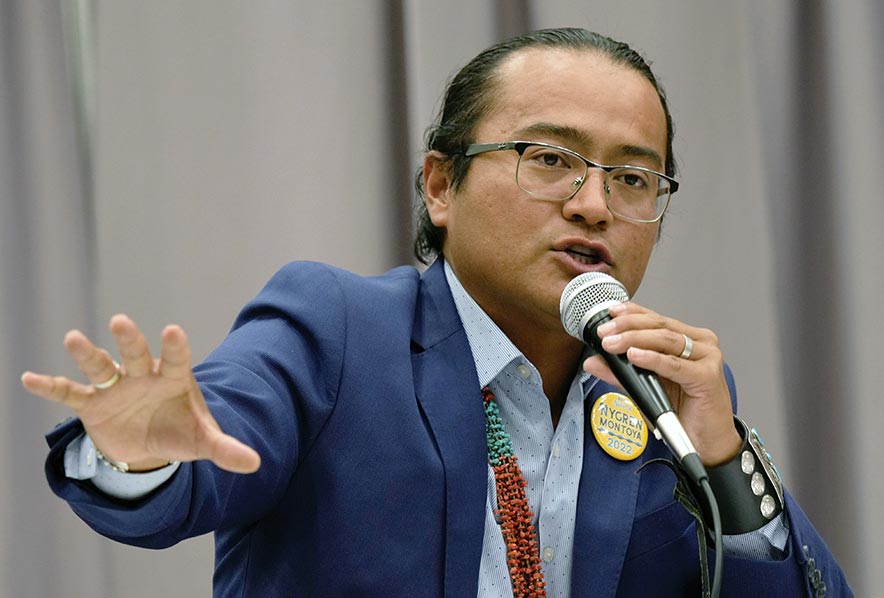 In what could be one of the last Navajo Nation Presidential forums to be held before the Nov. 8 general elections, Jonathan Nez and Buu Nygren faced one another on Tuesday at the Navajo Technical University.

Nez opened the debate with a five-minute speech on his administration’s efforts and poked at Nygren’s lack of experience and naivety.

“You can’t just come in at the eleventh hour and grab the reins on the horse and try to get that horse to beat the world record,” said Nez.

Nez suggested being a leader in his capacity was not a sprint. 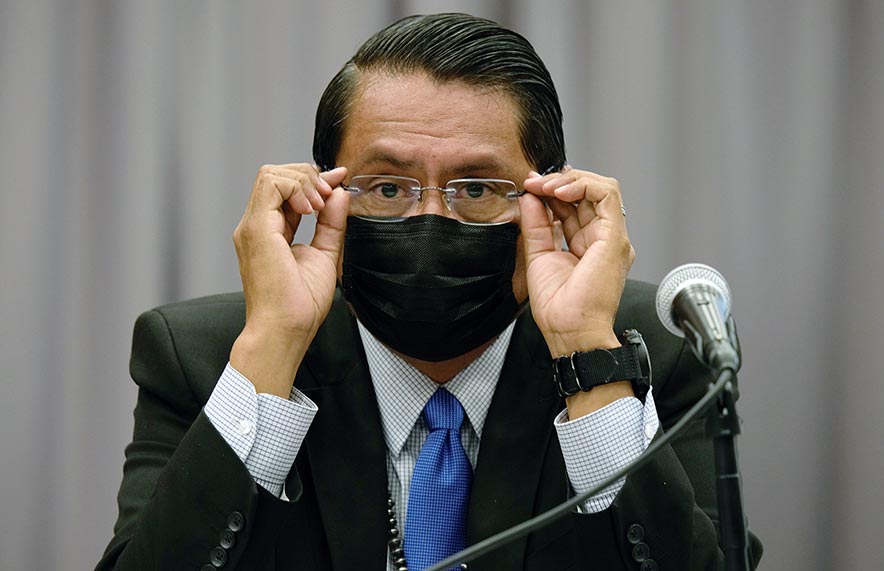 “It’s the endurance, it’s the long haul in what we’re trying to do here for the Navajo people,” he said.

Nygren quickly turned his attention to his opponent and said that 24 years – eight of it at the executive level – in tribal politics was enough.

“I think that’s enough. Thank you, but it’s time for new leadership that is more than prepared, that is bringing real-world experience,” Nygren said to Nez and the audience mostly made up of supporters of both campaigns.

While the pair jabbed at each other’s approach to how they’d run the presidential office, the two candidates kept the responses within the allotted 2-minute time frames.

The moderators, Kyle Frank and Delores Becenti, asked their questions in English or Navajo. The challenger mainly responded in Navajo, and his answers were quick and decisive.

Nez, on the other hand, mixed his responses in both languages. He spoke slowly and gestured with his hands to help emphasize his answers.

But Nygren pressed forward and told the forum and the university’s live-stream online audience that as a Navajo citizen, he too was tired of the well-polished politics that seems to have frozen progress for the Navajo Nation and its people.

The candidates were asked to share their thoughts on the tribal government’s similar structure to the federal government’s three-branch system, which appeared to limit the Navajo people.

Nez said the Navajo people have their own belief that was used to move the tribe forward. He then turned his attention to COVID-19, and his administration traveled throughout the Navajo Nation, helping communities in all 110 chapters with food and masks.

“I didn’t see presidential candidates running around out there. I only saw my administration out there. That’s leadership,” he said. “It’s quite interesting when people say there’s nothing been done in our communities.”

It was Nygren’s turn to respond.

“I, too, was also out there visiting our people living in some of the most rural areas living with no running water. I was out there too helping our people,” said Nygren.

The challenger added that during the height of the pandemic, when donated foods were being distributed, many of the foods spoiled, suggesting that the Nez administration was not quick enough to give them out.

The response caused Nez to raise his rebuttal sign, which both candidates could raise if they wanted to dispute what the other was saying.

Nez said he’d take offense to people saying his administration did not do anything during the height of the pandemic.

“Especially to the Navajo employees who risked their lives on a daily basis to help our Navajo people out,” the incumbent said of the frontline workers.

Since the pandemic arrived in March 2020, more than 1,920 Navajo people have lost their fight against Covid, according to the Navajo Department of Health data on COVID-19.

Not everyone is running for the presidential office, and it’s just us two. If you elect me, I’ll fight for you,” Nygren rebutted.

Nygren then responded to Nez, who said Navajo Nation employees should be offended by the suggestion they didn’t do anything to help.

“For those Navajo Nation employees and frontline tribal workers who told me they weren’t getting paid for risking their lives, for our Navajo citizens who were displaced by the pandemic and told me they’ve tried and tried asking for Nez’s help – those are the people I am talking about,” Nygren said to his opponent.

The pair were asked how they’d streamline the relationship with the Council to which Nez claimed 21 of the 24-body Council have come to him.

“We have an open-door policy for the legislative branch,” he chimed about the importance of continuity.

“I won’t wait for people to come to me; I’ll be at your doorstep,” said Nygren. 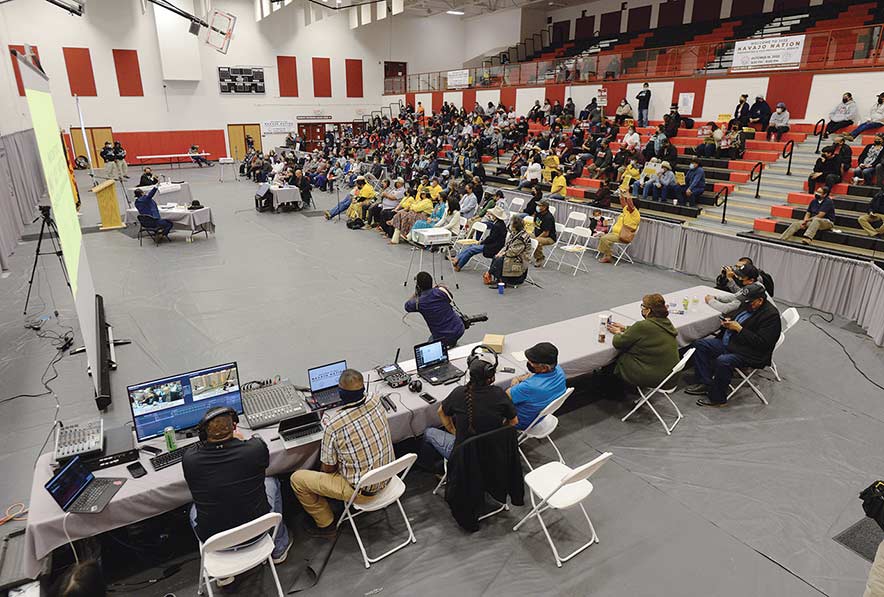 Navajo Times | Donovan Quintero
A crowd of Buu Nygren and Jonathan Nez supporters listen to their candidates’ debate on issues affecting the reservation on Tuesday in Crownpoint.

For over an hour, the two candidates gave their answers, often commenting on the other’s plans and ideas and how it was not working or would not work.

The pair were asked how they’d protect tribal sovereignty since the U.S. Supreme Court ruled in the Oklahoma v. Castro-Huerta case that states could prosecute non-Natives who commit crimes against Natives within a tribe’s boundaries.

The moderators said before the Supreme Court’s ruling, tribal and federal courts were empowered to handle such cases.

Nygren was asked to respond first to share his knowledge and what he’d do to address this issue.

The contender said in Navajo that the tribe should continue prosecuting their cases, especially when it came to prosecuting non-Natives committing crimes against Navajo people.

Nygren did not say much more beyond that, other than that the prosecution of criminals should stay with the tribe.

Nez seemed to fair no better as he struggled to highlight which case the moderators were referring to. The incumbent corrected himself more than once while responding to a question on how he would protect tribal sovereignty.

In the Oklahoma v. Castro-Huerta case, Victor Manuel Castro-Huerta, a non-Native person, was prosecuted for abusing a Native child on the Cherokee reservation. He was convicted in state court and sentenced to 35 years in state prison.

Castro-Huerta appealed and argued the state lacked jurisdiction because the crime happened within the Cherokee Nation boundaries.

The Castro-Huerta case is based on another ruling that occurred in Oklahoma, McGirt v. Oklahoma, in which the case affirmed that the eastern half of Oklahoma belonged to the Native people in Oklahoma.

The Court ruled Oklahoma had jurisdiction over crimes committed by non-Natives who commit crimes against Natives in Indian Country.

Prior to the Castro-Huerta decision, the federal government had jurisdiction for major crimes committed by non-Natives under the Major Crimes Act. With the SCOTUS verdict, states could get involved now.

The veteran politician used an example that if a visitor to another country commits a crime against that country’s citizen, the country has a right to prosecute the visiting offender.

“If you go to another country and you break the law in another country, you’re held to that law. You should be held to the same standards, the same law here on the Navajo Nation, no matter what race you are, because we have a competent court. We have our chief justice. We have our Supreme Court that has been fair on many of these cases.”

Another tough question was asked of the pair on uranium contamination.

Nez said the first thing that needed to be done was reauthorize the Radiation Exposure Compensation Act or RECA,

Nez suggested compensation should be increased for RECA since uranium mine workers “defended this country” too.

“Navajo people contributed great things to the freedom of this country and push democracy all over the world,” he said.

Nez said the Navajo-Gallup Water Project was asked why it was being constructed. He responded that the Navajo people could get safe drinking water because the aquifers were “damaged” from uranium.

“That is more safe, at times than what we pumped out,” he said just as the two-minute buzzer cut him off.

Nygren responded and said there’s always been money allotted for it.

“Now, we see those funds have been dwindling and prices increasing,” he said. “If you elect me, we will start working on it right away.”

Melvin and Frances Tony, who said they’ve been married since 1970, felt the debate was “all right.” Frances said at the end of the discussion of the choice of words the presidential candidates used towards each other weren’t necessary.

“At the end, it started kind of getting rowdy. They should both take it easy,” said Frances, who added she and her husband needed to get home since it had gotten late for the two.

Agnes Barney said she voted for Nez and Myron Lizer four years ago and would not be voting for Nez and his running mate, vice presidential candidate Chad Abeyta.

“I’m pretty sure how I want to vote,” Barney said, who said is from Tohatchi. “I was always ask this question: why does anybody want to be a president?”

Barney said a sitting president is not in control. It was the Council.

“The tribal Council that drives the government and the president is there to support all the decision-making that are being made,” she said after the debate.

She said that went away.

“I don’t see that with our current president, President Nez. They keep saying they want change, but once they get elected, they get behind closed doors, you’ll never hear them from again,” Barney said.

“Where is he? Once he got into office, we never heard from him again. That’s frustrating,” she said.

Early voting has begun, and Nov. 8 is less than two weeks away. Another presidential – maybe the last – is scheduled to be held at the Sandra Day O’Connor College of Law in Phoenix at 10 a.m. local time.