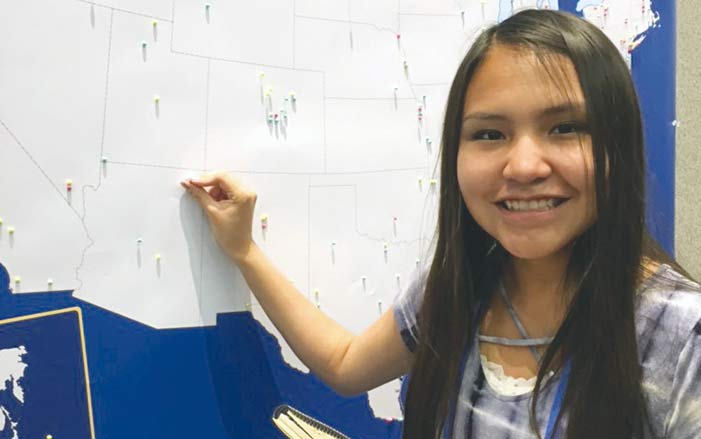 Submitted
After registering for the Scripps National Spelling Bee in Washington, D.C., Kelly Haven sticks a pin in Fort Defiance, Arizona, to represent where she comes from.

Navajo Nation Spelling Bee champion Kelly Haven did not meet her goal of making it to the televised portion of the Scripps National Spelling Bee last week. But the third-time Navajo champ is glad she went.

“I’m so happy I was there for a history-changing moment,” said Kelly, who at 14 officially ages out of the bee this year. She was referring to the bee’s first-ever, eight-way tie. “I knew all those kids,” she said. “Two of them are my friends. I’m so proud of them.”

Kelly herself once again survived into the third round, correctly spelling “durum” (a kind of wheat) and “corrodible,” which she remembered from her science class. Unfortunately, her score on the written vocabulary portion of the test was not high enough to make into the top 50 contestants who compete in the televised portion of the bee (500 young competitors start out).

Kelly, the only Native American to compete this year, said she found out about 3 p.m. last Wednesday that she hadn’t made the cut, although she already suspected as much. “Then I could just relax and watch the bee,” she said.