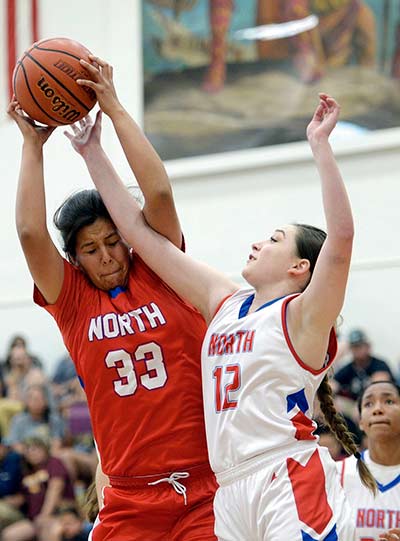 Though they fell short in both of their New Mexico High School Coaches Association All-Star Games, the Northwest Small School girls’ basketball team proved themselves.

As the only all-Native team among the NMHSCA All-Star teams, the team had hoped to turn heads and perspectives about Native players.

“I told the girls we didn’t quit,” he said. “Usually, that’s something people see from us is they just quit, I told them, but you didn’t quit, we were fighting and again today.”

In their first game against the Southwest Small School team, Northwest fell into a 16-point deficit and remained there for nearly a quarter before pulling themselves out in the second half of the game.

They tied the game, but eventually came up short in the final seconds. Southwest defeated Northwest 73-71.

The situation was similar in their second game, but they went down fighting. Northwest fell short to Northeast 79-71.

Salazar said the games proved just how capable his all-Native team was.

“They did great,” he said. “Even yesterday’s game; we played a heck of a game yesterday. We were down 16, two or three times … We got there at the end and just didn’t take care of the ball there.”

Salazar said though the team lost two close games, there was still plenty to be excited about.

He said in just three days, the coaches and the players developed a bond that they hadn’t quite imagined at the start of the all-star weekend.