On the front line: Diné scientist working toward cure for COVID-19 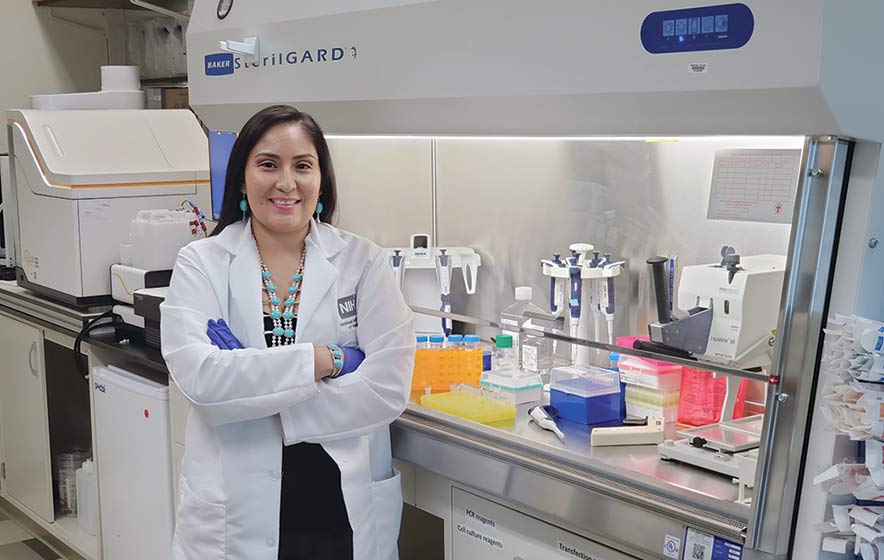 Kristina Gonzales-Wartz could have been a poster child for why there are so few Natives in the STEM fields.

In tiny Sweetwater, Arizona, where she grew up, she had no scientist role models.

She had to start with remedial classes when she went to college. Her bachelor’s ended up being in American Indian studies.

But there she is now, on the front line of biomedical research, working on a cure for COVID-19.

You could say she is a poster child for resilience.

“I certainly never imagined I’d go this far,” she said.

Her lab was actually working on other things when COVID hit.

Wartz and her colleagues start with plasma taken from people who have recovered from COVID-19 (the “convaslescent plasma” you may have read about).

“We then identify which antibodies they produced that link to SARS Coronavirus-19,” she explained.

The hope is an antibody “cocktail” can be administered to COVID patients to help them fight the disease. It’s still in the research and development stages but has been used by volunteer patients around the country, including President Donald Trump, with promising results.

Antibodies may also be used in vaccines, Gonzales-Wartz said.

Talking to her today, Gonzales-Wartz sounds like a confident young leader. But when she first came to the NIH on an internship-type program from New Mexico State University two years ago, still working on her doctorate in biology, “it was terrifying,” she said.

Once she got down to the research, “it was so engaging,” she said. “I’m a person who likes learning new things, and I was learning new techniques every day.”

It’s been a long road for Gonzales-Wartz. She started out at little North Idaho College in Coeur D’Alene, where she said she was told by a recruiter she would be on the volleyball team.

“I got up there and the coach didn’t even know who I was,” she recalled. “I think they just wanted to get more Native students there.”

Homesick and discouraged by having to take the remedial science courses, she lasted through the school year before transferring to Columbia Basin College in Pasco, Washington, where she did get to play volleyball and earned her associate’s in general studies.

She then entered Haskell Indian Nations University and completed a bachelor’s in American Indian studies before heading to NMSU for graduate work.
“I didn’t really start taking much science until I was in grad school,” she said.

But it had always been in the back of her mind to be a scientist. In junior high, she had taken a distance learning class sponsored by NASA. In high school biology, she was one of the few kids who didn’t get grossed out by dissecting animals.

“I thought it was fascinating,” she said. “I’ve always been very inquisitive, so I had the build for science, I guess you could say.”

Knowing she was behind some of her peers who had been in science all along, she jumped at every opportunity for enrichment.

She was part of the Research Training Initiative for Student Enhancement, which introduced her to the NIH.

She then applied for an Intramural NIAID Research Opportunities position, starting out with a group looking for a substitute for blood to be fed to mosquitoes for research purposes (https://navajotimes.com/ae/people/bloodless-coup/).

In May of this year, as COVID cases hit their peak on the Navajo Nation, she transitioned into a full-fledged lab technician with the antibody unit.
At 33, Gonzales-Wartz, who is and , has found her calling.

Her husband and two sons (soon to be three, she revealed during the interview) moved with her to Rockville and are adjusting fine, she said.

Her husband found a job installing solar applications, so both spouses are engaged in making the world a better place.

Eventually, she would like to move back to the reservation, if she could find a job that utilized her skills.

“At this point, there aren’t any research labs on the Navajo Nation, so I would have to be in Phoenix or Albuquerque where they have national laboratories,” she said. “But at least I’d be closer to home.”

Gonzales-Wartz said her family has supported her every step of the way, and her mother, Laverne Gonzales, seconded that.

“I am so proud of the choices she’s made in life and becoming such a successful young woman,” Gonzales said. “I often remind her to thank her extended family for their support, prayers, teachings, encouragements, etc.”

Gonzales-Wartz’s advice for other young Natives interested in furthering their education might come as a surprise to the bookish set: Take up a sport.

Red Mesa may not have offered all the science courses, but it had a full slate of girls’ sports teams. Gonzales-Wartz played volleyball, basketball and softball.

“I can honestly say most of what I know about handling success and failure, about keeping going when you feel like giving up, I learned on the volleyball court,” she said.

It’s important to have diversity in science, she said, “because we all come from different backgrounds and we have different ways of thinking.

“We have a better chance of solving a problem when we look at it from a lot of different perspectives.”

And how’s the view from the front lines of the battle against the virus? Gonzales-Wartz sees a cure in the near future.

“There’s so many people working on this right now, a lot of very smart people,” she said. “I know we will come up with something soon.”