With a $19 million-dollar investment from the Navajo Nation and nearly $60 million from its own investors, on Oct. 1 medical glove manufacturer Rhino Health Inc. broke ground on a second plant in Church Rock, New Mexico, that, once up and running, will produce $1.5 billion “made on the Navajo Nation” nitrile gloves per year. 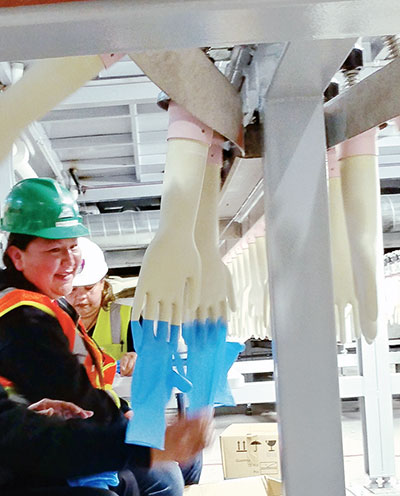 Courtesy photo
President Jonathan Nez joins Rhino Health employees to pick a few medical gloves off of the Factory 1 production line on Oct. 8. A groundbreaking was held for the expansion of the glove manufacturing plant.

“This state-of-the-art facility will exponentially grow our production and transportation operations,” said Rhino Health Chief Executive Officer Mark Lee. “It positions us to meet market demand for a Navajo product.”

Construction will begin in 2022 for the new 100,000 square-foot factory building that will be four stories high and the size of two football fields.

“What I call version two is a very sophisticated, humongous machine,” Lee said.

The first Rhino Health plant, which started operating two and a half years ago, is the only nitrile glove manufacturer in the United States, said Lee.

“We are the only one and it’s empowered by Navajo,” he said. “It’s a very historical thing.”

Currently Rhino Health has 54 employees, 98% of whom are Navajo.

?“This is sovereignty at the highest level,” President Jonathan Nez said. “We are practicing the teaching of our elders known as T’áá hwó’ajít’éego, or self-reliance and self-determination.”

“It is great working for a growing company and a CEO who cares for his employees, and the Navajo people,” Willie said. “It is an honor that Mr. Lee chose the Navajo Nation as his foundation and it is very exciting to see the expansion of the company, and to be a part of it.”

Willie said the most exciting part now is the many employment opportunities that will become available into the future.

“The Navajo people are deserving of good jobs that are located here on our homeland,” said Delegate Jamie Henio, who represents Alamo, Ramah and To’hajiilee. “Speaker Damon and the Navajo Nation Council plan for more construction projects that will create jobs and uplift our economy during a pandemic. This groundbreaking is the first step.”

In October 2019, Speaker Seth Damon sponsored a bill that allocated $19.2 million from the Sihasin Fund for the construction of the factory.

The Sihasin Fund was created to provide financial support for the planning and development of Navajo regional infrastructure projects.

Nez signed the bill, passed unanimously by the Navajo Nation Council, into law.

“Job creation and the development of infrastructure projects on the Navajo Nation is a top priority,” Damon said. “Especially when small businesses and companies locate these jobs in our communities.

“The expansion of the Church Rock factory is one of many other economic proposals that will jumpstart the Navajo economy and keep our people employed,” he said.

Damon thanked the Division of Economic Development and the Navajo Engineering and Construction Authority for their leadership in bringing the project to fruition.

“It’s been a long journey,” Lee said. “I’m very excited, appreciative and looking forward to growing synergies and being able to be a very important community partner.”

“The Navajo Nation has numerous opportunities to create facilities, employment, revenues and business expansion for our Navajo people,” stated Lizer. “We’re very appreciative for Mr. Lee’s committed entrepreneurship that the Nation invested in.”

Nez said that the gloves produced by the factory has also helped many Diné people and front-line warriors protect themselves from COVID-19.

Lee said despite the challenges associated with the pandemic, including COVID-19 restrictions, and the huge demand for medical gloves that exceeded the current plant’s production capacity, with special permits from the Gov. Michelle Lujan Grisham’s office, glove production at Factory 1 never ceased.

“Despite all the challenges, we’re working three shifts a day, 24/7, and we haven’t closed one day since we opened up two and a half years ago,” he said. “At the end of the day, we are running a business and we have to build a fine reputation and brand image.”

“I made a promise to the speaker and president and every delegate when they trusted us with $19 million of funds,” Lee said. “I’m going to fulfill my promises to bring not only more jobs but continue to deliver the highest quality medical gloves in the United States.