A roomful of Greater Aneth Oil Field employees, contractors and vendors waited anxiously to receive an update from Elk Petroleum Inc. officials about its Chapter 11 bankruptcy filing made on May 22.

Rumors of negative impacts, including job losses, rippled through the community, which includes Aneth, Red Mesa and Mexican Water, and sparked concerns about job security and outstanding pay and invoices.

“It’s really important to understand the difference between a Chapter 11 and a Chapter 7 bankruptcy filing,” said Dave Koskella, Elk’s chief operating officer, at the meeting on Wednesday. “Chapter 7 means liquidation—sell everything, and the business will no longer exist. Chapter 11 is restructuring, which is a court-ordered transparent process.”

Koskella explained that Elk’s management team will focus on the Chapter 11 process, which he expects will take two to three months.

“It facilitates a company that has strong assets and a vision of going forward that works,” said Koskella. “You might want to consider it sort of an Elk 2.0, with new management,” which was met with a round of laughter and served as an icebreaker.

Koskella has been COO for only weeks but has a strong engineering, finance and oil industry background, he said.

“But as we heard today, it’s a reorganization, and might actually turn out best for the company,” said Atcitty. 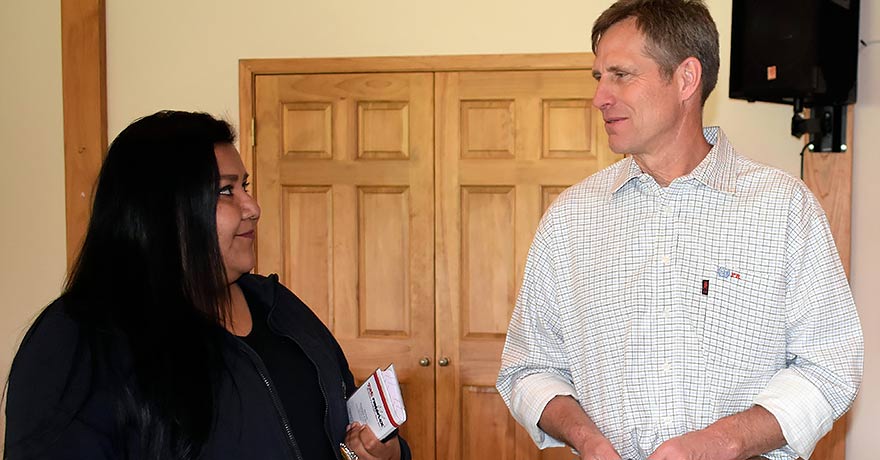 He estimated there are approximately 100 Navajo employees and 100 Navajo contractors who work for Elk.

Tensions melted as it was explained there would be no job losses and a 100 percent commitment to making all outstanding payroll and payments.

“This is a business that can move forward as a successful entity,” assured Koskella, who confirmed everything is “agreed to and approved” to continue “business as usual.”

Elk Vice President Jeff Roedell is the Greater Aneth Oil Field business manager. He explained that keeping the operation as a going concern can only help get through the process.

“The field out here is doing fine,” said Roedell. “We’ve been doing well on our production. We can support our vendors. The idea is to keep the cash flowing and revenues coming in.”

Other Elk Petroleum properties, including underperforming assets in Wyoming and Australia, will be split off and sold in a separate process, said Koskella, and the goal is to make the Greater Aneth Oil Field a stand-alone operation.

“What we can’t do is support unproductive assets,” explained Roedell. “We’re going to shed some of those parts that aren’t pertinent and get away from parts of the business that are basically a burden.”

Roedell suggested the company will become more of an “Aneth Central” entity.

“It might be a little bit of a bumpy road for all of us for a little bit, but once we get through it, I think it will be better,” said Roedell.

There is an upside potential for the community, because the business will be consolidated to be more profitable and the goal is to invest in local development, said Koskella.

Most of the employees and contractors agreed that the information shared was positive, and the good news exceeded their expectations.

Teri Maryboy, with Maryboy LLC out of Montezuma Creek, Utah, said the news was better than she had anticipated.

“We’re pretty confident in the direction the company is going into the future,” said Maryboy. “We stand behind them, and hopefully going forward we can all profit.

“Nobody expects to hear the company they work for is filing for Chapter 11, but we’re grateful it’s not Chapter 7,” added Maryboy.

Koskella said that Elk Petroleum will be transitioning to become private equity company that is focused on Aneth.

The intention, he said, is to “grow, create value and reinvest profits” into the assets.

“We’ll also have more money to invest in projects,” he said. “That’s what the future holds. There is a lot of good news in this process.”

“It’s a great asset. It’s run by great people,” said Roedell. “The reward will be to reinvest more in the field and create more jobs. That’s the plan.”

Atcitty is confident as well.

“It’s good news that we may be able to get back on our feet, and do well for the company, the community, and the Navajo Nation at the same time,” said Atcitty.

As part of his job with Elk, Atcitty administers a fund of $100,000 annually that supports local chapter projects and Navajo Nation events.

Royalties from Greater Aneth Oil Field also go back to the Navajo Nation and the Utah Navajo Trust Fund.

“It has to survive with the amount of oil that’s still there,” concluded Atcitty. “To me, it’s going to flourish if we do it the right way.”