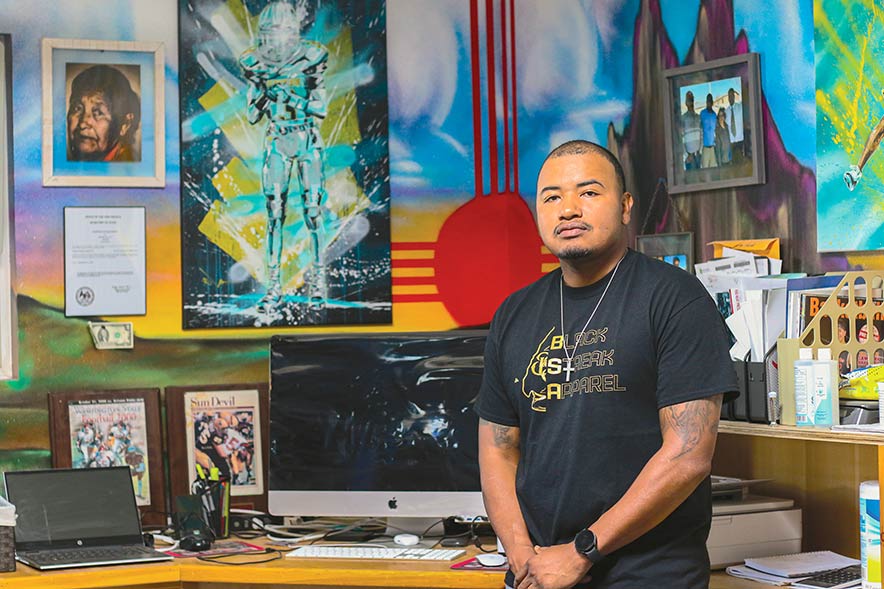 Special to the Times | Cyrus Norcross Roddell Denetso poses for a photo inside his shop, Black Streak Apparel, in Shiprock.

The idea of having his own shop surfaced roughly 10 years ago for business owner Roddell Denetso.

The Ganado native spent time dabbling with graphic design and screen-printing and through the years, his work in the field helped launch his expanding business.

Denetso is the sole proprietor of Black Streak Apparel, a clothing line that specializes in team uniforms.

His shop is in Shiprock, and the company name derives from one of his clans – Tsi’naajinii, which means Black Streak in the Forest People.

“I always let people know how I got the name for my business,” Denetso said. “I think it’s important, so they can understand why I named it Black Streak Apparel.”

Before becoming an entrepreneur, Denetso had just started managing an on-campus print shop at Navajo Preparatory School. And when the pandemic hit, the school was forced into virtual learning, leaving the shop vacant.

“There were some talk into closing the shop, and I would be helping out with IT,” Denetso said.

The funding for the shop eventually got allocated to other areas, and although he still had a job with the school, Denetso resigned to concentrate on his business.

“You know, I could have done IT,” he said. “I’ve done it before, but this was my opportunity to expand, expand on what I’ve been doing over the years.”

Before managing the shop at Navajo Prep, Denetso worked for Advertising Ideas, a Farmington-based business, for five years.

“I did a lot of their graphics, and I worked full time with them,” he said. “Not only did I do graphics, I learned the business aspects of it, like getting quotes and working with sales.” 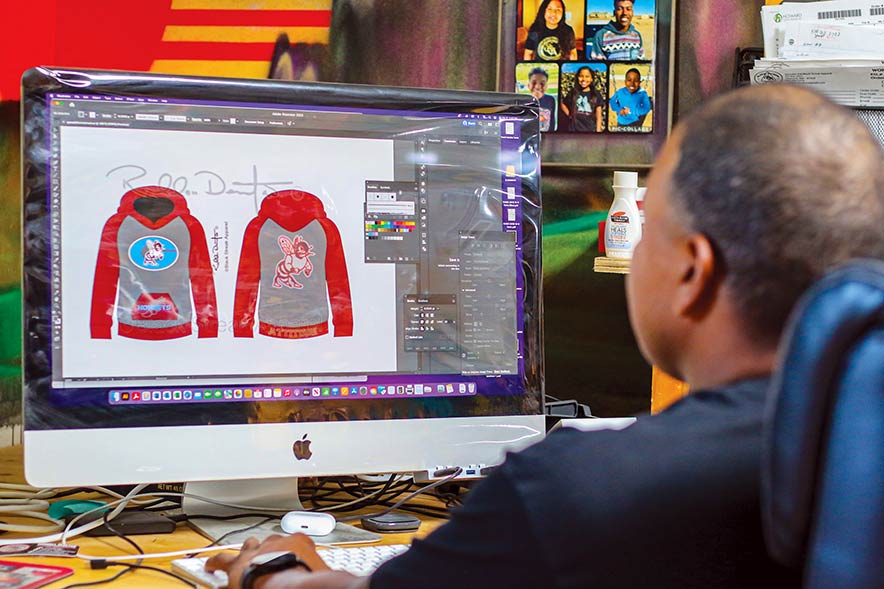 While at Advertising Ideas, he worked with many Native clients interested primarily in having Native imprints on their designs.

That motif is still popular with his current customers. And while other companies run templates, Denetso said his creation is “all original.”

“I take pride in making every set different,” he said. “I don’t do any templates, and I don’t like to do rug patterns and throw a teams’ name on there.

“I try to make each one different and original so that there are no uniforms that are exactly the same,” he said. “Everything I do is custom made.

“I design it, I print it, and I cut and stitch and sew the order,” he said. “I do everything in my little shop.

His shop is roughly 36-feet by 24-feet, a modest building enough to house his equipment.

“It’s not anything that’s crazy huge,” he said. “It looked pretty good when I as building it, but now I’m needing more space. It’s a fully functioning shop, and it’s just me.”

At his shop, Denetso said he does everything from taking orders, giving out quotes and doing mockups with the art and design, and finally making the product.

“Aside from what’s being sublimated, I do all the work,” he said.

Before making each product, Denetso does his homework, looking at ways to identify and embody the cultural aspects of each client.

“I do research before I make stuff for a team,” he said. “If I do something for the Choctaw tribe, I research their most dominant designs and I incorporate that into their order.

“A lot of my customers like that, and that is what separates me apart,” he said.

Before building his shop, Denetso said he looked into leasing a building within the Shiprock area. He reached out to the Navajo Nation, but he ran into red tape like most startup businesses.
“I couldn’t get a shop anywhere,” he said.

Denetso also considered buying a modular unit from one of the school districts, but nothing became concrete.

“They told me they would come back to me, but they never did,” he said. “Finally, I just thought about building it myself. With the money that I had saved up, I started to buy my equipment.”
And after a few orders, he used that cash flow to buy more equipment.

Since his humble beginnings, Denetso said he’s worked with over 500 clients.

“I started out small,” he said, “now I’m swamped but in a good way. The word is getting around. I got customers from all over the United States.”

His clients come as far away as Hawaii, and just recently, he completed an order of 100 jerseys for the upcoming Lakota All-Star game, which is scheduled for April 23 in Rapid City, South Dakota.

“Stuff like that really hits you,” Denetso said. “It’s huge because they’re choosing a little company like Black Streak Apparel over Nike, and that’s cool.”

“It’s not just basketball,” he said. “I did a set of wrestling uniforms for Blanding Elite Wrestling in Utah.

“I also did some softball uniforms for the New Mexico Wildcats,” he added. “They played in Albuquerque, and when the tournament was over, I got six more calls for more orders on softball uniforms.”

Besides doing team apparel, Denetso has expanded his business into promotional products.

“Gosh, you name it, I’ve done hoodies, uniforms, and fan gear with my personal clothing line,” he said. 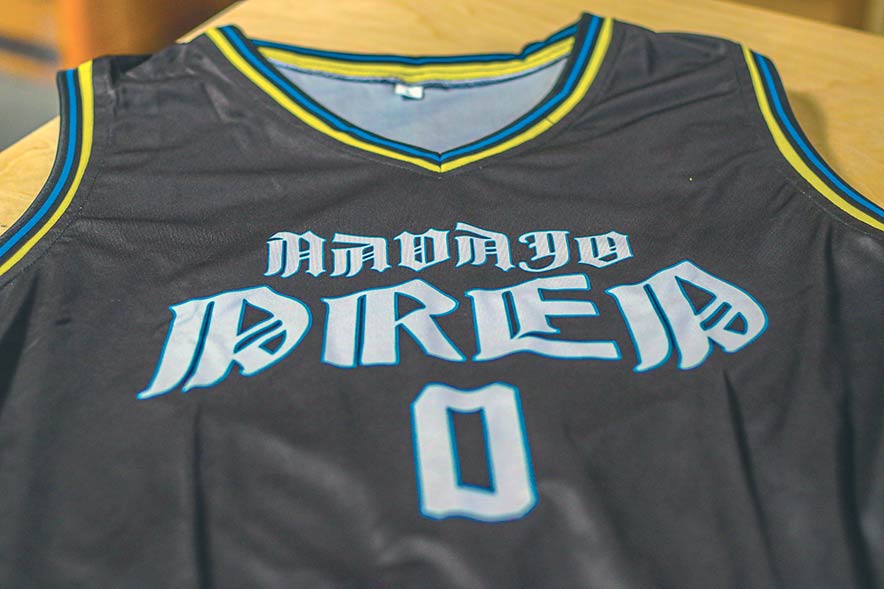 Denetso is also delving into another realm, working with programs such as the Gila River Wellness Center. The center ordered 125 hoodies, 75 tights, and 50 shorts from Denetso.

“It’s for their wellness program,” he said. “They’re doing an incentive program for their people that register for there 10Ks and 5Ks.”

He also got inquiries from the Ojibwa and Chippewa tribe in Wisconsin.

“They’re looking to do the same thing,” he said. “My business is expanding fast, and I know I’m gonna need a bigger building. I just gotta prepare for growth.”

And although his business is booming, Denetso gets satisfaction in knowing that his product is making a difference in someone’s life.

“I really didn’t know what I was getting into,” he said. “I mean, it’s really impacting others. It’s giving people motivation, and I think that’s really cool.

“I think for me, that’s my greatest reward,” he added. “I know I’m not gonna be a millionaire off of my business, but I just love seeing people have their eyes light up, especially when I deliver the uniforms to the kids.

“That’s where I get my satisfaction from,” he said, “and it makes me proud.”

Denetso said the biggest message he would like to convey “is to never give up on your dreams.”

“Looking back, I should have started this 10 years ago when I first thought of it,” he said. “I went through a lot of obstacles to get my business going, and for me, I think it was getting over that fear. I think a lot of us get stuck on our dreams because we’re afraid to fail.

Those “what ifs” have been replaced with an optimistic outlook for Denetso’s fledgling business.