Diné burst into the mainstream: May the YouTube algorithm be in your favor 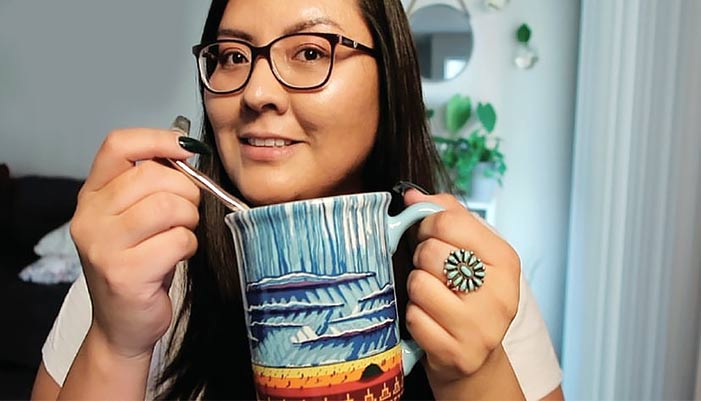 The small world of Native YouTubers has seen significant strides over the last few years but has yet to produce a creator who could ascend into the mainstream consciousness of the YouTube world.

That was until Sierra Johnson, a Diné creator who does a mixture of vlogs and sit-down videos, got pushed to the forefront of the YouTube algorithm to garner over 6,000 subscribers in just two months, according to data from Social Blade.

Her top 12 videos on her channel have garnered over 10,000 views with her most viral video sitting at almost 100,000. She was even featured on YouTube’s main Instagram that has 25.3 million followers, and the post about her was watched over 300,000 times.

“It was an accomplishment for my people,” Johnson said in a phone interview. Then, “EmmyMade in Japan,” a channel with 1.8 million subscribers, recreated Johnson’s Navajo coffee recipe which opened the door to a whole new non-Native audience to engage with her.

Another top Navajo YouTuber, Natalie Franklin, saw her channel grow over time and has seen wild success. Her videos regularly garner thousands upon thousands of views. She was one of the first, if not the first, Navajo YouTube creators to reach 10,000 subscribers. One of the other creators who has seen significant growth in the last year is Jojo Jackson, a recently viral TikToker, who gained over 2,000 subscribers in just one month last year, according to data from Social Blade.

On TikTok, Jackson’s most viewed is a TikTok of 100 layers of Taki dust that has over 14.3 million views. Interestingly enough, Indigenous TikTokers have been able to gain mainstream popularity on the app with a handful of them gaining hundreds of thousands of followers.

This type of interest in an Indigenous creator has yet to translate to YouTube where the algorithm is ever-changing and complicated to push through. This is why most Indigenous YouTubers gain a few hundred in a month but rarely get into the thousand range.

That was until Sierra Johnson’s video “An (old) Navajo Coffee Recipe” got picked up by the algorithm. “It’s been scary but I’m very grateful for it as well,” Johnson said in the phone interview. “It’s been scary because I’m not used to that type of attention.”

Johnson has been on the platform for about two years now. She joined in the summer of 2018 and it took almost a year for her to pass the 1,000-subscriber mark which is a big accomplishment for the niche community of Native YouTube. Once she hit that marker her channel started to blossom. Johnson never expected her channel to grow past 5,000 and certainly didn’t think an old Navajo coffee recipe would be the video to garner such viewership.

Chef Brian Yazzie would refer to the coffee recipe as “a survival recipe.” On the video he commented that wheat flour (a component of the recipe) isn’t indigenous to North America and did not exist here pre-Contact. He also gave a brief history of how this recipe is a direct result of colonization that Johnson really appreciated.

“It got normal views as usual, nothing out of the norm,” Johnson said of the video. “Three weeks later, that’s when all these comments kept coming through.”

The views began to skyrocket and so did her subscriber count. There was a point where Johnson was gaining about a thousand subscribers a day. “I don’t know how people started watching it,” Johnson said, confused. But they did and more came with them.

It was a whirlwind moment for Johnson. “I’ve never felt that feeling of accomplishment before,” Johnson said. “I went to school. I graduated and all of this. But I never felt that specific feeling. I just couldn’t describe how I felt.”

Johnson graduated with a degree in graphic design from Arizona State University. She started her YouTube channel as a way to show a different side of rez life. This place is more than its statistics — 42% unemployment rate, 43% live below or at the poverty line, 56% high school graduation rate and only 7% go on to graduate from college.

“I live in the city but my family lives on the reservation,” Johnson said. “I go home fairly often and that’s what I wanted my channel to basically do is say, like, ‘Hey, go home. It’s fun here!’”

She created her channel as a way to show the fun and exciting to-do’s on the Navajo Nation from fair season to hiking to just hanging out. It has also become a space where she can encourage other Navajos to learn more about Navajo culture and language.

“I feel like I just share videos and that’s it,” Johnson said about her new status as a top Native YouTuber.