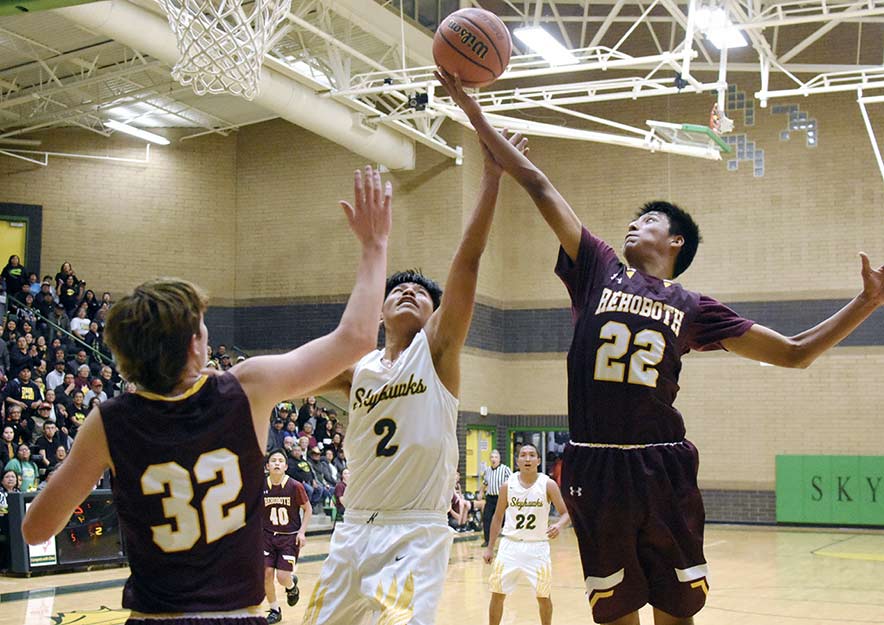 Navajo Times | Donovan Quintero
Rehoboth Lynx Mato Chapman (22) grabs the ball from Newcomb Skyhawk Deion Johnhat (2) on Wednesday night during the District 1-2A basketball tournament in Newcomb. Rehoboth beat the Skyhawks and will play the Navajo Pine Warriors at home on Friday 6 p.m.

If you weren’t in Skyhawks country on Wednesday night, you simply missed out.

The showdown between the No. 2 ranked Newcomb and No. 3 Rehoboth did not disappoint.

For Lynx fans, that is.

Rehoboth arrived to Newcomb ready to battle it out, and it paid off with their 49-45 win over the Skyhawks in the second round of the District 1-2A boys basketball tournament.

“I’m just super proud of my guys,” said Lynx coach Kevin Zwiers. “This is round five for us with Newcomb. There aren’t any secrets between us and Newcomb anymore.”

Zwiers said his team benefited from early foul trouble for the Skyhawks.

“That messed up their rotations, but they’re such a tough team,” Zwiers remarked.

Rehoboth’s Seth Lee and Preston Hawthorne both made four out of their five penalty shots in the early minutes of the first quarter. Combined with points contributed by Jake Zylstra and Talon West, the Lynx got the momentum they needed to kickstart their offense.

Still Newcomb’s defense forced turnovers and managed to keep the game within two points at the end of the first quarter, 12-10, despite showing frustration on the court.

Four dunks by the Skyhawk’s Deondre Begay’s and two by Manoah Lee kept Rehoboth from running away with the game.

Newcomb Skyhawk coach Dominique Richardson said he told this team in the locker room they needed to keep playing their game.

“It’s just one of those things where we just have to,” Richardson said. “We gotta dig deep and get those rebounds if we want to win the game.

“We have probably had our worst first half ever and we were only down one point,” he said.

Richardson said it wasn’t fatigue that caused their loss.

“In a game like that, fatigue is not an issue,” he said. “We came and we did what we were supposed to do but this is game of runs. You can’t get lackadaisical.”

The start of the third quarter, Newcomb adjusted their defense and came out pressuring the Lynx full court. The adjustment paid off and Newcomb took the lead 29-25 as their fans cheered “defense, defense.” 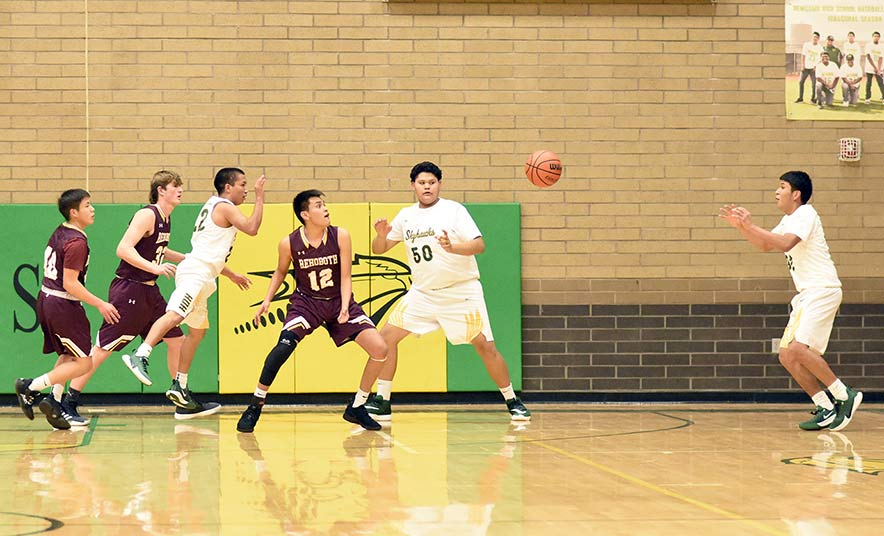 Newcomb Skyhawk Deondre Begay passes the ball past Rehoboth Lynx Seth Lee (12) to his teammate during the District 1-2A basketball tournament in Newcomb.

Rehoboth called for a 30-second timeout. They came back onto the court and answered the call and started passing the ball to one another.

But the momentum shifted to the Newcomb bench that quickly took a four-point lead to an eight-point lead as time expired in the third quarter with a score 38-30.

Zwiers and the team stayed calm and took the ball to the Skyhawks. Two technical fouls were given to Deondre Begay, giving Rehoboth a chance to cut the lead.

The Lynx got the ball back and, again, the referee blew his whistle, indicating a Newcomb player had committed a foul. It was Deondre Begay, who now had four fouls.

Hawthorne missed the free throw, but Zylstra grabbed the rebound and scored, making the score 40-35 with less than 6 minutes to go.

In the third quarter, Newcomb’s Deion Johnhat was the team’s biggest scorer, helping his team score 13 points before the start of the fourth.

But in the beginning of the fourth, Newcomb’s offense fizzled and only scored a combined total of 7 points, compared to Rehoboth’s 19 points that got them the win, 49-45.

“But Rehoboth, give credit to them. They came out and they battled,” Richardson said of the fifth time the teams have played each other this season.

With the win, Rehoboth is now the district’s top dog and will host No. 4 Navajo Pine, who knocked off the Dulce Hawks, 61-59, in Dulce. The two face off on Friday in Rehoboth at 6 p.m.

“We split this season,” Zwiers said of Navajo Pine. “They beat us on our court, we beat them on their court. So this is the rubber match right here.