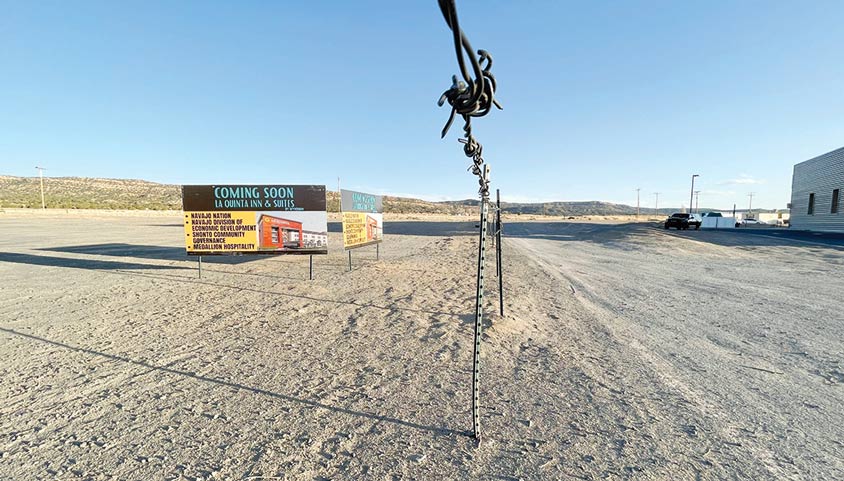 Community leaders hope the new hotel underway at the corner of U.S. Route 160 and State Route 98 will boost the local economy.

Some residents of Shonto and Black Mesa, Arizona, gathered with community leaders earlier this month at a groundbreaking ceremony for a 54,000-square foot La Quinta Inn and Suites with views of Naatsis’áán and Dziłyíjiin.

The hotel will be an interior corridor property with 83 rooms, including suites and a heated pool, said Arlene Edd, chair of the Shonto Economic Development Committee, a sub-committee of Shonto Community Governance.

It will feature conference rooms, offices, high-speed Wi-Fi and complimentary breakfast, among other features.

“Fourteen to 16 months from now our community will see our accomplishment,” Edd said. “The last few years we’ve come a long way – maybe one more than the other – but together as a team we made this dream become a reality.”

Shonto Community Governance, along with Shonto Economic Development Corporation, partnered with Medallion Hospitality, La Quinta Inn and Suites, and the Navajo Abandoned Mine Lands Reclamation Department to make it all happen two years ago in Na’nízhoozhí.

Delegate Herman Daniels Jr. and members of the SCG and the SEDC met with representatives from Medallion Hospitality and toured two of the Medallion hotels on that occasion.

That’s when the partnership began, said Robert Black Jr., the secretary-treasurer for SCG and the executive director for the Navajo-Hopi Land Commission.

“The motive for this business is for our children and to create jobs for them,” said Daniels, who represents Naatsis’áán, Oljato-Tsébii’ndzisgaii, Shą́ą́’tóhí and Ts’ahbiikin (better known as NOST), “so that they won’t have to travel so far away from home. They can travel only a few miles and stay close to home – as well as economic development and to help our local economy.”

Plans for a hotel at the corner of Route 160 and SR 98 started more than 30 years ago. President Jonathan Nez, the former NOST delegate and a former vice president for Shą́ą́’tóhí Chapter, said the vision at that time was to embrace sovereignty in the community, meaning self-governance and self-determination.

“We had a lot of meetings,” Nez said. “We had a vision of putting a store here and a hotel – the future. With the hotel, we had this grand vision that we could be able to do this ourselves … and we wanted to run the hotel ourselves in the long run.”

Nez said when he was helping with hotel plans there was the idea of offices for the members of SCG on the top floor.

“This is our vision … to see an economic tourism corridor through the Navajo Nation,” Nez said. “Everyone knows people go to Las Vegas to gamble and when they get there, they come to the Navajo Nation. The traffic flows from Las Vegas into Page. You’ve got the slot canyons there. That’s why we put a travel center here.”

The Shonto Marketplace opened its doors for business on May 2, 2017.

“People are going to stop here as they go from here to Kayenta and on to Monument Valley,” Nez added. “(Tourists can also) go to Tuba City and on to the Grand Canyon. After Grand Canyon, they go back to Las Vegas. That should be the Navajo Nation Grand Circle.”

Nez said his administration is looking forward to doing more projects in tourism and trail development, including planning a visitors’ train on the nearby former Black Mesa and Lake Powell Railroad.

The La Quinta Inn hotel project is being funded through a $5 million allocation from the Permanent Trust Fund interest income, $3 million from the Navajo Nation Division of Economic Development, and $3.1 million from the Abandoned Mine Lands.

Stanley Yazzie, the southern representative for SCG, said 10 acres was set aside for the hotel in the 1980s under the former Jones Grass administration.

“It wasn’t just one person (who planned the hotel), it was several administrations that came,” Yazzie said. “Right now, it’s the Shonto Economic Development Committee. They’re responsible for what will happen (with the hotel).”

Daniels added, “It seems like it was just yesterday that Shonto Marketplace opened for business. But that’s been a few years now. Once this new hotel goes up, it will be beautiful.”