‘A huge blessing’: Native netter makes it to Valley regionals on club team 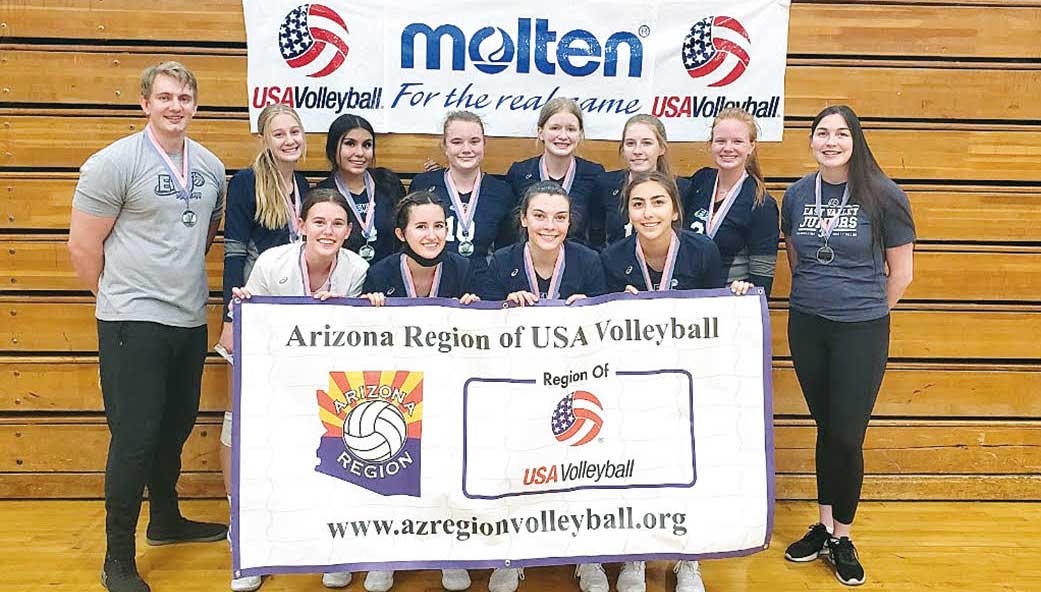 The Begay family, originally from Farmington, moved to Phoenix almost five years ago. The transition was difficult at first, but Tatumn had a passion that would douse that and any other difficulty in her life: volleyball. She has been interested in the sport since junior high, but since coming to Phoenix she found many different opportunities to play.

When she started school at Desert Ridge High, a 6A division school, she joined the volleyball team while at the same time participating in volleyball clubs.

The move to the Valley took some getting used to, but according to her mother, Gayla Begay, Tatumn adapted to her new surroundings.

“Initially, people or community members thought Tatumn was of Hispanic descent, but when they did learn that she’s Diné, they were always welcoming,” Gayla said. “The community here is very diverse, but a majority of the time we are the only Natives.”

It was also quickly apparent the big city was a different world when it came to high school sports.

“When Tatumn attended her first high school camp a few years ago, we noticed a great amount of other athletes had more opportunities than us smaller-town folk,” Gayla said. “Many athletes here had special athletic trainers and numerous camps close by, all helping enhance their athletic performance.”

Tatumn was feeling a bit outclassed when her dad, Stevenson, reminded her she was Diné, and the Navajo have never shrunk from a challenge.

“We also reminded her and all our kids of their great grandparents’ stories: their ancestors’ history,” Gayla said. “That always brings about inspiration.”

She would play the position of middle blocker, but according to Desert Ridge’s head volleyball coach, Anthony Millanes, Tatumn has a variety of different skills and qualities that she brings to the team.

“Most middle blockers are usually tall and good at blocking things,” Millanes said. “But Tatumn is one of the best all-around skills set in our gym. She’s a solid player and she always has been.”

In addition to loving the sport, Begay also found that it has helped her to reach her goals and has had an overall positive impact on her life.

In addition to volleyball, Tatumn has gained a passion for weightlifting. Funnily enough she used to hate going to the gym, but thanks to the structure and routine volleyball provided she became fond of the practice and now even takes the time to help new members train and lift.

One of Tatumn’s proudest achievements was making it to varsity in her sophomore year. It was something that she worked on for a whole year; improving her strength, speed and stamina.
“In her freshman year she made it her goal to make varsity,” Gayla said. “And having to be a smaller player for her position and being at such a big school with a very good volleyball program, that was gong to be a battle. But she made the goal one day saying, ‘I’m going to make a practice workout and I’m going to not miss any of my summer workouts,’ and she didn’t.”

She stuck to her workout plan and in July she was the only sophomore to make varsity. It wasn’t just seeing her play alongside the older girls that made her parents proud.

“It was more of the accomplishment of how her little steps every single day toward that goal was accomplished,” her mother said.

During her time playing volleyball she would continue to develop her skills while bringing a positive attitude to her team.

“She’s just a character,” said Millanes. “She’ll tells jokes and laughs around with friends and just hang out and be a teenager. She’s your typical teenager but as far as being an athlete she has a good balance of when to quiet down and work hard, and turn it up and be fun.”

This past season though things changed drastically when the COVID-19 pandemic struck. There was much confusion in the early days as teachers and coaches tried to adapt to the chaotic situation. Eventually, Tatumn was able to play both school and club volleyball, but there were a lot of key differences this season: Having to play with masks, having few to no fans and playing with the risk of the season being canceled should anyone catch the virus.

“It was such a different atmosphere as far as volleyball was concerned,” Millanes said. “Just with the rule changes and safety procedures we had to follow. I told the girls, ‘The fact that you even played through the season is a testament to how mentally tough you are.’… It wasn’t the season we had hoped it to be with the winning, but as far as fighting through stuff as a team and showing fortitude, these girls were tremendous in doing that all year long.”

Tatumn and her team continued to play to the best of their ability. Tatumn missed the last portion of the school season as she was put into quarantine (and came back healthy), but she still had the chance to play with her club.

Despite the anarchy caused by the pandemic, the East Valley Junior club was able to qualify for the regional championships. The club battled hard for the top honor, but fell short and came in second place.

Tatumn was disappointed that they couldn’t reach the high mark this year, but her parents are still proud of her.

“I was still so very proud of her,” Gayla said. “My husband and I, we hugged her and told her ‘You did a good job,’ and that’s because Tatumn did her role. She had a lot of blocks, her energy and enthusiasm was 100 percent from the start of the game to the very last set, and that’s all my husband and I ask for, to always give it your very best and don’t get down on losses because that also builds the character of the athletes.”

Despite the loss, Tatumn says it was still an overall great year.

“My club season, it was really good. I love my team so much, and I made so many friends on that team and we just have a bond and a chemistry that I never had before … All my time while in club I never was able to get into finals or regionals and that was a just a experience that was cool because I never experienced that before.”

Tatumn is now taking this time to train and better herself for her coming senior season. Pandemic or no, she is determine to make her senior season a standout: her new goals now consisting of getting all A’s and going to state.

Millanes has no doubt that Tatumn will improve herself and can even see her becoming a leader for the future team.

“Every day, no matter what you ask her to do she will give her best effort and she will try to be a good role model for all the other players. She has all those good intangibles for being a good leader,” Millanes said.

“She is always the same: kind-hearted, supportive, a good person towards her teammates and who just loves volleyball, and it’s fun to have those girls in your gym because they make your program really solid, so having her for these last three years have been a huge blessing for our program.”

Likewise her parents see great things for her in the future. She has proven she is capable of breaking boundaries, and she will do so again.

“She’s developing all of these other skills that will help her in life and into adulthood in her future career, and if she plays college volleyball that’s great,” Gayla said. “If she doesn’t, then that’s still great because right now are the building blocks that she is establishing for her future.”