‘It is Peabody’s duty’: Activists say Peabody is not cleaning up mines on Black Mesa 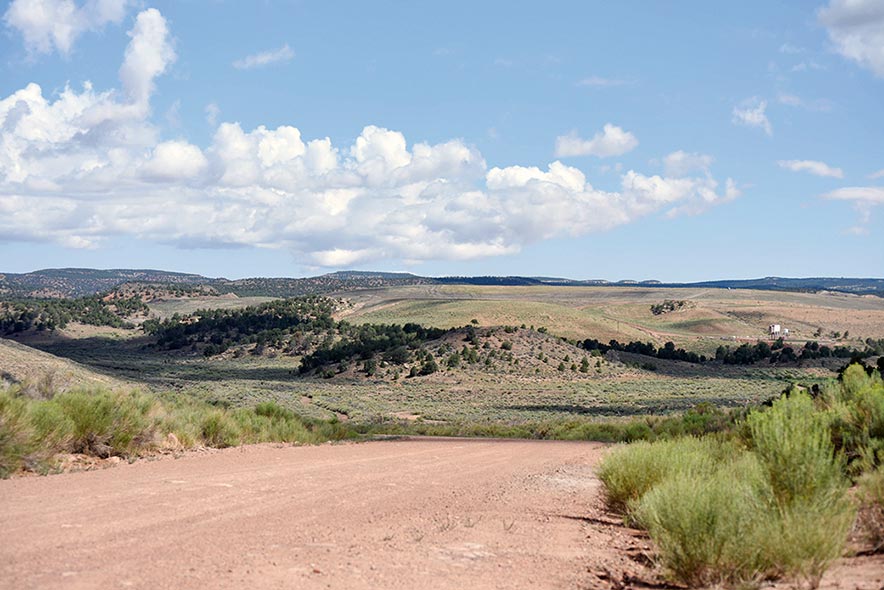 Navajo Times | Krista Allen
A dirt road runs through Kayenta Mine Complex where grass is growing on Dziłyíjiin, on Friday morning. The Kayenta Mine sits idle after closing down on Aug. 26, 2019.

Environmental activists want to ensure Peabody Western Coal Company cleans up harmful environmental impacts at Kayenta Mine, where low sulfur coal was produced and shipped to the Navajo Generating Station for more than four decades.

Activists Nicole Horseherder and Ben Nuvamsa say they have not seen remediation actions since the mine closed in August 2019. Peabody Energy is inching closer to filing for bankruptcy protection, delaying reclamation work.

Nuvamsa said thousands of acres of Navajo and Hopi lands and the water supply have been destroyed by Peabody’s mining since 1970, when the Kayenta operation began on Dziłyíjiin.

“Both mines are now closed after having dug up and damaged more than 20,000 acres of our land,” said Nuvamsa, former chairman for the Hopi Tribe, in a recent meeting with the House Committee on Natural Resources on environmental justice for coal country.

“Lands that our people lived on for centuries, lands that we use for farming, and where we raise our families,” Nuvamsa said. “Now these lands are not suitable for habitation and are now unusable.”

“But (OSMR) today has been completely unhelpful in ensuring that reclamation proceeds in a timely and adequate manner,” Horseherder said. “(It) has allowed Peabody to leave a mess at Black Mesa Mine and has taken no action to move along reclamation work at Kayenta Mine.”

More than three years after emerging from a 2017 bankruptcy restructure that purged $5 million in debt from its balance sheet, Peabody Energy teetered on the edge of another potential default late last year.

But Peabody struck a deal with creditors to give itself more time to pay off significant debt. The deal provides Peabody additional credit as well. The company has given itself until 2024 to redress the balance.

“Operational and productivity improvements continue to take hold across the company,” said Glenn Kellow, former president-CEO of Peabody, who stepped down from his position on June 1. “In addition, we successfully completed our refinancing activities and subsequently repaid a portion of our long-term debt.”

Coal company collapses have become increasingly common in the U.S. With utilities quickly switching to cheap natural gas and renewable sources like wind and solar power, coal companies have been shutting down mines and laying off workers.

“The company came out of its first bankruptcy just four years ago and it barely avoided another one … by cutting a deal to restructure hundreds of millions of dollars in debt,” Horseherder said. “This company is on a fast track toward insolvency.”

This would be disastrous for reclamation, and it would allow Peabody to dictate what reclamation looks like, which is likely cutting corners to save money, said Horseherder.

“It would also limit the ability of our people to participate in the reclamation process,” she added. “Kayenta Mine closed nearly two years ago but OSM(RE) hasn’t lifted a finger to require a significant permit revision.”

“A significant permit revision is critical because it will allow for a comprehensive review of reclamation plans,” Horseherder said.

Groundwater has been used at the Kayenta Mine and Black Mesa complexes since 1968 to support mining and reclamation activities, including transporting pulverized coal through a slurry pipeline at the former Black Mesa Mine, according to the water-use projection report.

The Navajo aquifer is the primary source of groundwater for industrial and municipal users in the 5,400-square-mile Dziłyíjiin area.

Both Diné and Kiis’áanii depend on groundwater from the N aquifer to meet municipal, domestic, livestock, and irrigation needs.

Diné and Kiis’áanii communities pump water from the N aquifer, and to a lesser extent, from the D aquifer.

Both tribes have been concerned about the effects of pumping on long-term water supply, discharge in streams and springs, and quality of groundwater. Annual withdrawals from the N aquifer for industrial and municipal use increased from about 70 acre-feet in 1965 to 7,330 acre-feet in 2005.

Kayenta Mine operations ceased on Aug. 26, 2019, just 84 days before its only customer, the Navajo Generating Station, shut down on Nov. 18, 2019. Mine operations have been idle since then.

Because of the shutdown of the Black Mesa and Kayenta Mine complexes and the start of reclamation activities, Peabody will not be distributing any new areas for coal extraction.

Instead, it will be regrading, top soiling and seeding previously disturbed areas, according to its National Pollutant Discharge Elimination System draft permit fact sheet.

The remaining activities at the mine site will involve reclamation of the mine which is underway over the next five to 10 years.

“Growing up, we had access to water from seeps and springs all over Black Mesa,” said Horseherder, whose family must drive about 40 miles roundtrip to get water at Peabody, Hard Rock, or in Piñon.

“And most of those have dried up and have stopped producing water,” she continued. “In late summer, we have to wait in line for hours to fill up at one of these community wells. OSM(RE) is complicit in helping to cover up mining impact on our water. They do this by playing games with data by using computer modeling instead of real-world water measurements.”

Nuvamsa said his people, the Hopi, are concerned that nothing is being done to repair and rehabilitate both the Navajo and Hopi lands that have been damaged and destroyed for more than half a century of coal mining on Dziłyíjiin.

“The most significant of which is the irreparable damage to our primary water source and the Navajo aquifer and the removal of the remains of our ancestors from their sacred burial sites,” Nuvamsa said.