There are Navajo doctors, lawyers, architects and engineers. Not plenty, certainly, not enough, perhaps, but they are there.

One thing Shannah Smith has yet to meet is a Navajo real estate agent. And that’s too bad, she says, because that may be what’s needed to encourage more Diné to get into home ownership. 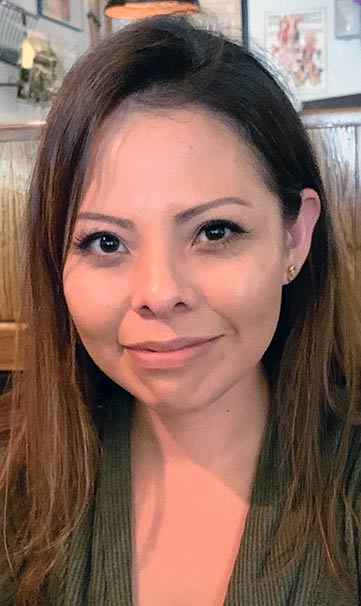 Smith, who does marketing and data entry for RE/MAX in Farmington, has her license but hasn’t activated it yet. “I just think that to be in sales, you have to be almost overconfident,” said the 31-year-old single mom of twin girls. “I haven’t reached that level of confidence yet.” That’s definitely the plan, though.

Smith herself got into real estate sideways, but she’s glad she did. She was one class away from her administrative office assistant certificate at San Juan College when she realized she needed to start bringing some money in. “I thought, ‘Well, I’m not finished, but maybe I can still get a job,’” she recalled. “‘At least I can start looking.’”

She saw an ad for an executive assistant at Keller Williams Realty and applied. The interview was going well when they asked her what she knew about real estate. “Nothing,” she admitted, “but I’m a quick learner.” The company took a chance on her that proved to be well taken. Smith picked up the ins and outs of the business well enough that when her branch spun off its own company, Platinum Real Estate, they brought her with them.

After a few years, she took a better offer at RE/MAX. “At this point in my career, I need to keep moving up every time there’s an opportunity,” she said. “I feel like I’m kind of behind my peers who went for a four-year degree right out of high school.”

For Smith, who was raised in tiny Tsé Alnaozt’i’i, New Mexico, real estate was a whole new world — as she expects it is for most Navajos. “When you’re raised on the reservation, you just think in terms of home-site leases,” she said. “You just hope you inherit something from your parents. It doesn’t occur to you you could go out and get something for yourself.”

Most Navajos, she said, don’t have any homeowner role models, and the process of buying a house is intimidating. “I think the complexity of the process puts people off,” she said. “A house contract can be 20 pages long. It can take 45 days or more between having your offer accepted and closing on the property.”

But, she noted, most Navajos have bought a car. “It’s basically the same process,” she said. “You need to consider what you qualify for, how much you’re going to put down, what the interest is and what your monthly payment will be.”

A good real estate agent is well worth her commission, Smith said. “It’s their job to walk you through the process, to know all the local and national regulations — which keep changing,” she said. “You’re paying them for knowledge you don’t have time to get.”

They’ll also be able to advise you on special programs for first-time homebuyers, veterans, even teachers that can save you thousands of dollars.

Unlike a car, Smith pointed out, a house will almost always appreciate — that means it grows in value over time. “That’s the thing I think most people don’t get,” she said. “Yes, you’re paying a huge chunk of money. It’s probably the most expensive thing you’ll ever buy. But it grows in value. It’s security for your retirement. It’s collateral if you want to take out a loan.”

Of course, if you want to buy a house, it will probably be off the reservation. While Navajo Housing Authority has a few home-ownership properties, they’re far between and not always conveniently located. But just because you buy a home off the rez doesn’t mean you have to live there. “You can rent it out and get some income to help you pay the mortgage,” Smith suggested. “You can flip it. I’ve seen some gorgeous houses that started out very ordinary.”

Since many Navajos have construction skills — “We have to learn that stuff because we can’t afford to hire someone,” Smith laughed — flipping a house is a natural fit. “Right now, prices are down and it’s a great time to snap up an older house that needs a little work,” encouraged Smith, who is Tachíinii born for Hoghan Lani.

She also thinks NHA needs to offer more home ownership opportunities on the Navajo Nation, and couple those neighborhoods with business parks for entrepreneurs. “I go to Shiprock and it makes me sad how few businesses there are,” she said. “Off the reservation, people put up their houses to take out loans to start a business. I think that’s the missing piece in business development (on the reservation).”

So … we assume Smith owns her own home? “That’s the next step,” she said. “Right now I’m working on improving my credit and saving enough for a good down payment.

“And, to tell the truth, it’s kind of nice to rent when you’re working and raising kids,” she said. “The other day the fridge went out and all I had to do was call the landlord.”