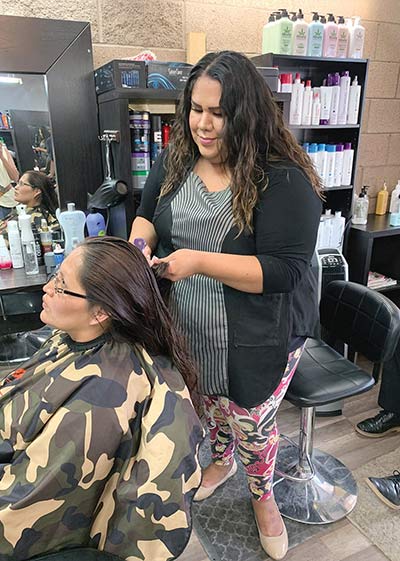 Tionne Tomae cuts Tina George’s hair Friday. The salon is at the far end of “Mutton Alley” at the Ch’ihootso Indian Market Place.

About this time last year, people started noticing that Jonathan Nez, campaigning for president, had grown out his trademark Alfalfa bangs and had a sleek new look. Who knew his stylist was right there on Mutton Alley?

Tionne Tomae, whom Navajo Times readers may remember as the brains behind Glascy Fashions or the makeup artist who held contests for free makeovers, is back, and now she’s got her own hair salon. Tomae said she’s a natural entrepreneur who can’t stay out of business for long, but this time she was down for the count for a while.

The Cornfields, Arizona, native’s star was on the rise in the mid-aughts when we reported on her new line of clothing, Glascy, which she started with her then-fiancé, and their accompanying modeling agency. Glascy had been her first new start after a budding singing career hit the skids when her manager forced her to sing through a bad case of pneumonia, permanently damaging her vocal chords. For a while, Tomae thought she had it all: her own clothing line, a handsome fiancé, a family home in a beautiful red rock cove in Cornfields.

Then it all came crashing down. Again. “I discovered my fiancé had gotten married to someone else,” she said. That would be crushing enough for most women, but then he rubbed salt into the wound. “He wanted me to give up half of my half of the business to his wife,” she recounted. “I said, ‘I don’t roll that way. You can have it all.’”

It was a satisfyingly dramatic exit, but Tomae had no idea what she was going to do next. Then her father died, and she got really sick, and ended up gaining back most of the weight she had painstakingly lost when she had started Glascy. In desperation, she picked up her old cosmetology license and started cutting hair.

“It’s something I used to do when I started out,” she said. “I always liked it.” Tomae started at rock bottom at a discount hair salon in Gallup, where she made $7.95 per haircut. When there was an opening at the little salon at the Window Rock flea market, the Ch’ihootso Indian Market Place, she took it, glad to be back on the reservation and making a fair wage. The little shop next to K’e Infoshop went through several owners, but Tomae had made herself indispensable and stayed through all the turnover.

About seven years ago, she was in Phoenix when she met a cute guy working at a dollar store. Her friends talked her into inviting him out for coffee. “I was surprised,” said the guy, Clarence Flournory, “but we really hit it off.” Eventually Flournory, who it turned out was more than just a dollar store clerk (he was working on degrees in business and criminal justice), followed Tomae to Cornfields. They are now engaged.

Unable to find a job because of Navajo preference (Flournory is African-American), he started sweeping hair off the floor at the salon where Tomae was working. Putting his business classes to work, he discovered ways to improve the bookkeeping and upgrade the shop. Eventually, he was promoted to manager and then talked the owner into selling the business to him and Tomae.

“I’m the American Dream I guess,” said Flournory with a smile. “From sweeping floors to owning a business.” The couple completely redid the little shop’s décor with elaborate touches like chandeliers and crowns. “I want my customers to feel like kings and queens when they walk in here,” explained Tomae. “People tell me, ‘I don’t even feel like I’m on the rez. It’s like being in a city.’” They renamed it from “Michelle’s” to “Tionne’s House of Hair,” but they also do facials, waxing, makeup and sell a complete line of hair products.

Since a lot of people told them they hadn’t realized there was a hair salon on Mutton Alley, they sprang for an old-fashioned barber pole that they spin when they’re open, which is 10 to 6 Monday through Friday and 10 to 5 Saturday. “If you have a hair emergency, you can usually talk me into working on a Sunday,” confided Tomae. Her fame as a stylist is spreading and she recently was invited to do the models’ hair at the Kayenta Fashion Show.

“It was nice being back in the fashion world, where you can do something more dramatic,” she said, showing pictures of the glossy retro up-dos she created for that event.

Tomae has twice been out of luck and money. One thing she has never been out of is ideas. “I’m thinking in so many directions Clarence has to get me back on track sometimes,” she laughed. One thing she would love to do is develop her own hair product line, with Navajo ingredients like herbs and yucca root. She also enjoys fashion photography and plans to do a photo shoot of models whose hair she has styled, then blow them up huge and plaster the walls with them. “You see that at some of the big-name salons,” she said, “but mine would be all Native American models.” (If anyone is interested in modeling, she urged, call her at the salon, 928-309-0900.) Flournory would like to develop some more locations, although he’s not ready to reveal where.

The couple agrees they would like to do more to share their good fortune with the community. They were planning a massive free back-to-school haircut event, but a break-in in February wiped out a lot of their savings and they were forced to scale back. Nez suggested they go to Naomi House, a home for foster kids in Joseph City, Arizona, and give haircuts there. They did that on Sunday, the eve of the first day of school. “They were a major help to us,” said Naomi House Executive Director Genevieve Skidmore. “They were a true blessing. Even the girls who just wanted their ends trimmed got conditioner and were really happy with how they looked.” Plus, “They’re just really nice people.”

That sentiment was echoed by Wendell James, a regular who will go three weeks without a haircut rather than go somewhere else. “Number One, she (Tomae) does a really good job on my hair,” he said. “Number Two, you walk in there and it’s a really friendly atmosphere. Everyone’s very welcoming. If you have trouble using a product she sold you, she’ll sit with you and show you how to use it until you get it.”

Tomae says she’s loyal to her customers because they’re loyal to her. “I’m here because of them,” she said. “I want them to walk out of here feeling really good about themselves. That’s what we’re really selling.”