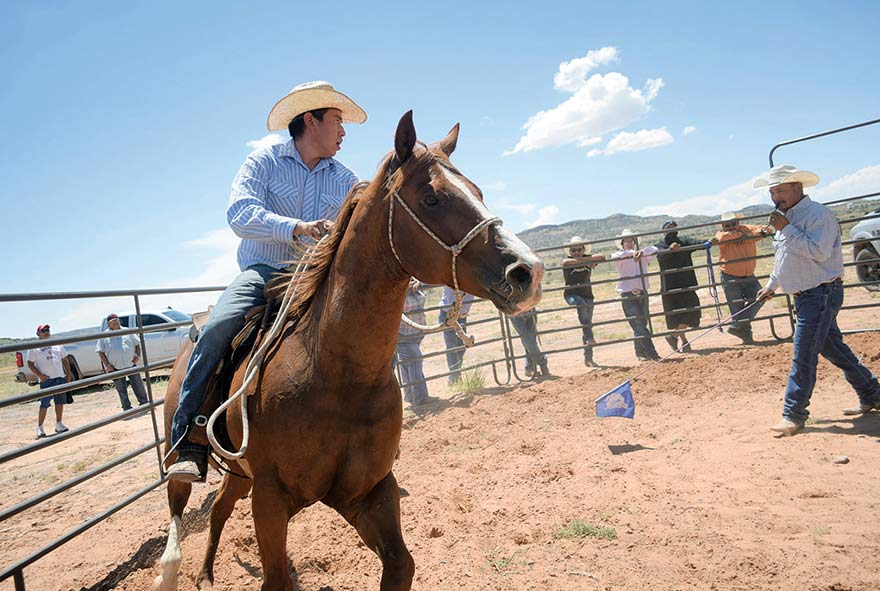 Horsemanship is deeply personal to Tom Chee and something he does not take lightly. “My dad was killed by a horse when I was a little boy,” Chee said. “I grew up in a little bitty hogan with seven brothers and one sister and that tragedy happened through the horse.”

Decades and decades later, he has stayed committed to perfecting the craft of training horses in a safe and meaningful way. “It cost me my dad’s life,” Chee said. “I want to be so darn good at it that it’s safe for other people.”

While horsemanship is important to Chee, it’s just a tool for his work with equine assisted learning. This horsemanship workshop was really about sharing information on healthy relationships in all areas of a person’s life – the relationship with self, with a child, with family and with a romantic partner. “Wash the dishes,” Tom Chee, presenting his workshop, said to the crowd of mostly young men. “Your wife, your girlfriend are not your mother. Pick up after yourselves.”

This is just one of the many messages Chee intertwined during his presentation on how to train new horses at the Southwest Navajo Fair and Rodeo in Dilkon, Arizona, last Friday. “The horse is the medium for teaching concepts, like this morning talking about relationships,” he said. “It hinges on you and how you relate to the horse.”

Chee, a former Council delegate, doesn’t train new horses “John Wayne style,” as he calls it. He is very gentle, kind and intuitive to his horses. The relationship he builds with horses is about mutual respect. “I’m not forcing myself on the horse,” he said. “I’m creating opportunities for him to adjust to my expectations and then you actually form a partnership to meet the expectation.” This is also part of his teachings to parents. Chee told the crowd to have expectations for their children and to not give in to their demands because they will rise to their parents’ expectations.

The expectation he had for his children was to get an education and be able to provide for themselves. “I told them, ‘You want to be a sheepherder? Be the best sheepherder with a degree in your pocket,’” Chee said. Today, all of Chee’s children are college educated and employed. His relationship with his children is built on mutual respect and this translates back to horsemanship. The mutual respect creates a safe path to training a new horse. “The end result is to ride a horse without bucking, without scaring them, without hurting them,” he said. “We got that done this morning.”

This is why Chee uses horses as a way to educate people. “The best teacher in here wasn’t me, wasn’t those boys, it was the horse,” Chee said. “What the people learn today, the shift of the paradigm, the way they see the world, can be changed by the way they interact with the horse, listening to the horse.”

This intentional paradigm shift through horsemanship workshops is the reason the Methanphetamine and Suicide Prevention Intiative at Winslow Indian Health Care Center partnered with Chee. “With the health promotion program, we see that our numbers are really low with men and young men,” Louanna Benslow, the project assistant for the program, said. “So, what we’ve noticed is that a lot more of those participants come in to participate and get the information,” she said. “The other events we do have the same information but we’re not getting attendance from those target audiences, especially the young men.”

Most of the participants at the Dilkon workshop were young men. So, the outreach seems to be effective.

The next one will be scheduled in September.