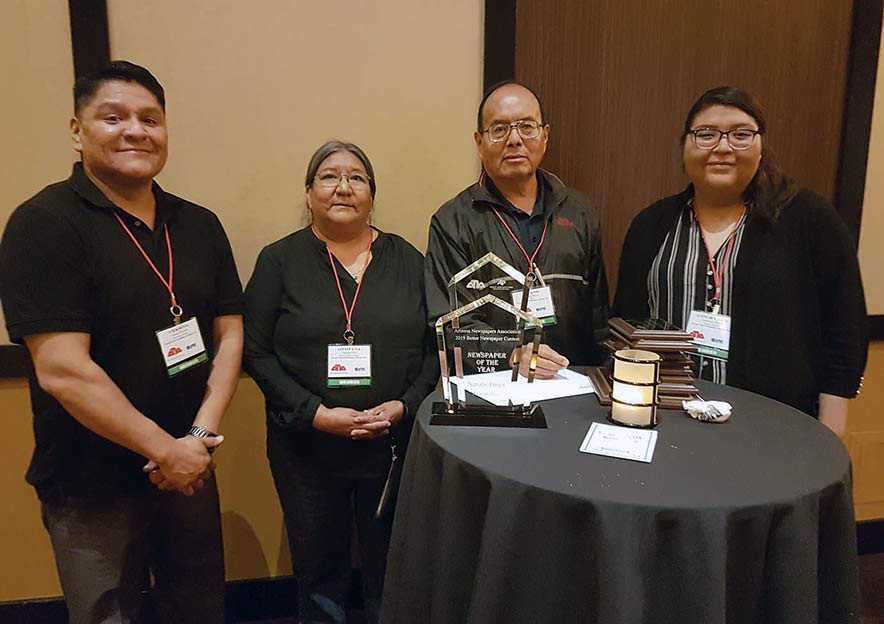 For the fourth year in a row, the Navajo Times was named “Newspaper of the Year” in the non-daily category by the Arizona Newspapers Association.

Forty-eight newspapers in both the daily and non-daily categories entered this year’s contest, with Sierra Vista’s tiny Herald/Review upsetting the flagship Arizona Republic in the daily category.

To achieve the top award, newspapers must rack up points in both the ANA’s Better Newspaper Contest and Excellence in Advertising competition.

The Times won General Excellence in both contests, in addition to 10 advertising awards and 19 editorial awards, placing in nearly every category.

Your Diné bi Naaltsoos gathered top titles in editorial page excellence, use of photography, and community service/journalistic achievement for its thorough coverage of the 2018 tribal election.

The Times’ website, designed and maintained by Ben Winton of Phoenix, also topped its category.

Other staff-wide awards included a second in reporting and newswriting excellence and thirds in departmental news and special sections (fair and Gallup Ceremonial tabs).

She also racked up seconds in both color and black-and-white paid ad series as well as best use of small space, and thirds in black-and-white, static and animated online ads and pro bono ads.

“She must do a great job, because people comment on our ads all the time,” said Joe Gallegos of the Hampton Inn, whose ad won Notah a second in black-and-white ad series. “She’s very creative and detail-oriented. And she’s great to work with.”

“My fellow coworkers in the advertising department have taught me so much and have been tremendous mentors throughout my graphic design career,” she said. “The awards I’ve received are a reflection of their efforts and I am so honored to be a part of such a talented team. I am also grateful to be recognized for my work, and plan on continuing to grow within this field.”

On the editorial side, Pauly Denetclaw had the winning commentary or analysis column with her exposé of racism at the Journalism and Women Symposium.

While she’s happy with her first-place plaque, Denetclaw says it’s more gratifying that the column “started a conversation” among professional organizations about becoming more diverse and inclusive.

“Since I wrote the column, I’ve heard various membership organizations talking about what happened,” Denetclaw said. “People in the journalism association world are very aware of what happened at JAWS and are taking steps to avoid making the same mistakes.”

“At first I was like, ‘Am I overreacting?’” she said. “Then I talked to other women journalists of color, and they were like, ‘Oh yeah, there’s always been racism at JAWS.’”

The Times did particularly well in column-writing this year, with Central Agency reporter Cindy Yurth winning a second in feature column for her eulogy to Blackhat Humane Society president Chris Cape and publisher Tom Arviso Jr. taking home a third in commentary or analysis for his column titled “Yes, your vote does count!”

Second place certificates went to Quintero for his news story on Karis Begaye’s DUI charge and Yurth in investigative reporting for her uncovering of previous deals between tribes and bankrupt gun companies brokered by now-Navajo Nation Controller Pearline Kirk.

Production Manager Bobby Martin and assistant manager Olson Patterson rounded out the awards, picking up a third in page design.

“These awards show that our staff is one of the hardest working and best teams of journalists working in the state of Arizona,” said Navajo Times Editor Duane Beyal. “I was most impressed by the respect shown to the Navajo Times by other newspapers and the ANA staff. It was an honor to represent the Navajo people at the awards ceremony. And we brought back the top honor – Newspaper of the Year!”

Added Arviso, “I offer my sincere compliments and gratitude to the staff and carriers of the Navajo Times. This award is one that is shared by all of us. The journalism industry is going through some tough times these days but I know in my heart that newspapers — especially newspapers like ours — are what towns and communities all across the country need and want to keep them informed of local news and activities.

“Our work as journalists is important in many ways and we will be here for many years to come producing an award-winning publication. We appreciate the support of our readers and advertisers and I am really proud and happy for our Navajo Times team.”