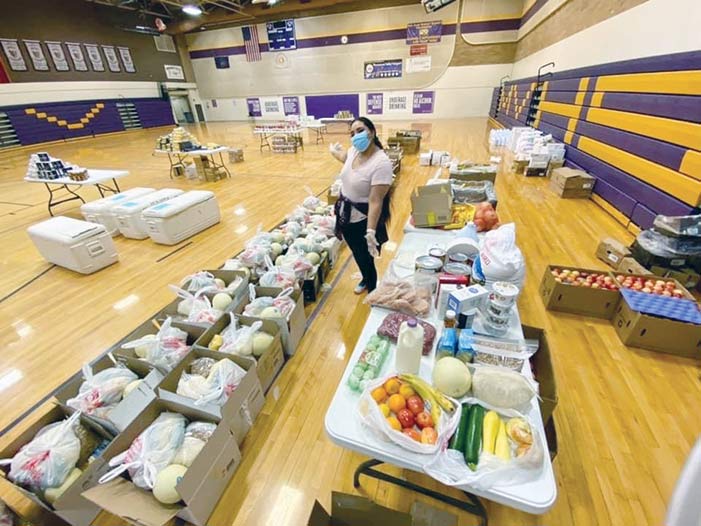 What might have been a great collaboration between two groups serving the Navajo people during the pandemic has sadly turned into a political feud, said Ethel Branch, former Navajo Nation attorney general and founder of the Navajo & Hopi Families COVID-19 Relief Fund.

“I do think that unfortunately what we’re doing is viewed as competition to what the administration is doing,” said Branch. “It really shouldn’t be that way.”

With the Nation’s Health Command Operation Center being overwhelmed with requests for relief aid and now compromised by COVID-19 exposure, one would think the Navajo Nation government would be bending over backward to cut bureaucratic red tape for relief groups like NHFRF that have been on the ground providing assistance to those in need and augmenting the Nation’s services. Instead, the powers that be have imposed hardship and exhibited a lack of cooperation, said Branch.

“There was not an effort to integrate our systems early on,” said Branch. “Had there been, perhaps it would have been easier for us to work together.”

Current Navajo Nation Attorney General Doreen McPaul, who spearheads a group out of the Department of Justice that is handling receipt of donations to the Navajo Nation’s official Navajo COVID-19 Relief Fund, disagrees. She says that the Nation has made several attempts to coordinate with NHFRF. However, she says that the NHFRF has not been forthcoming with information and suggested their demands have been unreasonable, beginning with a request from Branch to waive the Nation’s emergency curfews for her volunteers to be able to deliver essentials in the evenings and over the weekends.

That request was denied by President Jonathan Nez who stated that no curfew waivers were being granted, especially in the wake of an uproar over a waiver for a church gathering in Ganado in early April. “This should be a win-win,” said Branch. “We’re doing humanitarian work. We’re being safe. We’re not presenting an additional risk so we thought the waiver would be an easy ‘yes.’”

McPaul said Branch has mischaracterized Nez’s response, meant to uphold the mission of mitigating the spread of the virus and encouraging people to stay home. She went so far as to say Branch has been misleading the public on social media to advance her cause.

Meanwhile, Branch says McPaul has family members and friends on social media who have been trying to cast a cloud of doubt over the NHFRF efforts, which have otherwise garnered international accolades, good will and media attention. Since launching its GoFundMe page on March 16, the grassroots NHFRF, run by an dedicated group of volunteers, has raised more than $4.5 million and has served more than 7,500 household at 81 chapters and six Hopi villages.

Branch said the Nation not approving the curfew waiver created hardship for her team and has jeopardized timely deliveries of essential items, including perishable foods, to those in need.

There have been several occasions when her volunteers, who often drive long distances to make deliveries to vulnerable people in rural areas, have had to camp out on the side of the road due to the curfew cutoff, she said.

Branch said it was particularly difficult to work around the weekend curfews, especially when the NHFRF’s bulk deliveries arrive late in the week. She said it takes several days to receive, sterilize, and package essentials for distribution. Two days of every week lost to curfew has slowed down the pace of their work unnecessarily, she says.

McPaul explained that the Nation’s emergency response team is coordinating with every other group that wants to do work on the Nation in adherence with the Nation’s public health and emergency orders. “It doesn’t mean we’re controlling them,” said McPaul. “We’re just plugging them into a system that’s already working so that there’s no duplication of efforts or risk of spreading the disease.”

McPaul also suggested Branch’s proposal to the Navajo Health Command Operation Center for the NHFRF to have a say in how the Nation spends $600 million of CARES Act funding and to receive one third of all monetary donations to the Nation’s relief fund is overreach.

Branch says those recommendations, made among a list of others, are meant to be a starting point in negotiating mutually agreeable terms for a good working relationship and to ensure that some of the Nation’s monetary donations were going to immediate direct relief. Branch said she believed consolidating some of the resources of the government and non-government organizations could offer efficiencies to better serve the people.

“I had hoped that we could combine those resources because I know as a government it’s difficult to move quickly, especially when it comes to spending money, whereas with an NGO you can do that quickly,” she said. The NHFRF is a nonprofit under Utah law with the Rural Utah Project Education Fund as its fiscal sponsor, said Branch.

Now a clash has emerged over the Nation’s concern about relief groups referencing the Navajo Nation in their online fundraising efforts. McPaul said the Department of Justice secured an outside intellectual property attorney that worked directly with GoFundMe’s legal counsel to send a communication to several “GFM customers,” including the Navajo & Hopi Families COVID-19 Relief Fund. “I am aware, generally, that the content of the request was to not use the Navajo Nation seal, to replace ‘Navajo Nation’ with a more descriptive term such as ‘Navajo people’ or ‘Navajo community,’ and to include a disclaimer so that it is clear to potential donors that the campaign is not endorsed by or associated with the Navajo Nation,” said McPaul.

McPaul said this effort was not intended to single out the NHFRF, but to distinguish all other relief groups from the official Navajo Nation COVID-19 Relief Fund that her office oversees.

“We’ve had to send letters to say ‘You’re using the Navajo Nation’s protected copyrighted material,’” said McPaul. “You need to either change your name or do a disclaimer to clarify that is not an effort that is affiliated with the Navajo Nation.”

McPaul clarified that they have not specifically asked anyone to take “Navajo” out of their relief fund name. Branch confirmed that NHFRF received an email from GoFundMe, but says she is still unclear what the Nation is aiming for. “I’m so confused because we never say that we are the Navajo Nation,” said Branch.

The author of the email asks for permission to add a disclaimer to the NHFRF GoFundMe page to explain that the NHFRF is not the official Navajo Nation fundraising campaign and provide a link to the Navajo Nation COVID-19 Relief Fund. Branch noted that early on the Navajo relief fund that McPaul oversees did not have a GoFundMe account, but they recently started one.

“It wasn’t until the Irish giving phenomenon where we got all of that media attention when they formed a GoFundMe account, which was very confusing to us because they formed it almost immediately after we had that discussion on how do we work together,” said Branch.

“Now they are directly competing with us.” Branch has retained an intellectual property attorney to try to clarify what the Nation’s position is and to come up with a formal agreement, if need be.

She doesn’t think there is an issue with the NHFRF’s name or the copyright, regardless. “We’re not in any way pretending to be the government,” said Branch. “We’re not trying to mislead people. Just to avoid any confusion, we were very clear that this relates to families and not to government.”

Branch says if there were ever a moment to put aside differences and work together, that time is now. “There is no time to waste,” she said. “There are lives being lost every day. We need to work together to stop that from happening.”

McPaul said her group is also just trying to coordinate and help the communities. “I think we have a common goal and that’s what I’m trying to focus on,” she said. “We do want to work with this organization.” Branch says she hopes the AG keeps in mind that she is not the president’s attorney.

“The attorney general is not supposed to be acting with political motives,” she said. “They serve the Navajo Nation as a whole.” Added Branch, “I’m still hopeful that people can rise above whatever is preventing us from working together so that we can do what’s right for the Navajo people.”