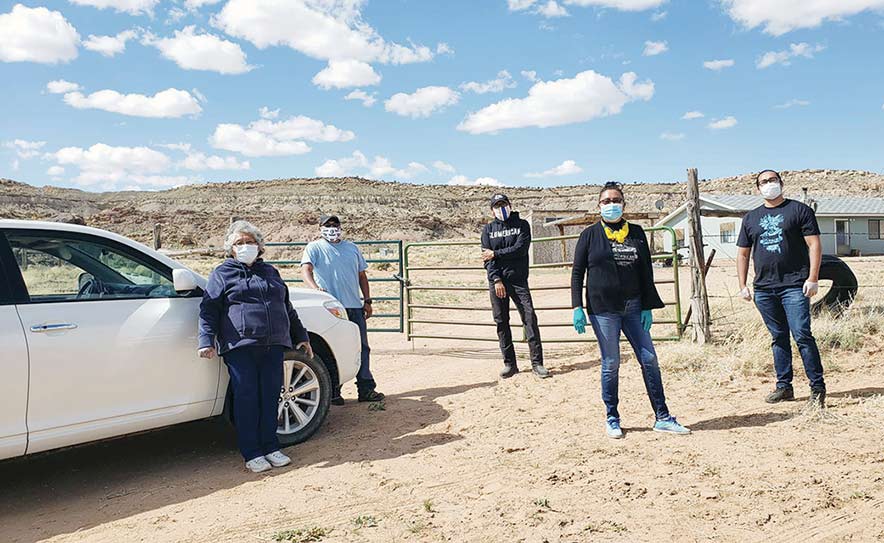 He told her, “Mom, you worry too much.” “It’s my job, as your mom, to worry,” she responded. “If the Navajo Nation president isn’t going to help, then he shouldn’t be our president.” “Don’t worry mom, I’ll be safe,” he said and then went to sleep to do it all over again in a few hours.

Pete Sands, 37, since March has been sharing acts of generosity and resilience, helping Utah Navajo communities, and even sharing stories with elders and those socially isolated during the coronavirus pandemic.

Fear about health emergencies like the coronavirus can bring out the worst in people, but they can also provide inspiring examples of people choosing to be kind. Sands, a Diné singer-songwriter, musician, filmmaker and actor, is one of the many people across the Navajo Nation who have stepped up to help during an extraordinarily difficult time, making sure those who are staying at home or in quarantine don’t feel alone.

But he’s not doing it alone. “I’ve never done anything like this before,” Sands said. “It was a rough start. Now, we’re (moving) along pretty good. It’s not a huge operation, but we’re doing the best we can on this side of the (Navajo Nation) to try to curb the coronavirus.”

“(The health system) allocated money to me to buy supplies and groceries for people in the community and for elders,” Sands explained. “For the firewood, same way, we get it from donations. Some of it comes from my own pocket but most comes from donations. “(The health system) is really spearheading everything,” he said. “I’m just thankful for that. I really respect them because they really do believe in community … and that’s an organization I’m very proud to be part of.”

Every morning Sands and his team of volunteers prepare for the day starting at 6 a.m. They have a list of things to do every day, such as early-morning grocery shopping to look for the limited supply of Spam and vegetables and plan another trip to get more firewood. The weary team gets home around 10 p.m. every night.

And grocery store employees have been helpful, said Sands. “Because I go in there and I tell them I work for the UNHS and they really try to work with me and they’ll say, ‘We’ll give you a little bit more since you’re helping the community,’ in that sense,” he explained. “We try to be sensible as well and try to keep on the healthy side,” he said. “Instead of buying a whole bunch of chips, buy apples and fruits, something that’s healthy, than just the junk food people eat. Some people don’t like that, but most are appreciative.”

In recent weeks, many cities, towns and rural communities around the world, including Diné Bikéyah, have imposed travel restrictions to help curb the spread of the coronavirus.

Closures and suspension of all incoming and outgoing traffic at the Navajo Nation borders are just some of the measures to help contain the spread of COVID-19. Sands said he’s trying to help flatten the curve, but he’s also risking his own life when he has to make a grocery store trip. “We’re basically trying to keep people from going to town,” he said.

“With all the roadblocks and everything that’s happening, I think it’s safer for people to stay home. “We opened our doors yesterday and all of our food was gone within an hour,” he said. “It’s something that I knew was needed and I am so glad people are pitching in whatever they can.”

Sands said his operation’s focus helps the most vulnerable first – elders, many of whom cannot go to town or don’t have vehicles to do so. “Most of the time by myself because we don’t want to risk any type of exposure to the elderly,” said Sands, who’s fluent in Diné Bizaad. “So, most of the time it’s just by myself delivering firewood and supplies and they’re happy. They’re just so happy because they live out in the middle of nowhere. “It’s secluded and not many people visit them,” he said. “So, when I come by, they sit down and I talk with them – just really explain what the coronavirus is and why they have to stay home.”

Sands said he’s met and talked to dozens of individuals, including the 103-year-old Navajo Code Talker John Kinsel Sr. “He calls me ‘Tall Man,’” Sands said about Kinsel. “Carhartt and Wranglers (are) his style. Smiling and telling stories each time I see him.

“I’ve visited him twice with a truckload of firewood each time,” he said. “No thanks needed, we owe it to you, my friend. You are a living legend.”