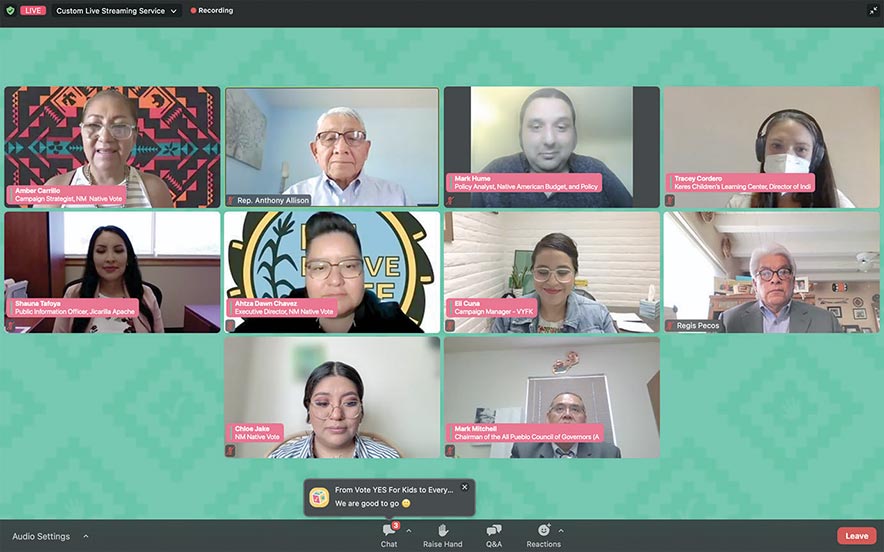 There will be a question on the ballot on Nov. 8 that New Mexicans will have the chance to vote on after years of struggle.

This is a state constitutional amendment that will mean funding for early childhood education and care and additional funds for public schools.

The money will come from the state’s Permanent Land Grant Education Fund.

At least a decade in the making, this amendment for early childhood funding took State Rep. Moe Maestas five years of fighting through the state senate to get passed, with fellow co-sponsor Albuquerque Democrat Rep. Javier Martínez, according to the Santa Fe New Mexican.

Voting yes for this amendment is important to Native education. In coordination with the Vote Yes for Kids New Mexico campaign, the New Mexico Native Vote organization presented tribal leaders and education advocates in a virtual press conference on Friday, July 8.

Allison supports the amendment and said, first of all, it would mean that every early childhood teacher will be paid a starting wage of $18 per hour, and that will mean better retention of teachers.

He said it will pay for valuable professional training for teachers, and third, will create thousands of additional child care jobs.

Fourth, Allison said, it will “create an affordable high-quality education and care for every family of young children that wants it from the provider they prefer.”

Allison said, “It also will create career technical education and job training programs at our high schools. I interpret that to mean, not everybody wants to really go to college for their four-year degrees. A lot of us, we like to work with our hands.

“So, there is always going to be a need for mechanics, or carpenters, or electricians,” he said. “I am a journeyman electrician by trade.”

Allison said he would like to see the funds create more technical education and job training programs for high schools, and supply all classrooms with internet service.

Chairman Mitchell said that he supports the ballot because it will mean more money to adequately fund the Indian Education Act, that requires the state to provide culturally appropriate education and language in response to the Yazzie-Martinez lawsuit.

In 2018, the lawsuit successfully challenged the state’s failure to provide students – especially low-income, Native American, English language learners, and students with disabilities – with programs and services necessary for them to learn, as explained by the decision’s summary.

Four years ago, Judge Sarah Singleton ruled that “all New Mexico students have a right to be college and career ready and that the state is failing to meet this obligation.”

As evidence, the judge pointed to New Mexico’s low graduation rate—70%, the lowest in the nation – low proficiency rates in reading and math – 70% of New Mexico students cannot read or do math at grade level – and high rates of college remediation – almost 50% who do attend college need remedial courses.

In her ruling, Singleton said, “The state has failed to comply with state and federal laws regarding the education of Native American and English language learner students, including the New Mexico Indian Education Act, Bilingual Multicultural Education Act, and the Hispanic Education Act, which has resulted in an inadequate education system for New Mexican students.”

If the amendment passes on November, adequate funds would be available to help remedy this.

“The amendment would recognize that education begins at birth and allocate about $125 million from the state’s Land Grant Permanent Education Fund every year to the Early Childhood Education and Care Department and about $75 million to the Public Education Department,” she said.

“The fund has continued to grow at a very high rate,” she said. “When the campaign to pass a constitutional amendment started over 10 years ago, the fund had $10 billion in it. Today it has over $24 billion.”

Mitchell pointed out that the money in the Permanent Education Fund comes from “revenues from leasing and royalties produced by nonrenewable resources in New Mexico, and income from returns on investment capital.

“While we support the fund and education,” he said, “we must bring attention to the fact that the land from which all the beneficiaries monitor is ancestral lands of indigenous people.

“Well, we support the fund and education we must bring attention to the fact that the land from which all the beneficiary monitor is ancestral lands of indigenous people,” he said.

“In this precious land, in particular, our Pueblo handprint covers the entire state, the region of the Southwest,” he said. “There is an equity and adjustment issues, justice issues here that we must not only be aware of, but act upon creating an education system to ensure our Native people are civically ready, not only for the Western society, but in their communities as well.

“We are a nonprofit independent language revitalization school that uses the Montessori pedagogy to reclaim the education of our children,” she said.

This model could be considered under the new initiative to improve early childhood education. The Montessori method has been incorporated into at least one public school in Albuquerque that is very popular.

In brief, according to various Montessori school websites, the approach is described as “based on the child’s developmental needs for freedom within limits, as well as, a carefully prepared environment which guarantees exposure to materials and experiences.

“Through this, the child develops intelligence as well as physical and psychological abilities,” the sites said.

The goals include “developing a positive attitude towards school!”

Cordero said, “It’s a model of education that best allows our own heritage and language of Keres to exist naturally” in the school setting.

Allowing children to be themselves

She said that with this program “it allows our children to fully be themselves” and no longer asks them to choose between being a good student and being a strong Native person, but makes it possible for them to do both.

“It’s the idea, and the implementation, that our Cochiti way of life is an asset, is a strength alongside Western academics,” she said.

Cordero said state leaders need to be open to funding programs like theirs, which currently is a nonprofit that relies on fund-raising.

The next speaker, Lana Garcia, Jemez, of the Walatowa Head Start Language Immersion Program, said in the past, the Head Start program only emphasized learning to read and write in English, but her program now has language immersion.

At this date, the New Mexico Public Education Department is getting community recommendations of what they think the schools need in their programs.

It is led by Secretary Elizabeth Groginsky and Assistant Secretary for Native American Early Childhood Education and Care Jovanna Archuleta, of Nambe Pueblo, who serves as the nation’s first high level official in that area.

The University of New Mexico Native American Budget and Policy Institute prepared a needs assessment for the department. Findings from their report include improvement of infrastructure, support for the integration of education and health systems, and allowing tribes to implement programming and curriculum without state or federal interference.

Several participants noted that structural racism assumes that acquisition of English has greater advantages than early learning in Native languages.

The study also identified low wages and benefits as a major obstacle to recruitment and retention of quality professionals.

Hopefully, the state constitutional amendment will be passed by the voters in November, and additional funds will mean improvement in outcomes for all New Mexico children.