Because the iron-working industry has an array of dangers, Craig Young’s fellow ironworkers encouraged him to go back to school.

“Go back to school. This is what’s going to happen,” one ironworker said to Young as they talked about musculoskeletal pain.

“It’s good money, but it’s very dangerous,” they said to him. 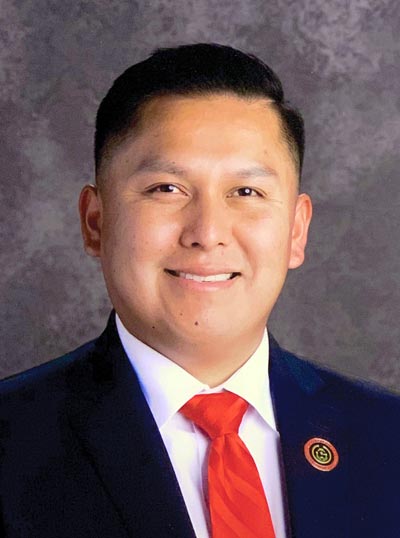 Courtesy photo | Craig Young
Craig Young, 34, from Tséch’ízhí, Ariz., was nominated recently for the Presidential Awards for Excellence in Mathematics and Science Teaching, the nation’s highest honor for STEM and computer science teachers.

Young, from Tséch’ízhí, Arizona, didn’t listen and joined the Marines instead. After serving eight years, he returned home to Diné Bikéyah.

He enrolled at Diné College in Tsééhílį́, where Diné mathematician Henry Fowler inspired and planted seeds for him to become a math teacher.

“He (Fowler) said our kids need Indigenous educators who understand them, who know them because they are them,” Young said. “I didn’t plan on becoming a teacher. Teaching found me.”

Young is a Monument Valley High alumnus. He’s earned a bachelor’s in elementary education from Diné College and a master’s in mathematics from Northern Arizona University.

Now 34, he’s working simultaneously as a STEM educator/ethno-mathematician/after-school program staffer at Tuba City Boarding School. He maintains a family and is working on a doctorate in leadership at Fielding Graduate University.

Young was nominated recently for the Presidential Awards for Excellence in Mathematics and Science Teaching, the nation’s highest honor for STEM and computer science teachers.

The U.S. government bestows the presidential award. Congress established the award in 1983 and the president may recognize up to 108 exemplary teachers each year, according to the award’s website.

The awards are given to STEM and computer science teachers from the 50 states, Commonwealth of Puerto Rico, Department of Defense Education Activity schools and U.S. territories.

The awards recognize teachers who have deep content knowledge of the subjects they teach and can motivate and enable students to succeed in those areas.

“Lo and behold, we have an Indigenous educator from the Navajo Nation who was nominated,” Young said. “It’s pretty awesome.

“I’ll be competing against other educators across the (country), and hopefully, I’ll be one of the 108 that gets invited to the White House,” he said.

The award’s application comprises three sections: administrative, narrative, and video. After eligibility is confirmed and technical specifications are met, each applicant is evaluated using five dimensions of outstanding teaching.

Each presidential awardee will receive a certificate signed by the president, a $10,000 award from NSF, and an all-expenses-paid trip for an award ceremony in Washington, D.C.

“For me, it’s a huge honor, and I didn’t know something like this existed,” Young said. “I do everything for students. I don’t really talk about my accomplishments, but it’s really nice seeing my works before itself by non-Indigenous people out there in the world.”

Craig Young is one of the many Diné STEM instructors leading by sharing with young Diné students how STEM concepts apply to their work every day.

“I have a lot of STEM programs that I do,” said Young, who runs TCBS’s Thunderbird Robotics Team.

Young’s team last year led the state in robotics. Because of the coronavirus pandemic, the team didn’t compete nor return to the classroom.

“We lost on that opportunity, but we still kept going with robotics,” Young explained. “We did everything virtually, and this year, we’re in a hybrid model.”

The robotics team has competed in numerous competitions, including the “Worlds and Icy Worlds” sponsored by NASA.

Among the many programs and science events he runs throughout the school year, the 21st-century after-school mentorship called “Warriors of Hope” stands out, said Young.

Warriors of Hope is character development for boys who get into trouble in school for many reasons, such as not having a father figure in their lives.

Outside of his classroom, Young is part of the Alliance of Indigenous Math Circles, a spin-off from the Navajo Nation Math Circles, bringing high-quality mathematical outreach to Diné students and teachers.

The math circle partners with over 40 mathematicians – like Tatiana Shubin of San Jose State University – across the U.S. to develop mathematics and mathematicians.

Young said while the Navajo math circle focuses only on Diné, it also reaches out to Kiis’áanii and other Native communities.

“What I want them to do is establish a mathematical community among students, educators, and community members for our kids,” Young said. “Our hope (at the circle) is to inspire students to pursue STEM careers.”

Young said he’s run a few math camps across the Nation – one in Sheep Springs, New Mexico, and one in Tuba City, where he partnered with NAU’s Mansel Nelson, director for the Institute for Tribal Environmental Professionals.

To get involved in The Alliance of Indigenous Math Circles, it will host a math circles event from 5 p.m. to 6 p.m. on Jan. 24. Young said math circles are free, and those interested may visit aimathcircles.org

Integrating Diné culture and traditions into math is what Young does.

“The materials that we use in school, it’s designed for the general population,” he said. “A lot of our Indigenous students, we’re forgotten, and when we do the mathematics, we don’t relate to that.

“We (Natives) don’t understand. We don’t see ourselves in mathematics,” he said. “What I teach, I call it, ‘ethnomathematics.’

“So, when I teach, I’m also teaching Navajo culture with mathematics,” he said. “And when our kids see that, they see themselves in mathematics. We rehumanize mathematics.”

Young said his mission is to rehumanize mathematics for Native students and see themselves while preparing for advanced STEM disciplines and valuable careers in STEM fields.

“What I want them (young Native students) to be is … fluent in mathematics,” he said. “I want them to leave high school prepared at that college algebra level.”

Young wasn’t always a math person. Growing up, he had an aversion to the subject but his behavior changed when he knew he had to learn it.

“I couldn’t relate to mathematics,” he said. “I honestly didn’t like math.”

He wasn’t always a full-time student too, and that behavior changed.

“I went to college (after high school), and I thought it wasn’t for me,” Young said. “I went to the work-force office and (it) sent me to Chicago to attend a trade school for ironworking.

“I finished and got my trade certificate,” he said. “I stayed there for a bit as an ironworker – specifically a connector – (and then) I came home.”

“A lot of those older guys (ironworkers), they’re losing cartilage in their fingers,” he said. “We tie rebar and (do) rod-busting. They told me, ‘Go back to school.’

“So, I entered the military,” he added. “I did my time there, got out, and like a lot of veterans, (I asked myself), ‘What do I do next? What is life like after the military?’ I found myself at Diné College.”

Young proved that math intelligence could be nurtured, enhanced, and developed through a growth mindset with determination and persistence.

“I started getting better at mathematics,” Young said. “I practiced on my own in my own time, and I graduated from Diné College, from a teacher education program. I’m a product, and I say it proudly.”