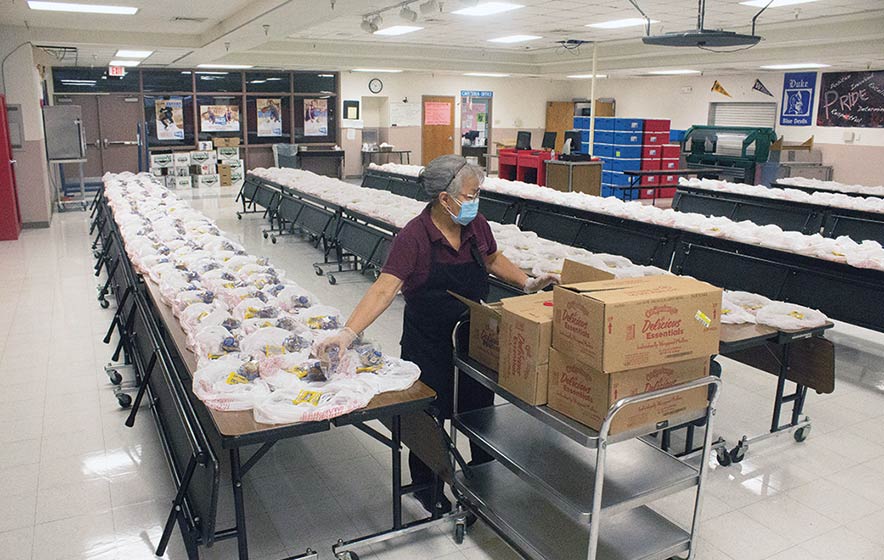 At 7 a.m., Oliver Begay pulls his school bus to the curb on 9th Street behind Page Middle School. Begay and a helper, Thomas Hall, load a half dozen of the blue and red coolers onto their bus and leave, according to a Page school district news release.

The coolers are loaded with meals destined for Page Unified School District students who live outside of Page. Begay’s bus route takes him south out of Page on Highway 89. The bus leaves Manson Mesa and climbs onto Coppermine Mesa, then rises again as the yellow bus passes through The Cut and drops down into Bitter Springs.

Begay’s first stop of the day is at Cedar Ridge, a small pullout at Milepost 505. He’s scheduled to be there at 7:45 a.m. He arrives at the stop a couple of minutes early and finds a family is awaiting his arrival. A man comes to the bus and Hall hands him six meals – three breakfasts and three lunches for three students.

Any person picking up the meals must show the bus driver the student IDs of the kids for whom they are picking up meals. “We have a list of the people who will be picking up meals from us,” Begay said. Begay has worked as a bus driver for the school district for five years, driving Route 15, which has stops in the Bittersprings and Cedar Ridge areas. Begay lives in Bittersprings and keeps the school bus parked at his house.

On a normal year, he leaves his house at 5:55 a.m., and picks up his first group of students a few minutes later at Milepost 510 on Highway 89. From there he makes his way north, toward Page, picking up students at a half dozen locations. He makes his final pickup at 6:40 a.m., then drives up the hill, through The Cut, and drops the students off at their schools in Page. But now Begay is driving his route in reverse, so to speak. He starts his route at the middle school, where he picks up his daily food delivery, and takes it to the Bittersprings area.

He has eight stops on his route and on a typical day delivers 60 meals. It takes him the majority of the morning to complete his route and return to Page. Because Begay drops off the meals in the morning, when students are attending virtual classes via Google, parents or guardians pick up the meals. Begay is one of seven bus drivers delivering food to PUSD students this year.

Geographically, the Page Unified School District is one of the largest in the U.S., encompassing more than 1,800 square miles, the majority of which includes the Navajo Reservation. Getting meals to far-flung students, some of who live as far as 80 miles away from Page, is no small task. The bus drivers deliver food to students in Bittersprings, Kaibeto, LeChee, Coppermine and Inscription House, Arizona.

Hall, who helps Begay deliver the meals, has worked for the school district for several years as one of its crossing guards. But with students attending classes virtually this year, the district has no need for crossing guards. PUSD’s Food Services has 11 employees who make the meals. Lena Brown, Wynona Brown and Megan Williams arrive at the Page Middle School kitchen at 6:30 a.m. to start preparing the meals.

One meal crew makes the entrees, which may be sandwiches one day or burrito bowls the next. Another crew washes, prepares and packages all the fresh fruit. When all the meals are prepared and packaged they’re put into coolers and loaded onto the buses. PUSD’s Food Services delivers about 300 meals every day, Monday through Friday.

They deliver the food on seven routes, most of which go onto the Navajo Reservation. In addition to the routes that go out to the Nation, Food Services also delivers meals to Tse Yaato, PUSD’s special education students and the students that attend Onsite Support Services. Since classes resumed on Aug. 10, Food Services has prepared and delivered 8,900 meals.

“I feel like things are running pretty smoothly,” said Food Services Director Art Marquez. “We got pretty good at this at the end of last year, and this year we just had to make a few minor tweaks to get it going again.”