‘So many helped me get here’: Chinle principal surprised with $25,000 Milken Educator Award 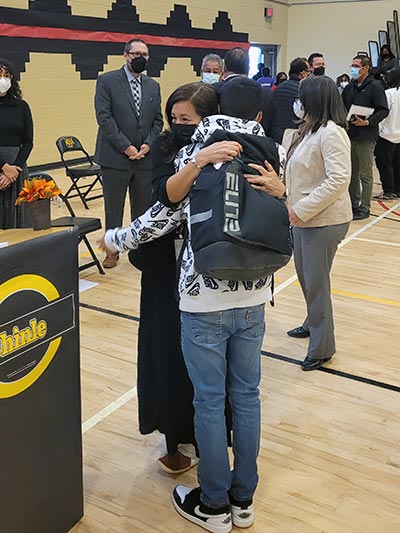 Martin thought the superintendent was making a surprise visit to the Nation, but little did she know the assembly was for her.

In front of the school’s student body, she was presented with the Milken Educator Award, a national honor reserved for the best teachers in the nation, as well as a cash prize of $25,000.

“I feel like I’m in a dream,” Martin said. “People always say that when things happen but it really does feel like a dream.

“I’m worried that I’m not thanking everyone that I should because I know so many people helped me get here,” she said. “I feel very humbled and very dreamlike.”

The Milken award was created by the Milken Family Foundation in 1987, designed to provide public recognition and individual financial awards for teachers, principals and specialists from across the country who are dedicated to excellence in education.

Martin will also be a part of the Milken Educators Network group, consisting of the other 2,800 recipients who share ideas and plans on how to better help student education.

According to the Milken website, the foundation selected Martin because they were moved by the story of education on the Navajo Nation – how students travel many miles across rural country roads to get to school.

Coming from homes with no running water or electricity and yet educators like Martin would go beyond expectations to provide not only education for the students, but the love and support they need.

The award was presented by National Institute for Excellence in Teaching Co-President and COO Joshua Barnett, representing the Milken Family Foundation, and Hoffman.

Barnett spoke of how the Chinle Unified School District had grown to better serve the students and that was due in part to Martin’s contribution with her leadership and care.

“I think Principal Martin has just demonstrated a continuous performance of excellence both as a teacher, as an instructional coach and as a principal just demonstrates a real love for the student,” Barnett said.

“As she said during the presentation and that, that love is really transforming opportunities for students,” he said.

Hoffman then spoke of Martin’s resilience and care during the COVID-19 outbreak, how she adapted and organized the school to help provide her students with the necessities during the opening days of the pandemic.

Hoffman also asked for a moment of silence for those lost to the virus.

“I think someone who is supporting their teachers in their schools and demonstrating academic growth is one important component,” Hoffman said.

“But then also working with their students to support their social emotional well-being,” he said, “we know that Navajo Nation has been through so much during the pandemic and so it’s really important to have leaders like Principal Martin who have the compassion and the courage to be a leader through this difficult year.”

Martin said, “I think that it’s such an important recognition to have an educator from the Navajo Nation and certainly to be recognized at the national level and to be put on the map for all the amazing work that’s being done here. I think is something I’m very proud of.”

Chinle’s superintendent, Quincy Natay, then took the stand and praised Martin for what she provides for the students and community.

His achievements and that of Martin are new milestones set for the Navajo community.

“She is a very caring individual, loves her students, loves to work, is a hard worker and that speaks to her work,” Natay said. “In my district we have awesome educators and that’s how we push the envelope and that’s how we became the top performing reservation district in Arizona.”

Also in attendance was President Jonathan Nez, who was very happy with the award as it shined a spotlight on the Nation, displaying the strength of the people’s educators while also highlighting the importance of education.

Martin grew up in Chinle and was raised in the traditional culture. Her grandparents were silversmiths who made great sacrifices to make sure their children had an education, an important quality that was passed down to Martin.

Martin returned home in 2004 and was an academic coach at Chinle Elementary School, there she’d assist teachers, test new instructional practices, and led weekly professional development, specifically for teachers in pre-K through the second grade.

In 2020, she moved to the junior high where she became the new principal.

Martin has focused on student learning and responsive actions to meet family and staff needs.

“I love them,” she said. “I see beauty in them. Not just beauty of the model magazine type way, I mean beauty and happiness.”

Martin was a key member of the leadership team that led steady growth in academic achievement at CES. The school rose from a D-rated school to a B. The district is now the highest-performing reservation district in Arizona.

In 2020, the school was selected among five nationwide as an NIET Founder’s Award finalist.

“So if that means that I get recognized like this, then that’s a good thing,” she said.

Before the surprise, Martin and a student, Angel Gonzales, made a T-Shirt as a gift for Hoffman, which they presented towards the end of the assembly.

“I am just the single representation of all the good people in the Chinle Unified School District,” Martin said. “There are many people who come to work every day with their hearts with their love and their dedication who work towards that vision.”