‘Back to our mother’: Branch plans transform government to serve the people 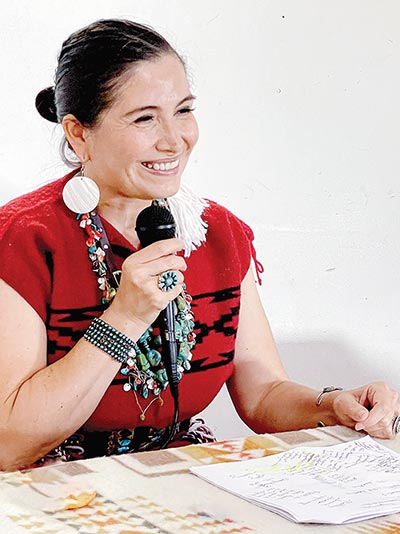 The Harvard University-educated candidate made her announcement from her homeland in Leupp, Arizona, the Nation’s first chapter, and said her plan is to “reclaim the government for the people” and restore hope and harmony through government reform and law reform.

“My administration is going to be about turning back to our mother and to who we are as Diné,” Branch told Navajo Times.

This includes returning to the traditions that sustained the Navajo people prior to colonization and applying government resources strategically to advance equity across Navajo.

“At one time we had strong Diné leaders and institutions of governance,” said Branch. “This made us an undefeatable nation. It was only through extreme human rights violations that our strength was shaken.”

She believes the Navajo government must be redesigned in a way that resonates with Diné culture and is thereby authentically for the people and by the people.

“I was born and raised in this community and I come from a sheep- and cattle-ranching family,” said Branch. “That’s why I care so deeply about it. To me this is the highest work I could possibly do in terms of serving the people.”

If elected president, Branch said she will immediately begin a “national conversation” with the Diné people about what they want their government to look like today.

Branch said because of that lack of government accountability, many Diné have been driven to flee their homelands.

“What this government model has done is try to extract all of the remaining wealth and value left from our land and our people,” she said. “It’s designed to do that permanently.”

She said a strong, functioning Navajo economy is not part of that model because that would give people access to wealth and resources and give them a reason to remain in their communities.

“I think we have tried too hard to mimic the United States model of government and we’ve created more process than is necessary,” she said. “We’ve really trapped ourselves by these laws and regulations and they’ve created inhospitable conditions for our people.”

She said, as it stands right now, the people don’t believe in their government.

“They know that it isn’t meeting their needs and they have no faith that it will ever meet their needs,” she said.

Within the first 30 days of her administration, Branch said she will assemble a “Government Efficiency Task Force” to identify and eliminate inefficiencies and improve services within her first 100 days in office.

Branch also believes the federal trust land construct that asserts the dispossession of the land from the people is illegitimate and “a fiction” that further erodes Navajo sovereignty.

“We as the Diyin Nohookáá Diné have obligations towards this land, Nihimá Nahasdzáán, that we have severely violated under our colonial government,” she said. “The balance and relationship between our mother and our people needs to be restored.”

Branch said for too long the Navajo government and its federal overseers have denied the people the wealth they have in the land, perpetuating their disempowerment.

“Our people know the boundaries of their land, and it is not a mere one-acre homesite,” said Branch. “It is the land our families have grazed or farmed for generations.

“We have an alliance with the United States, but this land is still ours and this Nation is still ours,” she said. “I think we need to protect and reassert what we believe and know to be true, which is that this land belongs to our people.”

This will involve land law reform and strengthening land rights in order to create conditions for economic development and wealth building for Diné families and communities.

“I understand the United States is not going to go away, but that doesn’t mean that we have to be trapped within the sandbox that it has created for us,” said Branch.

She suggests, with the current U.S. President Joe Biden and Secretary of Interior Debra Haaland, it might also be time for the Navajo Nation to reevaluate its relationship with the United States and rethink the 1868 Treaty, which was signed under duress.

It’s also important for the U.S. to consider compensation to make up for all that was “stolen” from the Navajo people in the past and the sustained inequities that have persisted to this day, she said.

“The reparations to be paid could be an important source of funds to give our government parity in governmental infrastructure with other governments in this country, to ensure equal access to 21st century living conditions for our people,” said Branch.

Branch also wants to focus on advancing the healing of the Nation by confronting community challenges holistically and offering a full spectrum of government services to help families restore harmony.

“I think that what is necessary to move in that direction is, first, a complete transformation of our legal system where we start with peacemaking courts,” she said.

She said the Navajo Nation criminal justice system is “in disarray,” underfunded and struggling to meet the needs of the people in an environment where violent crime, substance abuse, and suicide are at an all-time high.

Right now, she said, the peacemaking system is used almost exclusively for sentencing purposes and that’s not what it was designed for.

“The peacemaking court is our original dispute resolution model and problem-solving model,” said Branch. “I think that’s really important because that resonates with our people.”

This does not eliminate the tools of the Western model and punishment as an option, but creates a new starting point for problem solving, she said.

“Unfortunately, we have become over-reliant on a Western model of dispute resolution that doesn’t recognize the humanity of our people or offer an opportunity for a family in crisis to heal,” said Branch. “By returning to our traditional institution of peacemaking, we can solve crises rather than simply meting out punishment.”

As part of the national conversation, Branch said she will open up the discussion about these options for reform of the legal system directly with the Diné to receive their advice and preferences.

“Without addressing those foundational issues, we will continue to operate under the colonial government model,” she said. “That model was not designed to serve us. It was designed to finish what the soldiers started in the late 1800s.”

Branch also plans to activate the fourth branch of government, the National Security Branch (as described in Title 1), that would be shielded from politics to respond to events like the COVID-19 pandemic and the climate-change crisis.

“A big part of that function to me is emergency preparedness and emergency response,” she said. “We need an entity within the government that is capable of responding and protecting our people.”

Branch said she has very serious concerns about the continued habitability of Navajo Nation because of intensifying weather conditions.

“Having a climate change adaptation plan is really important to me and making sure that our elders and community members have habitable, weatherized homes, access to electricity and piped water,” she said. “Our people need these health-based tools to survive in our environment.”

Branch said other offices that need insulation from the politics of Window Rock like ethics and rules, auditor general, attorney general, and the controller could be also housed under this branch.

Branch plans to reinvigorate and invest in the preservation of language and culture.

“We hear a lot of rhetoric in Window Rock, but I don’t see our government actually spending any money on proactively preserving those things,” she said.

“We can’t simply talk about the importance of language and culture,” she said, “we must take action before it is too late.”

She said this is even more urgent after the pandemic during which about two-thirds of the Navajo people lost to COVID-19 were over 60 years old.

Branch wants to establish a paid fellowship program for language and culture bearers. This is so that all they have to be concerned about is continuing traditional practices and preserving and passing on their knowledge.

“These people are national treasures and we should be compensating them appropriately,” she said.

She wants to create language and culture institutes, require daily teaching of Diné Bizaad in every school on the Navajo Nation, and expand immersion programs and paid apprenticeship programs.

“If we’re really serious about our continued existence as Diné people, we have to start taking these proactive measures,” she said. “If we do nothing, our people will completely disappear into the fabric of America.”