Happy birthday to a great cowboy and dad 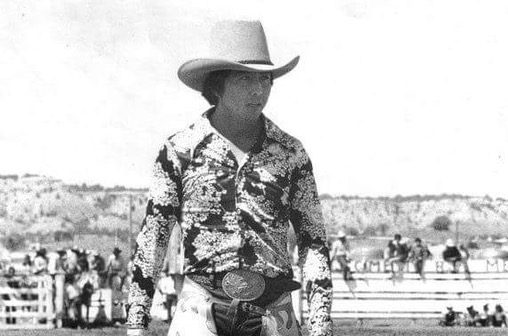 Spurring a bucking horse, while holding on to a rein with one hand for eight seconds looked so effortless when I would watch my dad.

My fondest memory from my childhood is travelling with my family to rodeos, sitting up in the bleachers and waiting nervously for my dad’s name to blare from the speakers.

“The next cowboy needs no introduction,” the announcer would usually say. “This man won the very first Indian National Finals Rodeo in the saddle bronc category back in 1976. He’s like the Energizer bunny he – keeps going and going. It’s Archie Becenti!”

And boom!  My dad would burst out of the bucking shoot riding an angry bronc. And I would stand up from the bleachers and yell with the crowd, while the rest of my family would be screaming, “Spur! Go dad! Stay on! Spur!”

Today is his birthday, so I decided to write this Reporter’s Notebook as a birthday gift to the man, the myth, the legend: Archie Becenti, my dad.

In my mind, my dad is a man among men. Not only has he been an amazing athlete all his life, he is an even greater father and husband. (Just a side note: my mom, Rosemarie, and my dad will be celebrating their 40th anniversary in May.)

I’ve always believed my dad was an outstanding cowboy and an awesome dad, because it’s what he loves most in life. He’s always showed nothing but love, support, and pride for his kids.

“Only rich people retire,” my dad would say to people when they would ask him when he would stop the rodeo life.

My dad has been a fixture in the Navajo Times before, and so I thought it was only fitting that since I’m a reporter for the Times, I would bring him back to these pages to share how great of a dad he’s always been.

My dad is from Crownpoint. He was a sheepherder and I really don’t know when he realized his rodeo talents. But once my dad honed his craft you couldn’t stop him. Rodeo took him everywhere. Rodeo took him out of the sheep camp. He was part of the professional circuit competing with the likes of Lane Frost and Tuff Hedeman.

My mom stood next to him and earned her income by way of being a language arts teacher. They met while she was in college at Arizona State University. She eventually went on to receive three master’s degrees from Grand Canyon University

“Oh, man, he was hot,” my mom says of my dad, but not in the superficial way. Rather, she was describing his winning streak when they started dating. “He would pick me up in his El Camino, but he was so quiet.”

Unlike my mom, who is a social butterfly and, with her charms and gorgeous smile, can make friends with just about anyone, my dad is quiet and reserved. This shy trait is definitely a characteristic I inherited from him.

An extremely intelligent man, especially when it comes to math and science (a trait I did not inherit), my dad always has positive words of wisdom for me.

“If man made it, man can fix it,” he would say to me for one reason or another. “You’re smart, I know you’re smart. Just envision yourself succeeding and believe it. Don’t be scared.”

Only once have I ever heard my dad speak about being afraid. He tells a story of how one day, while herding the sheep, he started wondering if that would be his life if the rodeo thing did not work out. The thought frightened him, so he got up, walked to the BIA office and asked for money to pay for school. The next thing he knew he was on the Greyhound to Dallas where he attended a trade school to become a draftsman. I think this turning point in his life was the reason he has always stressed the importance of an education to his kids.

Unlike my dad, I’m more pessimistic than optimistic, especially when it comes to my own abilities, but my dad always saw greatness in his kids. When my dad would tell me “Don’t be scared,” I would listen, because it was coming from someone who rode huge bulls and bucking horses to support his family; even if he had broken bones, it didn’t matter; he would still compete and win.

Every time I felt like giving up, I thought of my dad and all he did for me, and it gave me that extra push I needed. While in college, where it seemed as though everyone was driving a Mercedes while I was driving my Bronco II I purchased off craigslist, I would be down in the dumps with my major choice and future. “Who’s going to hire an English Literature major to be a journalist? How am I going to interview people when I can’t even speak up in class?” That was my train of thinking.

Being rejected by Navajo Times for an internship broke my heart, but my dad’s example of trying and not giving up prevailed. Eventually, I got to the Navajo Times, but not until after five years at another paper.

Growing up I was awkward. I had glasses, braces, and I was so painfully shy. My favorite music was the oldies, and my favorite band was and still is the Beatles. I wasn’t popular or cool, not even a little, and other kids would tell me I wasn’t

But, that was OK; my dad enjoyed listening to the oldies with me and he was a tough cowboy, and that’s all that mattered.

Everything my dad did, I tried to emulate.  My affinity for running comes from him. He would wake me up before the sun and we would run together. He was a talented long distance runner, but I could never match his endurance.

Knowing how talented of an athlete he is, I tried out for every sport I could; cross-country, basketball and softball. I lacked talent in all these, but it didn’t stop me from trying. And it was worth it to see my dad there at my games or meets.

After my awkward stage, I put it in my mind that I would try out for Native modeling because it was becoming the thing to do. I did some runway shows, had my own ad in Cowboys and Indians magazine and was selected to be in the Women of the Navajo. I pursued all of this not because I was vain, but to face my fear and doubts that I carried about myself. I never asked my dad how he had such confidence in his rodeo talents; I just played his positive words over and over in my head and tried to mirror his confidence that I would see every time he would get on a horse.

What I’m saying is this: My dad’s love and support is evident every day, and he doesn’t have to express it through words. I have a lifetime of memories of sitting on those bleachers, yelling from the top of my lungs and watching my dad ride those broncs. He did that for his family and all my accomplishments, though may be nothing to others, are a huge deal to my dad. That’s all that matters.