Guest Column: A Diné wedding or not? Tradition wins 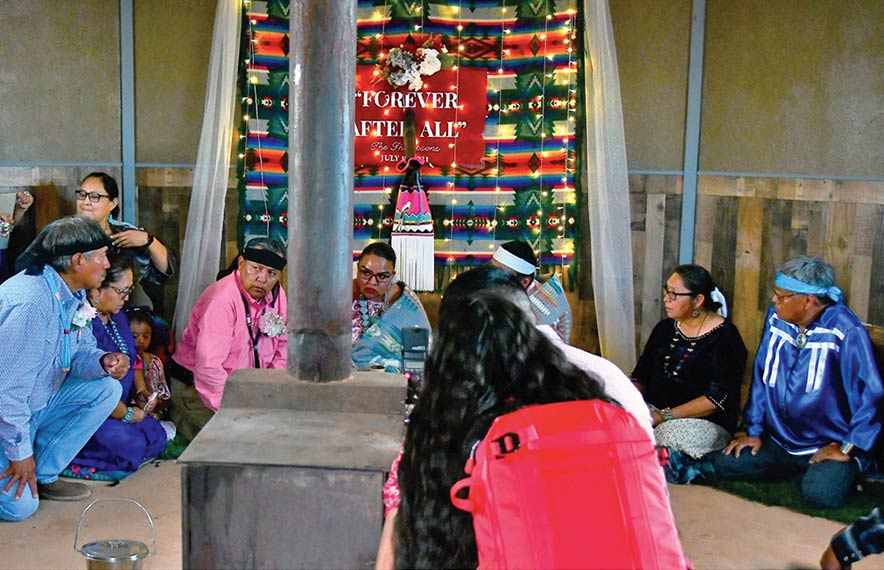 Special to the Times | Bazhnibah
In the hogan, at right are the groom’s parents, Marty and Roberta Thompson, who listen to instructions given to the bride and groom.

By Bazhnibah
Special to the Times

In the last couple of years, we wanted to do a Navajo wedding to renew our vows. We did not have a wedding since we secretly said our vows in 1978. We had been together for two years at the time.

His family in Japan did not know much about our relationship. My Navajo family knew but never stated any plans about marriage and certainly not a wedding. They were busy with work and life.
We were busy with school and work too. Every year since 1978 we bring up the subject but it went nowhere.

This past weekend, we were fortunate to attend a traditional Navajo wedding with the Monument Valley area in the distance. What a view it was. We took photographs from afar staying masked and distanced. It was a beautiful summer event.

Traditional weddings were sacred and still are today with revisions. Traditionally, the man’s family “hunted” for the right bride for their son. They looked for a good family, preferably a well-known family with weavers, material goods, and wealth such as those with livestock.

Most often, the young man was not told until the wedding was to take place. To have a traditional wedding meant that the bride and groom had not seen each other before; dating or touching the other person must not have taken place; both had to be pure, without contact with the opposite sex; without living together getting to know each other and without children.

Traditional weddings were sacred at one time. When a couple married in a hogan with taa’niil (cornmeal mush), it meant that a man and woman were joined together. This union meant that they could now have children.

In the hogan, the cornmeal mush in a basket was the most important element in the traditional wedding. Different kinds of corn were used but blue cornmeal mush was often used.

A dowry was different from the Western dowry where the bride was “paid for.” In Navajo, the dowry was paid for the cornmeal mush and basket, not for marriage or the bride.

The most important component for a traditional wedding was to continue the human race, a planting of life. A wedding was not for entertainment. 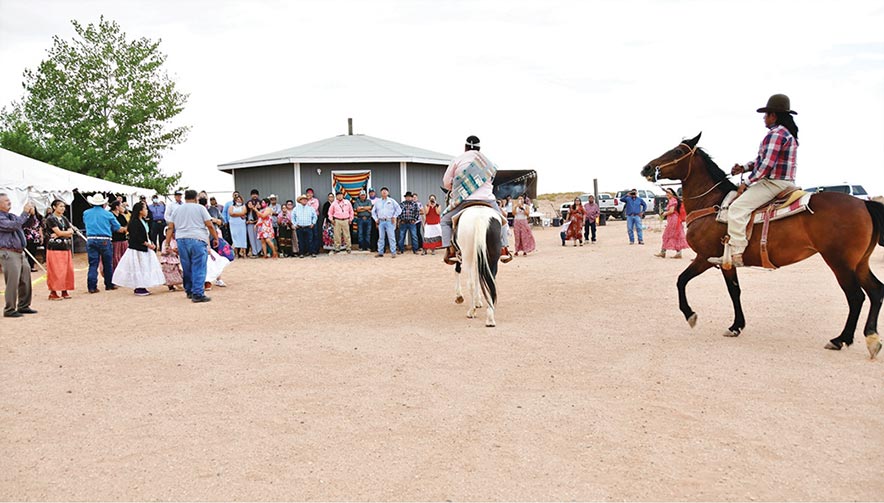 Special to the Times | Bazhnibah
Carlton Thompson, the groom on a white horse, and Derek Thompson ride up to the hogan where the bride’s family, relatives and the medicine men wait in anticipation of his arrival.

When the groom arrived by horseback at the hogan, the saddle on which he rode was taken inside by the groom’s uncle and placed behind where the groom sat. An uncle came with the water inside the hogan, followed by the bride with the cornmeal mush in a basket.

The water was used to wash each other’s hands as the couple wedded. The bride sat facing east on the south side and the groom sat to her left on the north side. The medicine man sat in front of the bride.

The water container had a single spout, not two. This single spout represented the union of one voice, to avoid argument between the couple.

The handwash was done to cleanse off past vices such as lies, cheating, wildness, etc. It signified that both were now clean and ready to make a new life together as man and wife. And to have children.

Traditional Navajo weddings were and are still done at sundown. The bride was not to be seen by the sun or sunlight, so she covered her head as she approached the hogan to be married. These days, the cover is usually a Pendleton blanket. 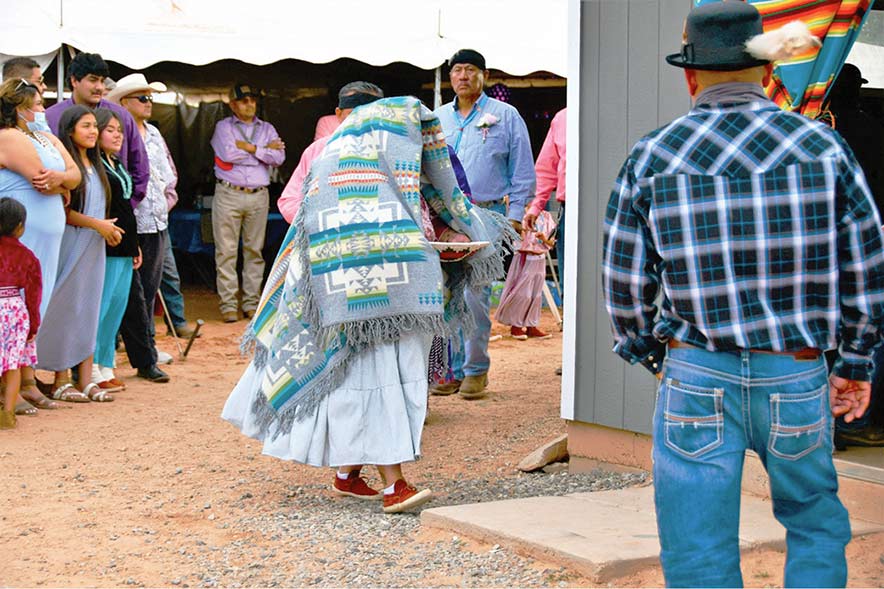 Special to the Times | Bazhnibah
The head and face of the bride, Yasmin, are covered by a Pendleton blanket as she carries cornmeal mush into the hogan with her family and the medicine folks.

It is said that, like a father of the bride, the sun is “jealous” of the human race, therefore it cannot see the bride.

The groom was to stay at the bride’s family’s homeland where he was expected to make a home for his future family. A new hogan was built and the couple started a new life together.

There were many teachings to the couple as they married. Teachings about life, about family planning, and about taking care of each other were important topics while in the hogan and after the cornmeal was taken.

At the traditional wedding, the bride’s family did not enter the hogan. Rather they stayed outside and prepared a meal for the groom and his family and relatives.

The mother of the bride was not to look at her son-in-law. It was forbidden.

Traditionally the food also came in the hogan with the cornmeal mush but nowadays we do not see that. There were many other rules and responsibilities of a Navajo family in these traditional weddings. Today we have seen all kinds and variations of “traditional weddings.”

After all this new knowledge gained, we decided to honor the Navajo tradition and not partake of the traditional wedding ceremony meant for the young and untainted. Since we live in this modern world, our choices are a modified Japanese or a simple contemporary renewal of vows.

Maybe we don’t need to renew our vows, just live and enjoy the rest of our lives.

To those who are just joining in matrimony, we congratulate you and may your married lives be fulfilling!