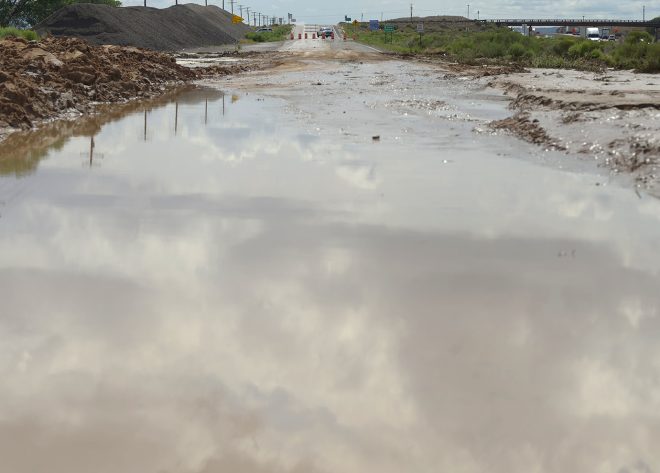 Navajo Times | Donovan Quintero
Clouds reflect into a large puddle of water caused by a flash flood on New Mexico State Road 118 east of Gallup. About a thousand foot section of the road was covered in about 2-3 feet of mud.


GALLUP
Flash flood and severe thunderstorms warnings are in effect.
About 1,000 feet of Frontage Road east of Gallup quickly became a dangerous area as it quickly became flooded on Friday night, according to Undersheriff James Maiorano III with the McKinley County Sheriff’s Office in Gallup.
Maiorano said Interstate 40 near the Fort Wingate exit, about 12 miles east U.S. Highway 491, became flooded because of heavy rainfall.
Several vehicles, including an ambulance and a four-wheel-drive tow truck, became stuck in the mud about 2-3 feet deep.
On Saturday, two heavy equipment vehicles from the New Mexico Department of Transportation began to remove the thick mud from the highway. A BNSF railroad worker said he spent the night in his pickup truck after getting stuck in the mud around 10:30 p.m. The driver of a semi, police said, also spent the night in his truck. 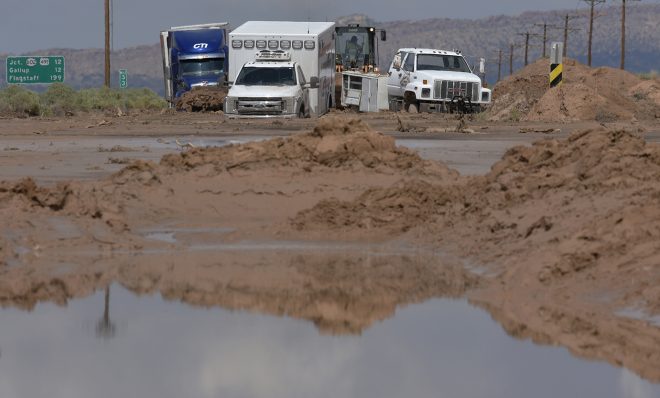 Navajo Times | Donovan Quintero
An ambulance and several other vehicles sit stuck in the mud on Saturday east of Gallup, along Interstate 40. The National Weather Service issued several flash flood warnings and several thunderstorm warnings across the Navajo Nation.

Across many parts of the reservation, the monsoon rains have brought much-needed moisture to the area gripped in a megadrought for more than 20 years. The rainstorms have also caught many drivers off guard, causing them to get stuck in the mud or flash floods.
A McKinley County dispatcher reported a pickup truck, with three people in it, becoming trapped in a flash flood, 3.5 miles west of the Mexican Springs Chapter House. Highways in Apache County, south of the interstate, also became flooded.
In Coconino County, neighborhoods in Flagstaff have become raging rivers as rains dropped several inches of rain in a single storm, according to Coconino and Apache counties’ emergency management.
While the monsoons have been a significant welcome for the Navajo Nation, the National Weather Service is reporting another heatwave to hit much of the reservation next week, with temperatures reaching 100 degrees and above.
The Navajo Nation continues to experience severe to exceptional drought conditions, according to the U.S. Drought Monitor.
“Drivers should use caution, watch for deep standing water, and expect delays from vehicles navigating the flooding,” Maiorano said.
Maiorano said Frontage Road would be closed for at least a week to clear mud and debris.