Leaders in the field of domestic violence: Sarah Deer 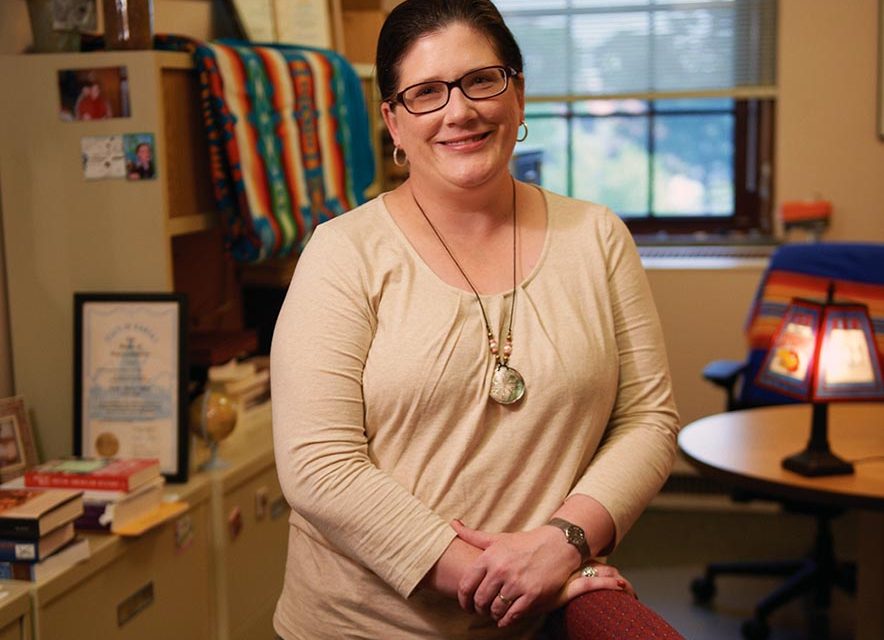 April is Sexual Assault Awareness Month. StrongHearts Native Helpline presents Sarah Deer, a citizen of the Muscogee (Creek) Nation of Oklahoma. She is currently a professor of Women, Gender and Sexuality Studies at the School of Public Affairs and Administration at the University of Kansas, and chief justice for the Prairie Island Indian Community Court of Appeals.

Sarah Deer didn’t see herself walking in the footsteps of her parents, so she went to school with a desire to become an actress. Acting is known to be a highly competitive vocation, so she charted a new path.

She attended the University of Kansas majoring in women’s studies and philosophy. These are the qualities of the leader she was naturally inclined to be.

“My dad was a lawyer and a judge when I was growing up and I didn’t necessarily want to go that route,” said Deer.

Her father is a respected tribal court judge for the Muscogee (Creek) Nation Supreme Court. Her mother is a teacher who taught middle school biology.

She could have leaned into both professions, but decided early on that she wanted to walk her own path in life – a path that had already been carved by the ancestors long before she knew it.

Deer was born in Silver Spring, Maryland, but was raised in Wichita, Kansas, where she spent her high school years participating in History Day, debate, forensics, theater and volleyball.
She took first place in public speaking and debate in the Original Oration competition.

In college, she majored in women’s studies and philosophy at the University of Kansas.

Her future was beginning to take shape when she applied to be a volunteer advocate at a rape crisis center in Lawrence, Kansas, where the seeds of justice began to grow.

As an advocate, Deer sat through multiple jury trials and witnessed the unjust treatment of rape victims in the courts and surmised that it is no wonder that the number of rapes in America is so underreported. Victims of sexual violence were being re-victimized by the legal system.

“I sat through a lot of cases and saw the difficult struggles victims were experiencing,” said Deer. “That’s when I decided to go to law school.”

Deer committed to the cause of helping rape victims throughout the legal process. She studied the processes and procedures and began to imagine how prosecutors could do a better job in cases of sexual violence.

Eliminating the element of victim blaming was a top priority.

Victim blaming is the attitude that suggests the victim rather than the perpetrator is responsible for the assault against them.

Defense attorneys imply the victim’s own actions, words and/or dress provoked the attack against them.

In reality, victim blaming is a cruel attack on the victim that is not only baseless, but it is also traumatizing and an effective deterrent to reporting future attacks.

“All across the board rape is underreported,” Deer explained. “There’s no way of knowing the percentage of people who (do not report), but we do know how unusual it is for rape victims to call for help.”

She added that sexual violence needs to be understood as a pattern that began with Columbus — when Native peoples were targeted, stalked and kidnapped.

She stopped short of the gruesome details that caused historical trauma in Indian Country — though it is worth mentioning in brief.

Columbus subjugated Indigenous peoples with genocidal tactics including torture, rape, dismemberment and murder so brutal that Native peoples could never forget the trauma of colonization.

The lust and greed of colonizers, the religious assimilation, the degradation and dehumanizing treatment of Native peoples still prevail in racism and stereotyping.

Those who survived the human carnage of Columbus often committed suicide. The aftermath continues.

Truth be known, Native women and girls have long been subjected to unjust treatment at the hands of non-Natives but those relationships were made even more complicated in the judicial system through either lack of jurisdiction and/or jurisdictional negligence on behalf of state and federal courts.

These jurisdictional loopholes enable perpetrators who commit crimes on tribal land and against Native peoples to escape prosecution.

Deer explained that tribal courts have not had jurisdiction over non-Native perpetrators who commit criminal offenses against Native people since the 1978 Supreme Court decision in Oliphant v. Suquamish.

This is especially devastating in cases sexual violence. Beyond that injustice is having an insufficient tribal police force — whose lack of access to resources is another barrier to justice.

In 2013, Deer’s testimony before Congress regarding violence against Native women contributed to the reauthorization of the Violence Against Women Act wherein provisions addressed tribal jurisdiction over domestic violence cases and assaulting a police officer.

While many applauded this legislation, Deer saw those provisions as a step in the right direction rather than a victory.

“I don’t think we stop at piecemeal legislation. We need full and complete jurisdiction,” said Deer who admits that tribal court jurisdiction over non-Natives is not easily taken to task especially in light of previous court rulings.

“My long-term goal is to overturn Oliphant,” said Deer referring to the U.S. Supreme Court case that determined “Indian tribal courts do not have inherent criminal jurisdiction to try and to punish non-Indians, and hence may not assume such jurisdiction unless specifically authorized to do so by Congress.”

Deer understands that the impact of that ruling has been a barrier to justice ever since.

She explained that overturning Oliphant could take years if not decades, but to do so would make a clearer path to justice.

Until then, she intends to stay the course and maintain her life’s goal to end violence against women.

In 2019, Deer’s work as a lawyer and advocate did not go unnoticed. As a recognized legal scholar, a university professor, and a dedicated activist for Indigenous women, she was inducted into the National Women’s Hall of Fame where she met Sonia Maria Sotomayor, associate justice of the Supreme Court of the United States.

It is her most cherished memory and a highlight in her career.

Additionally, Deer was named a MacArthur Foundation Fellow in 2014 and a Carnegie Fellow in 2020.

She also co-authored four textbooks on tribal law and has been published in a wide variety of law journals.

In 2015, she authored “The Beginning and End of Rape: Confronting Sexual Violence in Native America,” a culmination of over 25 years of experience working with survivors.

In the voice of an advocate to victims of sexual violence, Deer shared a message from the heart.

“Being a victim doesn’t identify who you are. It’s something that happened to you,” said Deer.

“I want victims to know that the violence that happened to them may affect them,” she said, “but it doesn’t define and can never change the core of who they are nor the value of who they are.
It doesn’t matter if the sexual assault happened 40 years ago. There is hope and there are people who can help.”

If you or a loved one has been hurt or is being hurt by sexual violence, StrongHearts Native Helpline can help.

Advocates are available daily 24 hours a day, 7 days a week.