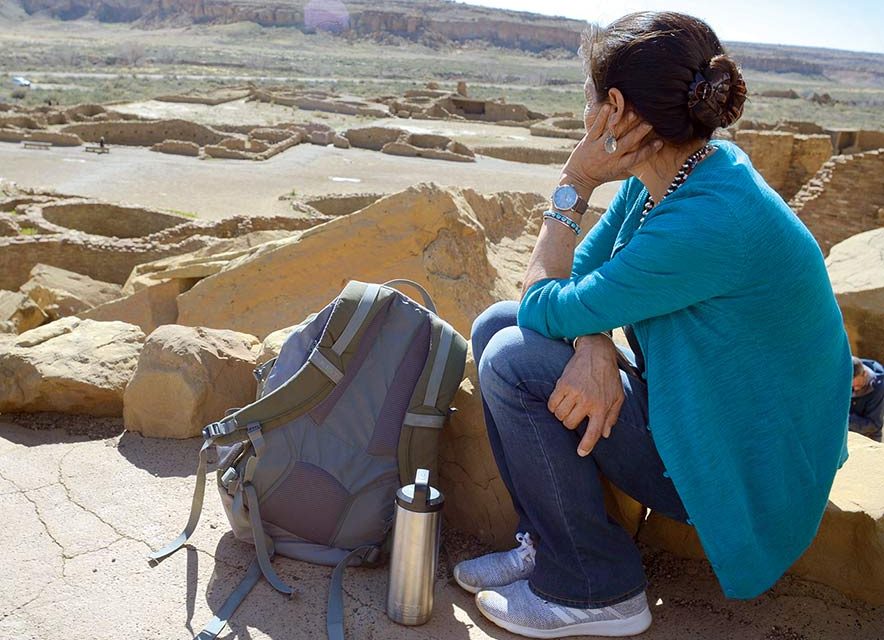 These families were never invited to sit down with federal officials and discuss their concerns, he said.

In addition, Chavez said Interior Secretary Deb Haaland will consider a 20-year ban on oil and gas development after the Bureau of Land Management conducts an environmental analysis.

The decision to protect Chaco Culture National Historical Park and related areas, which the Interior listed as a UNESCO World Heritage Site in 1987, from mining activity was announced on Monday during the White House Tribal Nations Summit.

While Monday’s decision to keep the area from future oil and gas development, Chavez said allottees will most likely face financial ruin.

“It will limit the exploration of gas leasing in the area,” Chavez said on Monday and could chase prospective oil companies away.

Allottee’s income would be impacted if allotments are not feasible for oil and gas exploration, he said.

In the coming weeks, BLM will publish a notice in the Federal Register to begin a two-year segregation of the federal lands. During that time, BLM will consult with tribes around the area and seek public comment on the proposed administrative withdrawal.

“The segregation and potential withdrawal would not affect existing valid leases or rights and would not apply to minerals owned by private, state or tribal entities,” said a Nov. 15 Interior statement.

Haaland ordered Interior to undertake a broader assessment of the greater Chaco cultural landscape to ensure that public land management better reflects the sacred sites, stories, and cultural resources in the region.

“Chaco Canyon is a sacred place that holds deep meaning for the Indigenous peoples whose ancestors lived, worked, and thrived in that high desert community,” Haaland said.

“Now is the time to consider more enduring protections for the living landscape that is Chaco,” she said, “so that we can pass on this rich cultural legacy to future generations.”

In early 2022, both Interior, the BLM and the BIA will begin discussions with tribes, communities, elected officials to explore ways to manage existing energy development and build a framework toward a sustainable economic future.

Delora Hesuse, a Navajo allotment owner in Nageezi, in 2019 testified at U.S. House hearing during a discussion on the Chaco Canyon Heritage Area Protection Act.

Hesuse said many individual Navajos own private land and the minerals underneath.

“This is a steadfast personal property right that sustains our livelihoods and way of life,” she said, adding that the bill would make mineral rights off limits, stopping much-needed income.

“I’m not exaggerating the importance of this income,” she said.

According to Hesuse, in 2015, the federal Indian Minerals Office distributed $96 million to 20,835 allottees, which helped them feed, shelter, clothe and protect their families.

“My ancestors were allotted the land and minerals rights by the United States government many generations ago, and it pains me to see that my own leaders, both tribal and U.S. House of Representatives and Senate, are supporting a bill that put my oil and gas rights off limits,” Hesuse told the committee.

During her testimony, Hesuse said she had a petition signed by 131 allottees to oppose the proposed buffer zone.

She also gave the committee a separate petition stating that environmentalists do not speak on their behalf.

“These lands were given to our great-great-grandparents in exchange for citizenship, and we have rights as citizens and landowners to develop our lands for oil and gas as we see fit,” she said.

Chavez said the fight isn’t over for the allottees.

“There are other things that we can take a look at,” he said. “I won’t know what those things are until I sit down and meet with the board.”

The Navajo Nation Council released a statement reaffirming its opposition to the Biden administration’s proposal to to ban oil and gas drilling for 20 years and create a 10-mile buffer zone around Chaco Canyon.

“The position of the Navajo Nation Council is for the creation of a five-mile buffer within and around the sacred site,” said Speaker Seth Damon. “It is important that the federal government consider and work with our Navajo allottees to further advance development.”

In 2020, the Naabik’íyáti Committee unanimously opposed the Chaco Heritage Area Protection Act’s proposed 10-mile buffer zone. The Council voted to have it reduced to five miles.