Begaye to sue Gold King Mine and EPA

A dam breach that released a million gallons of wastewater into the Animas River on Aug. 5 colors the river orange as it merges with the San Juan River, right, on Saturday in Farmington. Navajo Nation tribal officials have been visiting community members living along the San Juan River to inform them to not use or swim in the river’s water until further notice. (Times photo – Donovan Quintero)

As Navajo Nation police and tribal officials went up and down the San Juan River shore Saturday warning community members of contaminated water from the Gold King Mine, Navajo Nation President Russell Begaye was making plans for a clean-up as well as possible lawsuits against the mine and the U.S. Environmental Protection Agency. 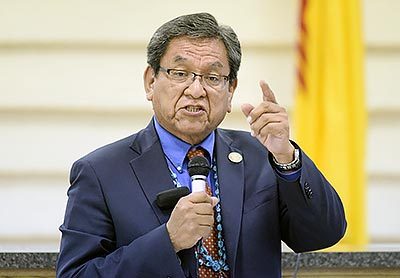 Navajo Nation President Russell Begaye says the tribe is going to sue Gold King Mine and the EPA during a community meeting at the Shiprock Chapter House Saturday evening in Shiprock. “”Looks like we are going to be suing somebody because this is going to come down to Navajo Nation water. I did a directive, we are gonna sue the mine and also EPA,” Begaye said. (Times photo – Donovan Quintero)

“We are going to be suing for millions- billions of dollars,” Begaye said.

Begaye and Navajo Vice President Jonathan Nez met with between 150 and 200 community members about 5:30 p.m. Saturday to give them an update on the situation.

Begaye said he learned on Wednesday that one million gallons of mine wastewater had breached a wall at the Gold King Mine near Silverton, Colo. and was heading for the Navajo reservation.

During an Aug. 5 excavation conducted by the EPA at the mine site, loose material gave way, spilling the contaminated water into Cement Creek, which feeds into the Animas River.

At that point. Begaye held a meeting with the NNEPA, Navajo Department of Transportation, NTUA and others to plan a strategy as they waited for the contaminated water to hit Upper Fruitland late Saturday morning.

He had two priorities: warning the Navajos in the area and making plans about what to do when the contaminated water finally reached the area.
Begay’s message gave three precautions for community members:

He urged ranchers and farmers at the meeting Saturday to be especially careful of their livestock and their children and make sure they took steps to make everyone safe.

“We are going to make EPA pay for this,” he said, adding that he was going to work with NNEPA officials to do tests to see how serious the contamination was to Navajo lands.

He said he didn’t trust the EPA to do the tests because he felt the EPA would not tell them the truth and would try to get the tribe to settle for “pennies” instead of the millions or billions of dollars of damage that was done by the contaminated water.

As of Saturday, no one knew for certain just how serious the contamination was.

Photos of the water just south of the mine showed the river to be a dark mustard color but by the time it was getting to the reservation, it had obviously been diluted in part because of the decision to release more water from the Navajo Dam.

Begaye urged farmers and ranchers to make note of any damage the contaminated water did to their crops and their livestock so that the tribe could ask for damages for them as well.

One thing that is also uncertain is when and how long a clean up will take.

Begaye said he wanted it started as soon as possible, adding that one EPA official said the cleanup could take decades, a remark that got a visible reaction from the people in the audience. 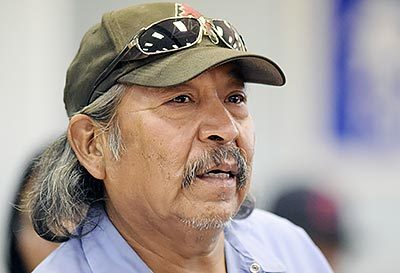 Earl Yazzie, a farmer from Shiprock, reacts when Navajo Nation President Russell Begaye says the EPA said it could take decades to clean up the contamination they caused to the Animas River and San Juan River during a community meeting at the Shiprock Chapter House in Shiprock, N.M. (Times photo – Donovan Quintero)

Earl Yazzie, a farmer from Shiprock, said reports of the contamination was a “big blow to us.”

“This is stressing me out,” he added. “This is just not me but a lot of people are impacted who have farms to take care of.”

He added that water to the area has been off since Thursday.

Duane “Chili” Yazzie, president of the Shiprock Chapter as well as a farmer himself, said his biggest concern was how long before the water is turned back on.

“In two or three weeks, farming families are going to be hurting,” he said. “It’s their livelihood.”

Begaye said the areas that will affected will be affected stretch from the Upper Fruitland area to Lake Powell.” He said some 500 families live along that stretch of the San Juan River.

But this will also affect Navajo communities, such as Red Mesa, to the south and possibly even the Navajo-Gallup Water Pipeline which is currently under construction.

A map put on a chalkboard at the Shiprock Chapter House indicates that the contaminated water will reach Lake Powell at 8 p.m. on Wednesday, August 12.