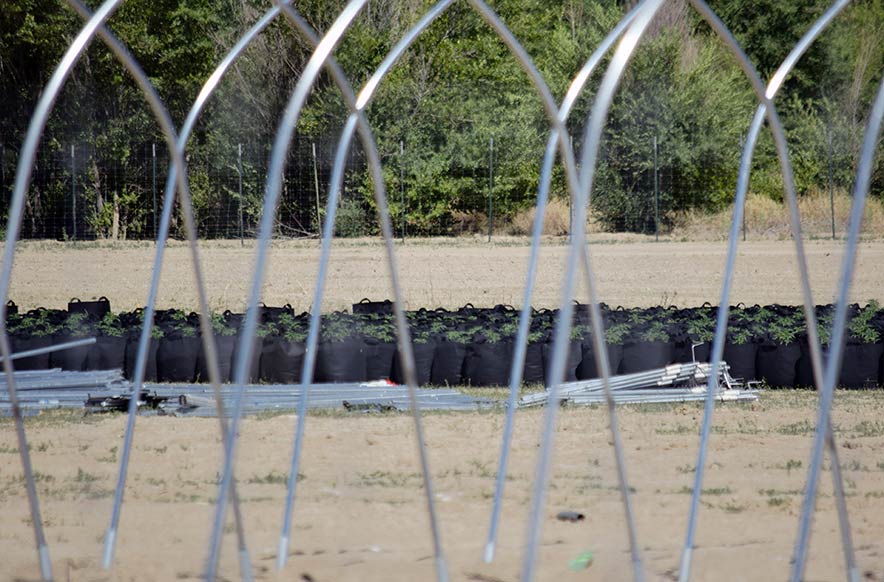 Navajo Times | Ravonelle Yazzie
Bags of hemp can be seen through metal structures to be used for hoop houses at one of many hemp sites in Shiprock.

When Dineh Benally couldn’t get 23rd Navajo Nation Council to approve an amendment to Title 17 so he could cultivate medicinal marijuana, he took matters into his own hands and decided to grow hemp instead and not go through the same hoops he did before.

At first he used the sales pitch that medicinal marijuana was an alternative form of medication that would benefit the Navajo people. He even used his late mother as an example of how marijuana would’ve helped her as she battled cancer.

“My mom, when she got pancreatic cancer, her last four months of her life she suffered,” he explained back in 2017. “She didn’t have the medication to have a better part of life. So that’s why I started this crusade. I learned to believe that this medicine is a medicine.”

Also in 2017, Benally had Leonard Salgado explain the benefits of medicinal marijuana to members of the 23rd Navajo Nation Council.

At the time, he explained using it as an alternative form of medication is much better than pills and so far there has been no deaths as the result of cannabis.

“We’ve talked to tribes in California, Michigan, Arizona, New Mexico,” said Salgado. “They want to learn more. They want to exercise their sovereignty. They want to understand the risks and the upside to it.”

The sponsor at the time, former Delegate Lee Jack, wanted to amend the criminal code to make an exception to possession where it will be lawful for any business to cultivate and produce cannabis, or hemp, for economic, industrial, or scientific purposes.

But, in the end, Jack backed out and withdrew the bill. But that wasn’t the end.

Even if medicinal marijuana was no longer considered, Benally now dabbles with the less potent hemp, which he now grows all across the Northern Agency in Shiprock, Gaadahi, and Hogback.

Hemp has bee legalized somewhat on the Navajo Nation but specifically only for New Mexico State University, which took months of going through committees, Council, and Shiprock Chapter.

In 2019, NMSU was authorized to grow a hemp pilot project for research between Navajo Agricultural Products Industry and NMSU. The legal amount of THC allowed to be grown in the project is 0.3 percent THC and it started on a minuscule 200 square-feet plot, but then in May it was approved to span to five acres – still tiny compared to the huge hemp greenhouses that Benally has placed.

“As it currently stands, its illegal to cultivate hemp on the Navajo Nation,” said Alvina Earnhart, legal counsel for NAPI, in 2019 to the Naabikiyati Committee.

“This resolution will only allow a narrow exception with NMSU,” she said. “It doesn’t permit anyone else to grow hemp. It’s purely intended for research purposes to determine if this crop is viable to grown on the farm.”

A month later NMSU was in front of Shiprock Chapter trying to explain exactly what hemp was. Even then the chapter, which is now plagued with the stench of Benally’s hemp greenhouses at night and are in fear of the non-Navajos who tend to the greenhouses, were apprehensive to even consider the NMSU hemp project.

“We are processing this plant too fast without regulation from the Navajo Nation,” said Sammy Akheah at the June 2019 meeting. “There needs to be regulations installed into this production. I see a lot of new from it.

“You can even plant marijuana in these bushes and no one would notice,” he said. “I see a lot of problems in doing this. We already have problems. We don’t need to generate more problems. All I see in this plant is money.”

President of farm board

Throughout the community of Shiprock, it’s been said that Benally, who is the president of the San Juan River Farm Board, has used his position and the current pandemic to move forward with his hemp project.

Community members even believe he bought off farm board members, local officials, and farm owners, in order to let him cultivate as much hemp as he wants and for them to turn a blind eye completely.

Local residents are the ones who have been voicing their opposition to Benally, whereas local officials have kept mum.

In a year’s time, Delegate and Law and Order Committee Chair Eugenia Charles-Newton went from being against the NMSU pilot project and voting against it on the Council because her chapter did not have a resolution, to not raising concern over Benally’s massive hemp project.

She claimed because it was under investigation, even after Navajo Police sent out a press release on Benally’s hemp project, calling it illegal.

“Hemp is not illegal on the Navajo Nation,” Charles-Newton responded to a previous emailed list of questions sent to the speaker’s office by this reporter.

“A revamp of Title 17 during the 23rd Navajo Nation Council decreased the THC level, and no regulations were put in place regarding hemp,” she said. “Hemp production is happening up and down the San Juan River, not just in Shiprock. Other farmers have taken up production of hemp.”

So Benally has definitely taken up production of hemp but he went about it in an illegal way – so illegal that the Navajo Nation’s Department of Justice has filed a lawsuit against him. But he continues to grow hemp.

“They also passed an order to issue a temporary restraining order to stop production and stop growing,” said Benally during a June 30 meeting. “You, as a farm board, and myself know I’ve been growing this for the past three years. We went to court. The judge denied the order of the Department of Justice or the attorney general. Right now we are moving forward with our growing and production of our farms out here.”

It also states the Navajo Nation has not created a regulatory system nor obtained the necessary and applicable permits for industrial hemp cultivation and production, and that NMSU pilot project is the only entity allowed to grow hemp on NAPI lands.

“On May 20, 2020, the Navajo Nation president signed Resolution No. CMY-43-20 into law, but made clear in a letter to Speaker Damon that the ‘Navajo people must keep in mind that the growth, cultivation and marketing of industrial hemp is still unauthorized and can place Navajo farm permits in jeopardy when grown outside of this pilot research project,’” stated the complaint.

“The Navajo Nation has only authorized hemp in one very specific circumstance and its an experimental grow,” said Charles Galbraith, who is representing the Navajo Nation in this suit, to the Times.

“It’s basically the size of a dining room table … its done in conjunction with New Mexico State University it has all the testing requirements to ensure that it is hemp, so that it is below the specified THC level,” he said. “That is the only hemp growth the Navajo Nation Council has authorized on the Navajo Nation.”

He explained that Benally has been using creative arguments and as president of the farm board has been issuing licenses to grow hemp, which isn’t what the farm board has no authority to do.
“The farm bureau can’t overrule the Navajo Nation Council,” said Galbraith. “Despite the federal government de-listing hemp from the controlled substance act the Navajo Nation hasn’t done that.”