Cold case: Toddler may have had ties to Navajo Nation 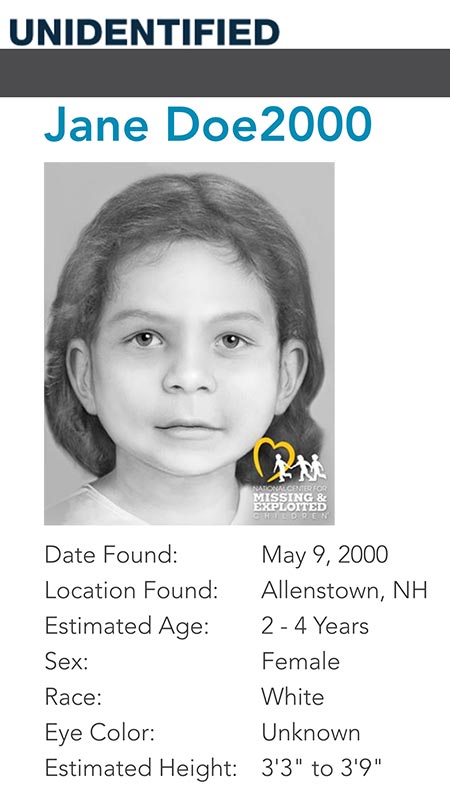 The New Hampshire State Police Cold Case Unit is hoping that someone can help identify a young murder victim who may have had ties to Black Mesa, Arizona.

Sgt. Matthew Koehler, with the Cold Case Unit, said on Friday the skeletal remains of a female toddler, between the ages of 2 and 4, were found on May 9, 2000.

The remains were in a 55-gallon barrel in Allenstown, New Hampshire, more than 2,300 miles away from Navajoland. Another child’s remains were found with the toddler, he added.

DNA also showed the child was the daughter of woman whose remains were found in 1985. She was found with another child in a 55-gallon barrel.

Koehler said the toddler’s DNA revealed she was primarily Caucasian and part Native American, African American and Asian. She was born between 1975 and 1977.

Based on tips, Koehler said the toddler’s father, the primary suspect in her death, had ties to the Navajo Reservation in the 1970s and 1980s.

“As a result of one of those tips, we were able to identify people that associated with Rasmussen,” Koehler said. “As a result of researching those people, we’ve been to identify Rasmussen as having ties to the Navajo Nation and the area surrounding Black Mesa.”

He said he was not able to comment anymore beyond that.

“The focus of our investigation is to try to identify Terry Rasmussen’s biological daughter,” Koehler said. “That is our focus.

Courtesy FBI
Convicted murderer Terry Peder Rasmussen, according to New Hampshire State Police Sergeant Matthew Koehler, through DNA testing, was the unidentified young toddler’s biological father. He was also the primary suspect in her death. He died in 2010 in a California State Prison while serving time for murder. Anyone with information can call the New Hampshire State Police at 603-223-8890, or 1-800-THE LOST (843-5678).

Rasmussen died in a California prison in 2010. Court records indicate he was serving time for the murder of his wife.