Chief: Nothing to white van scare so far

For the past two weeks or so, Navajos have flooded social media with images of white vans driven by “Mexicans” who were supposedly trying to lure in young girls. 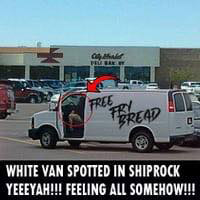 Submitted
This apparently photoshopped meme circulating on Facebook may have been meant as a joke but it alarmed some Navajo Times readers, who sent it in to our Messenger account. Police say they haven’t found any criminal activity associated with white vans on the reservation.

The most extreme — and obviously Photoshopped — example sent to the Times’ Messenger account shows a van with a man sitting in the driver’s seat, the front door open, and the words “free fry bread” scrawled on the body of the van. The Navajo Nation Police have checked out several of these reports (only one person actually thought to call the police; the rest just posted on Facebook, often accompanied by complaints that the police weren’t doing anything about it), and so far have found nothing out of the ordinary, Navajo Nation Police Chief Phillip Francisco said Tuesday.

The police also posted the results of their investigation on their own Facebook page, where some readers accused them of not looking deeply enough into the incidents. So far, according to Francisco, here’s what they found:

One white van was supposedly linked to a missing woman, but she was found safe and had no connection to the van, Francisco said.

He added that he doesn’t want to put a damper on people calling in suspicious happenings.

“I just want them to know that Facebook and the internet is not always monitored by the police department,” he said. “The best thing to do is just report it to your local police district, not post it on Facebook.”