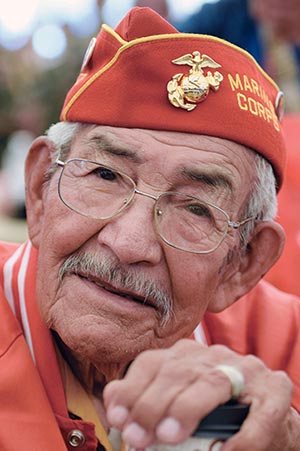 Navajo Code Talker Alfred K. Newman Sr., 94, passed away on Sunday afternoon in Albuquerque, according to his son Kevin Newman.

Pvt. First Class Newman was originally from Whiskey Creek, north of Crystal, New Mexico, and joined the Marine Corps after hearing about the attack on Pearl Harbor.

Alfred Newman said he read about the history of the Marines and wanted to become one, according to a 2010 interview with the Library of Congress Veterans History Project.

In November of 1943, Newman and other Navajo Code Talkers shipped out to Guadalcanal before he made his way to Bougainville Island.

After a month on the island, the Marine was shipped out with the Third Division and headed for Guam where he saw his first action.

Eventually, he landed in Iwo Jima. There, he said, he heard the American flag was raised on Mount Suribachi.

“Thank you papa for everything you are – faithful, loving, strong, gentle, courageous,” his son wrote on his Facebook page.

There is no official count of how many of the Navajo Code Talkers are left who served during World War II, but most agree there are less than 10.

No funeral date has been set.